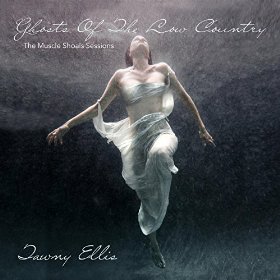 Tawny Ellis is a talented singer and songwriter who also works in the realm of sculpture, and makes jewelry as well. In addition, she is a lap steel player, as can be heard on her new EP, Ghosts Of The Low Country: The Muscle Shoals Sessions. This CD contains two original compositions and two covers, and features members of the Athens, Georgia band Five Eight (and actually, one of the two covers is a Five Eight tune). Tawny Ellis herself is from Georgia, but is now based in Los Angeles.

The EP opens with one of the original tracks, “Ghosts Of The Low Country,” which was written by Tawny Ellis and her husband Gio Loria, who plays dobro and Hammond B3 on this one. But right away what will grab you is Tawny Ellis’ voice. It is one of those voices perfect for country and folk, sweet and intimate and full of heartache. “They’re the ghosts of the low country/Coming out of the river, washing over me/Singing songs in sweet harmony/Whispering secrets to me/They’re the ghosts of the low country.” Five Eight’s Sean Dunn and Patrick Ferguson play on this track, on electric guitar and drums respectively, and Tawny Ellis plays lap steel. This is a moving composition. “How many years must you walk/To find your way back home/So many tears, oh, they’re falling/Calling you back home.”

It’s followed by the other original tune, “Evolve Or Die,” which was written by Tawny Ellis and Walter Spenser. It has a wonderful gospel folk vibe, and features some nice work on drums by Patrick Ferguson and on guitar by Gio Loria. “’Cause hell’s a big place with an open gate/But heaven’s calling/For there I’m bound/The bells are ringing/Can’t you hear the sound.” There is a positive bent to this track, in lines like “But I can change this/It’s not too late/To let the light in/’Til the darkness fades” and “My breath is steady/And my mind is sound/My heart is full now/With love abound/I hear bells ringing/Come gather round.” What I like also is the earnestness of the song, of its delivery. This is a song that Tawny Ellis had recorded and released earlier; it was the title track to her 2008 CD.

“Desperate Tonight” is a Five Eight tune written by Mike Mantione and included on that band’s 1992 release, I Learned Shut Up. Tawny Ellis’ rendition features two members of that band – Sean Dunn on electric guitar and Patrick Ferguson on drums. This is a wonderful song, and Tawny Ellis’ rendition is beautiful. She really pours her heart into it. I love these lines: “I’ve chosen my weapon and it’s silence/Complete with my trusted friend arrogance.” The EP then concludes with a kind of sweet, relaxed rendition of “Walkin’ After Midnight,” the song written by Alan Block and Donn Hecht and made famous by Patsy Cline. Tawny Ellis plays lap steel on this track. And something in her voices makes me believe her when she sings, “I walk for miles along the highway/Well, that’s just my way of saying I love you/I’m always walkin’ after midnight/Searching for you.”

CD Track List
Ghosts Of The Low Country: The Muscle Shoals Sessions is scheduled to be released on November 6, 2015.
Posted by Michael Doherty at 8:22 PM