Revenge Of The Mekons DVD Review 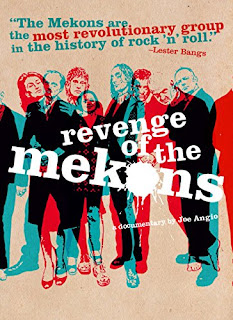 If you are not familiar with the music of The Mekons, watch the new documentary Revenge Of The Mekons and become an instant fan. The Mekons started as a punk band in Leeds in 1977, and have grown and changed and become better and better over the last thirty years. This film tells the story of the band basically in chronological order, with lots of delightful tangents. It opens with some quotes about the group, including Lester Bangs’ “The Mekons are the most revolutionary group in the history of rock ‘n’ roll,” played over that great riff to begin “Where Were You.” Then we see them performing that very cool punk tune, and, if you don’t know the band, you might be surprised to see an accordion and fiddle.

This is a band that has gone through a lot of changes, which are documented here, but remained true to themselves. And maybe it’s because of that that they are simultaneously loved and largely unknown. There is a funny and sad moment when someone from the audience alerts the band onstage that their next gig in Sheffield has been canceled. (It feels like something from Spinal Tap.) It’s only like six minutes into the film and you already love these guys and care about them. The scene continues, and the audience member says that tickets are no longer available, and suggests that perhaps the show is sold out. The band immediately dismisses that conclusion. Singer Sally Timms says, “Sold out is not a phrase that ever comes into our lives.” And then in an interview she says, “Success is the thing that usually kills bands in the end, so we haven’t had any success.”

That depends on how you define success, I suppose. Just their longevity, whether it is from pure stubbornness or what, seems to indicate they’re successful. Plus, the band clearly has a joy about what they’re doing. After all, hey, they can’t possibly be in it for the money.

The film includes plenty of interviews with band members, past and present, including Mark “Chalkie” White, Kevin Lycett, Tom Greenhalgh, Andy Corrigan, Jon Langford, Ros Allen, Sally Timms, Sarah Corina, Robert Worby, Steve Goulding, Dick Taylor, Susie Honeyman, Lu Edmonds, and Eric Bellis (Rico Bell). They talk about having real jobs, and about the gig where U2 opened for them in Dublin. They also talk about writing songs, and the film treats us to a glimpse of the process of a song coming together and later being recorded and then being performed. And of course they talk about the evolving sound of the band, how they got interested in folk music, and how The English Dancing Master resulted from that, and how the Mekons tried to do country, and came up with something new and different. Band members are quite candid, and they certainly have a sense of humor about themselves. Mark “Chalkie” White talks about leaving the band: “I couldn’t sing. I couldn’t play anything. And as the others got better at it, I didn’t.”

There are also interviews with music critics, fans and other musicians. Bob Last, of Fast Product Records, says about the band in the early days: “I think really the critical thing was that they just clearly could not play, but they’d listened to some pop, and I loved the fact that there would be these moments that were like a photocopy of the bit of pop, even though they hadn’t a fucking clue how they should actually construct it.” There is early concert footage of them performing “Never Been In A Riot,” which they say was inspired by, and is a response to, “White Riot” (and yes, there is a bit of footage of The Clash performing that song). Kevin Lycett says: “I’ve not been in a riot. In fact, I’m frightened of being in a riot. In fact, the police scare the living shit out of me.”

The film includes footage of the band rehearsing for a tour. Plus there are lots of wonderful old photos, including an early press photo, which is mostly of friends of the band. And there is footage of Kathy Acker performing with The Mekons (that crazy pirate nonsense), as well as footage of that Vito Acconci Mekons exhibition (and an interview with Acconci about it). The movie also explores some of the other interests and pursuits of band members.

This is one of the best music documentaries I’ve seen. I knew nothing about this band coming into it, and now have not only an appreciation for their music, but a real love of this band, and a desire to purchase everything they’ve ever recorded (with the possible exception of that pirate album). And be sure to watch all the credits, for there’s an extra little bit at the end.

This DVD contains approximately an hour and a half of bonus material, including a concert performance filmed at the Bell House. At the beginning, Sally mentions that it’s the full band playing that night, and says, “It will be as rubbish as it always is, but there are more of us, so the blame is spread.” The set features some more joking around and teasing among band members. The show includes “Thee Olde Trip To Jerusalem,” “Diamonds,” “Afar And Forlorn,” “Geeshie,” “Heaven And Back,” “Orpheus,” “Fletcher Christian,” “The Curse” and “Memphis, Egypt.” It’s approximately thirty-eight minutes.

The special features also include more interviews, including a bit about a column following The Mekons, as well as Rico showing his art space. Will Oldham performs his song “For The Mekons Et Al.” There is a concert poster gallery and the film’s trailer.

Revenge Of The Mekons was directed by Joe Angio, and was released on DVD on July 28, 2015 through Music Box Films.
Posted by Michael Doherty at 12:46 PM