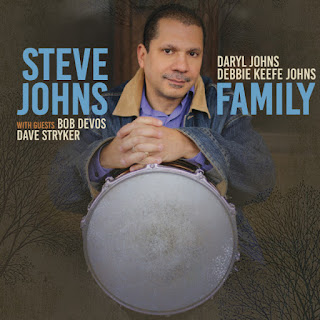 Jazz drummer Steve Johns has appeared on recordings by many artists over the years, including Leon Thomas, George Russell, and Sonny Fortune. His new CD, Family, is his first as bandleader. The aptly named Family features his wife Debbie Keefe Johns on saxophone and his son Daryl Johns on bass. Daryl Johns is already gaining recognition in the jazz world, but interestingly this CD is Debbie Keefe’s first recording. It was produced by Dave Stryker, who plays guitar on several tracks. The other tracks feature Bob DeVos on guitar. (Steve Johns has played on several discs by Bob DeVos, including 2006’s Shifting Sands, 2007’s Playing For Keeps and 2013’s Shadow Box.) This album is mostly original material, with Stryker and DeVos contributing material, in addition to the compositions by Steve Johns. The CD also includes extensive liner notes by Ed Berger, of Rutgers Institute of Jazz Studies.

The CD begins with “Sleepwalk,” the opening of which sounds like it owes something to Bruce Springsteen’s “Spirits In The Night.” There is a bit of a bluesy groove to this tune, which was written by Steve Johns, and features a nice bass solo. Dave Stryker plays guitar on this track. It’s followed by “So You Say,” which was written by Jeff Holmes, and features Bob DeVos on guitar.

“Shadowboxing” is one of my favorites. I love how it opens, almost like it’s already in progress. No easing in. The conversation has already started, and you drop right in, immediately into the expressive and urgent saxophone of Debbie Keefe Johns. This one too features a really nice bass solo, as well as a cool drum solo. It was written by Dave Stryker, who plays guitar on this track. His lead section is another reason why this track is a highlight for me, and I love Steve Johns’ fast-paced drumming beneath it. This is just an all-round great track.

The wild “Shadowboxing” is followed by a mellow, romantic tune titled “Bogie And Bacall,” written by Steve Johns. It begins with some thoughtful, sweet work on guitar by Dave Stryker. Then Debbie Keefe Johns’ saxophone comes in as a passionate voice deep in the night. Beautiful. And it is that voice, that heart that drives this song, though there is also a really wonderful bass lead.

“Mixing” has a kind of funky base, and a light, playful sense about it. It was written by percussionist Airto Moreira, whom I became familiar with years ago through his associations with Grateful Dead drummer Mickey Hart. This composition appeared on Airto’s debut record, 1970’s Natural Feelings. The version here is a bit smoother, a little less frantic than the original. But check out Debbie Keefe Johns’ work on sax.

“Shell Game” also features some really cool work on sax by Debbie Keefe Johns. It was written by Bob DeVos, who also plays guitar on this track. When he takes over on lead, the song has a delicious, kind of bluesy groove, and his playing gets me smiling. This track also features a good bass solo by Daryl Johns. The album then concludes with “Chunk,” which was written by Steve Johns and Jeff Holmes. This one has a great funky edge, with a very prominent bass, and is one of my favorite tracks. There is definitely a sly, playful vibe to this tune which you can't help but like, as well as some wonderful drumming and delightful touches on saxophone.

CD Track List
Family was released on May 5, 2015 on Strikezone Records.
Posted by Michael Doherty at 7:29 PM