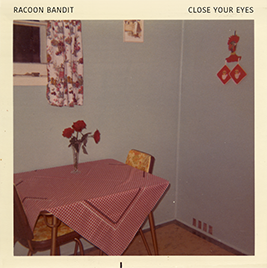 Racoon Bandit is a Canadian band mixing rock, pop and folk elements to great effect and results. The band is made up of Fraser McCallum on vocals and rhythm guitar, Roger Carter on drums and keys, Scott Gallant on bass and Adam Gallant on vocals and lead guitar. Their new album, Close Your Eyes, the follow-up to 2011’s Into The Hills, offers some wonderful original material, as well as one excellent and unusual choice of covers.

Racoon Bandit opens the new CD with “Searcher Song,” which, with those touches on lead guitar, right away gives you the feeling of someone out in the desert somewhere, alone, but that steady rhythm adds a sense of urgency or foreboding. And when the song kicks in, it becomes kind of catchy, and the vocals feels like they’re descending on us from the heavens. The whole thing works so well, having a sort of late 1960s psychedelic element that pulls you into the world of the song. It’s followed by “You Got Into It,” which has such a different feel. This is more in the country realm, with a more upbeat vibe. There is something kind of catchy about this one as well, and I absolutely love the bass. “And you and me know we could do better/I think you would agree that we could do better.”

“Skin Of Your Teeth” is one of my favorites. It has this delightful, positive pop vibe right from the start, and the sound has me smiling every time I listen to it. I really like the vocals, which have a friendly feel. It’s just an all-round wonderful tune. And it’s followed by “I’m Waiting,” another favorite. This one too is quite catchy, and I find myself moving to its groove. There is an easy-going vibe to some of these tracks, yet they also dig themselves into your brain and make a welcome home there. “But you said that you’d be back soon/I’m waiting, I’m waiting.” I like the pause before the second “I’m waiting,” which really works to give you the sense that he’s actually waiting. I just totally love this track.

I also really like “Believe Me,” which is such a pretty song, with some good lyrics. “Closed the door on anyone who tried to tell me it was all in my mind.” “Please don’t close your eyes/To the light that surrounds you/I just want for you this time to believe me.” And the addition of strings here is perfect, making the instrumental section really rise above. Interestingly, this pretty track is followed by a slightly goofy and delightful short instrumental track titled “The Piano Tuner.” This is the CD’s only instrumental tune.

“Teenage Wasted Love” is more of a powerful pop rock tune, with sweet vocal work. “And you know it’s gonna hurt so bad/I can’t give in to anybody/Some things last forever.” And then, “Now I know that nothing lasts forever.” This song really captures the emotions and viewpoint of those teenage years, especially with the repetition of “I don’t know” partway through. And there is a beauty to this track.

The album concludes with its only cover, “Passing Through,” which was written by Dick Blakeslee. Leonard Cohen covered this one on Live Songs. He also sang it briefly (just a line or two of it) at one show I attended several years ago, much to the delight of me and everyone else there. It's a great song that has also been covered by Pete Seeger, The Highwaymen, and others. And Racoon Bandit's rendition is used as the theme song for the Canadian web series Just Passing Through. And yes, I love Racoon Bandit's version. It's another of this album's highlights.

CD Track List
Close Your Eyes is scheduled to be released on August 21, 2015.
Posted by Michael Doherty at 3:52 PM