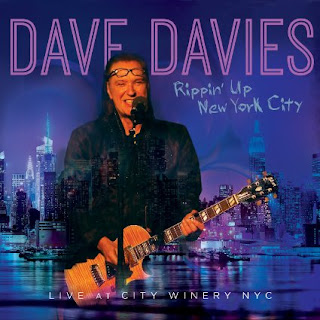 Last year Dave Davies released a new studio album titled Rippin’ Up Time, and now he has a new live album coming out, which was recorded at the City Winery in New York and is appropriately titled Rippin’ Up New York City. It was actually recorded last year, on November 24 and 25, just a month after the studio album was released. It has that raw energy we always expect from Dave Davies, and features a good mix of material from the new album and some great Kinks classics (including my all-time favorite Kinks song, “Strangers”).

The CD opens with the title track from last year’s release, “Rippin’ Up Time.” (Actually, there is a 38-second introduction, but that doesn’t necessarily need to be a separate track.) “Rippin’ Up Time” is harder rock tune, and a good one with which to kick off the show. This version is oddly almost an instrumental rendition, with only a bit of the lyrics near the beginning and again near the end. And it’s actually a bit shorter than the studio version. It’s followed an early Kinks song, “I’m Not Like Everybody Else,” which was written by Ray Davies but on which Dave sang lead, and then “I Need You,” another early Kinks tune, a great rock and roll number. This version has a lot of energy.

That is followed by a couple of tunes from early Dave Davies singles. “Creeping Jean” was released as the flip side to Dave Davies’ single, “Hold My Hand.” The version on this live CD is titled “Creepin’ Jean,” and it has a nice little rock jam in the second half. “Suzannah’s Still Alive” is a really cool tune, one of my favorites on this CD. It was originally released as a single in 1967, then spelled “Susannah’s Still Alive” on most of the copies, and as “Suzanah’s Still Alive” on some. The new spelling seems a combination of the two. He also does “Death Of A Clown,” his first solo single.

Dave Davies introduces “See My Friends” as one of his favorite Kinks song. Though it is listed as “See My Friend” on the CD case, Dave clearly refers to it as “See My Friends” in his brief introduction. This is a fantastic psychedelic tune with Indian influences, and the version on this live album is a wonderful, extended rendition (at approximately seven minutes, it’s the longest track on the CD). Dave introduces the band at the end of the track. “See My Friends” was written by Ray Davies. It’s followed by my favorite Kinks song, “Strangers,” from Lola Versus Powerman And The Moneygoround Part One, one of my personal favorite records. Dave introduces it by saying: “None of us are really strangers. We are all connected.” Interestingly, this rendition begins with the drumbeat which ends the studio version. I absolutely love this rendition. Dave Davies delivers such a great vocal performance here, giving the song nuances that the studio version doesn’t have. It is so moving. Just listen to him sing lines like, “I’ve killed my world and I’ve killed my time” and “So I will follow you wherever you go/If your offered hand is still open to me” and “This love of life makes me weak at my knees.” There is also some added stuff on guitar that is wonderful. I highly recommend checking out this track. Dare I say it might be better than the original? Yes, yes, yes.

After “Strangers,” he asks the audience if there are any requests. A lot of things are shouted out, and Dave picks “Flowers In The Rain,” a truly pretty tune from his 2002 solo album Bug. He does a couple of other tunes from Rippin’ Up Time – “Front Room” and “King Of Karaoke.” Both of these songs look back at the 1960s, including nods to specific Kinks songs. They’re good tunes, but I do wish he would have done “Nosey Neighbors” and “Mindwash,” two of my favorites from the studio album.

The most recent Kinks song Dave performs on this CD is “Living On A Thin Line” (here titled “Livin’ On A Thin Line”), from the 1984 record Word Of Mouth. I’ve always loved this song, and I listened to this cassette (yes, cassette) over and over when it came out (that album includes the hit “Do It Again,” but “Living On A Thin Line” might be the record’s best tune). The album then concludes with three classic Kinks rock tunes: “Where Have All The Good Times Gone,” “All Day And All Of The Night” and “You Really Got Me.” “You Really Got Me” holds a special place for me, for when I got my drum kit at the age of thirteen and my friend across the street got his guitar, it was the first song we ever tackled (unless my memory is faulty or dishonest).

CD Track List
Rippin’ Up New York City: Live At City Winery NYC is scheduled to be released on September 4, 2015 through Red River Entertainment.
Posted by Michael Doherty at 12:25 PM