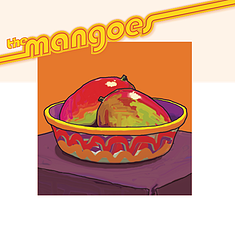 The Mangoes is the new project of Bret Bingham and Tim Morse, and the band’s self-titled debut album is a concept album with a narrative about a struggling musician who becomes obsessed with a woman (the story is outlined in the CD’s liner notes). This is an unusual pop album that takes us in interesting directions, like some nutty hipster film created by a team where each person gets to contribute a section, leading to several different sounds, different voices, and somehow adding up to something kind of wonderful. It’s pop, sure, but dips into rock, jazz, and other genres, so even if you don’t like every song here, you’re bound to enjoy at least a few, regardless of where your taste lies. The album has a sense of humor, which I appreciate, but that also doesn’t stop it from having moments of beauty, as in “Headed For A Fall.”

It opens with “I Told You So,” a very catchy, bright-sounding pop song, which is directed at the female character of the story, Candy, who has made it in the music business. Billy, the album’s protagonist, sings to her, “I never had a doubt that/One day they’d be blown away/By the talent that is you/And that’s all I’m gonna say.” But that’s the beginning of the song and of course that’s not all he’s going to say. The song has a certain sense of humor about it, as later he sings, “But I guess there’s one more/Thing I really ought to say/Yes, I got myself a lawyer/And if I get my way/I’ll have royalties/Along with my flat fee/And a fair percentage of your gross proceeds.” Ah, love and the music business.

It’s followed by “Mango Overture/Over.” The “Overture” has sound effects of a car radio finding a bit of “The Mangoes Theme,” and feels a bit pointless. It leads straight into “Over,” about struggling on the road and knowing it’s going nowhere (“The crowd’s a no-show”). There is a Beatles influence that can be heard at moments on this track, and on others. “Barista Girl” is a fun and kind of silly tune, a love song dedicated to the chick behind the counter at Starbucks. “Barista girl, pants so tight/But I’m only her amigo/Oh, I travel far/I wait so long in the Starbucks line/For barista girl.” It has a wonderful vibe about it, like a Latin country song, and some lines that had me laughing. Then “Samba Mambo” is a cool instrumental track, and we can imagine Billy and Candy sizing each other up, and the coffee shop disappearing around them as the world focuses on just these two as they begin their dance.

“The Future (Will Be Yours)” is one of my favorite tracks. It has this sly, slick hipster jazz vibe, with a sense of humor, and I totally dig it. How can the girl help but buy into the fantasy, as he sings to her, “Hey girl, there’s magic in the air/And there’s money everywhere.” And I love the bass. That’s Scott Southard on bass on this track.

With “Stupid Chorus,” the album suddenly goes in a techno pop direction. It’s unexpected and definitely not my favorite track. But in the story of the album, it’s the song that gives Candy and Billy a minor hit. And the song is sort of poking fun at its very genre, with lines like “Stupid chorus, stupid chorus/Like a ringtone in our brains” and “Feel the sterile bass drum beating.” Hope Rogers performs the lead vocals on this track. That tune is followed by “Brickwall,” which has shades of They Might Be Giants, and reminds me a bit of certain songs by Jim Infantino, at least during the chorus. “I like the music when it’s free/It sounds good to me/I like the music when it’s louder/I like the music when it’s free.”

“Headed For A Fall” actually has a pretty feel to it, helped by the cello, an instrument I’m always happy to hear. (That’s Rebecca Roudman on cello.) This is another track that has a Beatles influence. “And all I ever wanted was to make her a star/Just a little more time, I could take her real far.” And then “200 Yards” is a good pop tune about dealing with a restraining order. “Thanks my dear pumpkin/For the legal injunction/I’m not backing down/I’m still hanging around.”

“Epilogue” is a sort of progressive instrumental track. Oddly, there are two more tracks after “Epilogue.” The first, “Broken Soul,” is like a message from the grave. The second, “The Mangoes Theme,” doesn’t really seem to have anything to do with the narrative of the rest of the album, but it's fun and goofy and short, so just enjoy it.

CD Track List
The Mangoes was released in the fall of 2014.
Posted by Michael Doherty at 8:08 PM