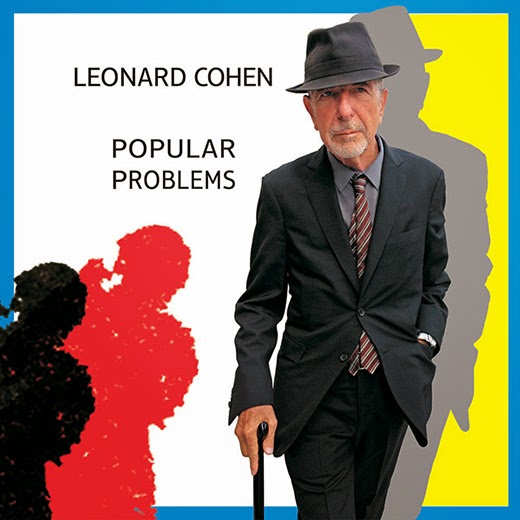 Leonard Cohen is the greatest living songwriter. I’ve said that before, and I’ll likely say it many more times. On September 21, 2014 he turned eighty. Two days later his excellent new album, Popular Problems, was released. Fans who caught shows on his recent tours will be happy that “Born In Chains” is included on this new release. Sadly, once again “Feels So Good” has been given a miss. But there are some surprises on this disc. For example, Leonard Cohen dips a bit into the blues on this release. Also coming as a surprise to me is the fact that only one of the folks who performed with him on his recent tours is present on these tracks – Alexandru Bublitchi, who played violin on the Old Ideas tour, plays on three of these songs. There are some odd rhymes on this album, like in “A Street,” which rhymes “bath” with “camouflage,” and in “Nevermind,” where he changes the pronunciation of the adjective “intimate” to make it rhyme with “fate.” But Leonard Cohen can do these things, and make them work. The majority of the songs on Popular Problems were co-written by Leonard Cohen and Patrick Leonard, who had teamed up for a few of the songs on Old Ideas.

A bluesy pulse opens the album’s first track, “Slow.” Then Leonard Cohen comes in, a deep intimate whisper right into our ears: “I’m slowing down the tune/I never liked it fast/You want to get there soon/I want to get there last.” He can make any line sound sexy, and he does so here with “Slow is in my blood,” and of course on these lines: “I like to take my time/I like to linger as it flies/A weekend on your lips/A lifetime in your eyes.” Charlean Carmon joins him on vocals on this track (and on several others).

Leonard Cohen follows that with another song with blues elements, “Almost Like The Blues,” this one combining blues and pop, but with some intense lyrics to start – “I saw some people starving/There was murder, there was rape/Their villages were burning/They were trying to escape” (perhaps bringing to mind some of the lyrics from his 1992 release, The Future). But there is always something of a sense of humor in his approach, as you can hear when he follows “There’s torture and there’s killing” with “And there’s all my bad reviews.”

“Samson In New Orleans” is one of my favorite tracks. Check out these lines: “So gather up the killers/Get everyone in town/Stand me by those pillars/Let me take this temple down.” This track features some deliciously sad and pretty work on violin by Alexandru Bublitchi.

“A Street” was co-written by Anjani Thomas, who also co-wrote some tracks on Dear Heather and one track on Old Ideas.  Here is a taste of the lyrics: “You put on a uniform/To fight the civil war/You looked so good I didn’t care/What side you were fighting for.” This song has a simple, steady beat, with Leonard Cohen delivering the lyrics almost like spoken word, and again with a feel of him being right there, speaking directly to you. There is more evidence of his sense of humor in lines like “Just like an extra in the sequel/To the old red white and blue.”

“Did I Ever Love You” is perhaps the most unusual track on the album. It begins with Leonard Cohen singing, “Did I ever love you/Did I ever need you/Did I ever fight you/Did I ever want to/Did I ever leave you,” and there’s a real need in his voice, a need for the answers. There is a really rough quality to his voice, approaching Tom Waits territory, which gives a feel of urgency and immediacy to the lyrics. And then the song becomes a bright, cheerful country tune, as Dana Glover takes over on vocals, singing the same lyrics, but sweetly. It’s such an unusual approach, and I love it. Alexandru Bublitchi adds some beautiful touches on violin.

“My Oh My” is another personal favorite on this album. This is one he was working up during the tours, but at that point the song sounded quite a bit like the previous album’s “Banjo.”  It has now developed to the point of having its own feel, and it’s absolutely fantastic. He can really imbue a simple line like “My oh my oh my” with a vivid background and a lot of emotion. “Drove you to the station/Never asked you why/Held for you a little while/My oh my oh my.”

“Nevermind” is an interesting track, with some excellent backing vocals by Charlean Carmon and Donna Delory. But it is the lyrics, of course, which really grab me, with lines like “Expressions of/The Sweet Indifference/Some call Love” and “You side with them/Whom you despise/This was your heart/This swarm of flies/This was once your mouth/This bowl of lies” and “My woman’s here/My children too/Their graves are safe/From ghosts like you.”

“Born In Chains” is a song Leonard Cohen introduced on the world tour, one which immediately became a favorite with fans. Its absence from 2012’s Old Ideas can now be accepted, as the rendition included on Popular Problems is excellent. (And now please, please, please include “Feels So Good” on the next release. Thank you.) Here is a taste of the lyrics: “But all the ladders/Of the night have fallen/Only darkness now/To lift the longing up.” I really like what Patrick Leonard does on keys in this version.

The album ends with “You Got Me Singing,” a really sweet folk-country song that raises my spirits every time I listen to it. “You got me singing/Even though the world is gone/You got me thinking/That I’d like to carry on.” It’s an incredible song, feeling like a warm smile just before the end of everything. This is one of my favorite songs of the year.

Popular Problems was released on September 23, 2014 on Columbia Records.
Posted by Michael Doherty at 10:40 PM