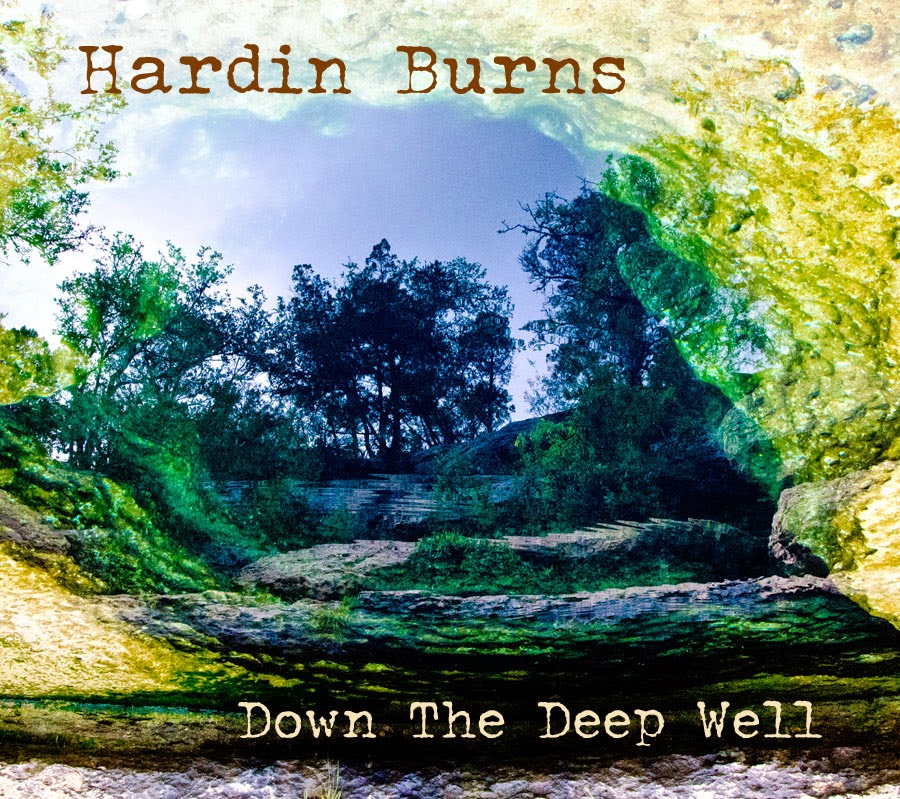 Hardin Burns is the duo of Andrew Hardin and Jeannie Burns, both of whom are quite familiar to music fans. Andrew Hardin is known for his work with Tom Russell, as well as for his solo work. Jeannie Burns is of course known for her long career with the Burns Sisters. Andrew and Jeannie began playing together several years ago, and Down The Deep Well is the duo’s second full-length album (their first, Lounge, was released in 2012).

This new CD features mostly original material, with one exception, that being a cover of Richard Thompson’s “Walking On A Wire.” Not a bad choice, as you really can’t go wrong with Richard Thompson. The music is a wonderful combination of country and folk, with elements of the blues. These songs have an acoustic base, but also contain electric guitar and keyboards. There are plenty of good grooves on this album, and Andrew and Jeannie are joined by Dony Wynn on drums, David Carroll on upright bass, and Gabriel Rhodes on keyboard and accordion.

“Down The Deep Well”

The CD’s first track, the title track, opens with a cool, hypnotic, steady rhythm on drums and guitar. Andrew Hardin takes lead vocal duties on this track, with Jeannie joining him on the chorus (and I like the way she echoes “I went down”). I love this song’s groove, and the way the vocals during the verses really work as part of the rhythm, having almost a percussive quality. Here is a taste of the lyrics: “I heard a commotion/I let go of the notion/I drank of the potion/I was feeling fine/I achieved locomotion/Then I sat by the ocean/And I realized it was all in my mind.” This song also features some nice work on electric guitar during some brief lead sections. And check out what Jeannie does on vocals toward the end.

“Back Porch” has a more relaxed vibe, with Jeannie Burns on lead vocals. Something about her vocal approach at times reminds me a bit of Harry Nilsson at the end of “Everybody’s Talkin’” when he sings “I won’t let you leave my love behind.” I’m not sure exactly what it is, but that keeps getting in my head. I like that she then has this excitement when she sings, “Come on, kiss me one more time.” There is some good work on guitar here, with a bit of a Latin feel that is really nice.

“Gentle Rain” has a deliciously mellow vibe, with a kind of quiet power. Jeannie Burns gives a really interesting vocal performance here. “It’s crazy, but maybe/When I turn, you’ll be waiting/On the streets of New Orleans/We’ll sing our song.” And I like these lines: “Memories got a hold on me/I follow them down.”

“The Call” has a cool country vibe and a vocal line that at times reminds me of Bob Dylan – the rhythm of it, that is, not the sound. This track features a nice lead guitar part by Gabriel Rhodes.

“Ache” is a song that hooked me from its opening lines: “You don’t write/You don’t call/And it don’t change a thing at all.” Ah, the power and insistence of love. Soon she sings, “I like awake and ache for you.” It’s such a simple line, but she delivers it with this wonderful combination of desire, sadness and acceptance. She acknowledges an inability to fight it. Though of course there is still the desire to, as she indicates in lines like “Why did I let you go” and “Turn back the hands of time/And give me a chance to change my mind/And you’d be here right next to me.” This is such an excellent track, one of my favorites of this release.

Jeannie Burns expresses a similar desire in “Get Back Home,” with the line “If I could turn the time around.” But this time she has the opposite purpose in mind, to avoid someone rather than to hold onto someone, as the following line is “And just sit out, not take that dance.” And I love these lines: “I took your hand/That’s when it all went wrong.” This is another of my favorites.

The album’s sole cover is a version of “Walking On A Wire,” a song by Richard Thompson and originally recorded by Richard And Linda Thompson and released on Shoot Out The Lights. Andrew Hardin and Jeannie Burns do a really good job with it. Terry Burns provides backing vocals on this track.

Down The Deep Well concludes with “Wave Of Your Hand,” a song that finds Andrew Hardin providing lead vocals on the first verse. There is a bit of a bluesy feel to this one, particularly in the electric guitar.

Down The Deep Well is scheduled to be released on October 28, 2014. By the way, in the artwork on the back cover of the CD, is that armadillo imitating that bird, or is it about to have its way with it?
Posted by Michael Doherty at 7:31 PM