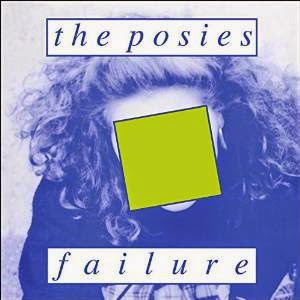 I’ve often said that pop music went wrong in 1986. But that certainly doesn’t mean that nothing good came from the late 1980s. After all, we had some great albums from R.E.M and Tracy Chapman. And in 1988, The Posies released Failure. This wonderful album was originally released only on cassette, and then on vinyl and CD the following year. I didn’t get the chance to listen to it then, because at the time I was getting into the Boston folk scene. But I do wish it had been on my radar, because I think I would have dug it.  But the new re-issue gives me the chance to enjoy it now. And this re-issue includes several bonus tracks, including some really cool instrumental tracks. This album shows how good pop can be.
“Blind Eyes Open”

The album opens with “Blind Eyes Open.” Once this song kicks in, it becomes a catchy rock number, with just a bit of a punk feel at times. I really like that powerful, kind of raw delivery of the vocals on the chorus: “Now you’ve made your blind eyes open/And so light streams in/Everything’s clear as crystal/Enlightenment.” I also dig lines like “The rites of spring have no meaning in my brain.”

An instrumental demo of this tune is included in the bonus tracks. This track was also included as a bonus track on the 15th anniversary edition of Failure.

I’ve never been a patient person, and these early lines from “The Longest Line” jumped out at me the first time I listened to this CD: “I’ve had all I can take of patience and kindness/I can’t wait in this line any longer.” I can totally relate. And those delightful lines are not the only thing making “The Longest Line” one of my favorite tracks. This song has a fun, quick rhythm on acoustic guitar and wonderful vocals. When pop works, this is what it sounds like. This is such a great tune.

There is kind of an odd feel to “Like Me Too,” a song that seems to be coming from an awkward teenager at times. It has some really amusing lines, like “But you call me immature because I’m too sensitive to your insensitivity” and “You’re about as human as the Statue of Liberty/But maybe you’ll like me too.” I love that he follows an insult with a line that is both an admission of attraction and a hope that it’s mutual. And I really like the short guitar instrumental section toward the end.

The bonus tracks include a demo version of this tune, and in this version the electric guitar in that section seems to come out of nowhere, and then disappears so quickly.

“I May Hate You Sometimes”

“I May Hate You Sometimes” has a happy mid-1960s pop feel that you’ll either love or hate. I love it. This fun tune has lots of lines that stand out, such as “But things have changed/And now you’re only happy when I remember where my place is” and “I can’t be everything to everybody/Could I at least be something to you” and “If I can’t live with myself, how could you live with me.” And for some reason, every time I listen to this song, the way they sing the line “But I’ll always love you” reminds me of a song from Shock Treatment.

The bonus tracks include a demo version, in which you can hear them testing the vocal microphone at the beginning. There are no drums on this version, and the bass line is more prominent and delicious.

“Paint Me” is another really good pop tune with a catchy riff and good vocals. Here is a taste of the lyrics: “I may be color-coated/But that won't hide the fact/That under shades of lifeless gray/I'm painted darkest black.”

There is a demo version of this song in the bonus tracks. It feels like it might be just a bit slower, and it doesn’t include the intro or outro, but I really like this version. I might actually prefer it to the regular version. It was also included on the 15th anniversary edition of the album.

“At Least For Now”

“At Least For Now” is probably my favorite track. It has a kind of sweet vibe, painting a sad portrait to start, but with a positive sound to the chorus. These are some of the lines that stand out for me: “A healthy dose of deep depression/Keeps you comfortably smug/Life without you can’t imagine/It’s become your favorite drug” and “Now gazing at your own reflection/Makes you want to smash the mirror.” It’s just a really good song.

An instrumental demo of the song is included in the bonus tracks. This is the only previously unreleased track on the CD, and it’s a good one.

The original album ends with “What Little Remains,” another interesting pop song. I really like this line: “You’re at war with yourself, and I’m stuck in the middle of it.”

This re-issue includes approximately twenty-five minutes of bonus tracks. Besides the tracks I’ve already mentioned, there is a live version of “Believe In Something Other (Than Yourself),” with a bit of stage banter at the beginning. This rendition is guitar and vocals. It was originally released on 2000’s At Least At Last.

“Alison Hubbard” is a great rock instrumental number with a good youthful, raw energy. This is one of my favorite tracks, and was originally released on the 15th anniversary edition of Failure.

“After Many A Summer Dies The Swan” is an interesting and very short instrumental track with an unusual vibe (reminding me a bit of Frank Zappa or very early Phish).

The Posies are Jonathan Auer and Kenneth Stringfellow.

This special re-issue of Failure was released on August 19, 2014 through Omnivore Recordings. It was released on vinyl as well as CD.
Posted by Michael Doherty at 6:49 PM