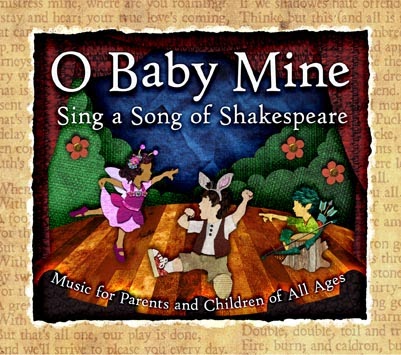 I’m of the opinion that it is never too early to start your children on Shakespeare. I think it’s easier for kids to pick up the language early on. If you wait until they’re teenagers, it may be more of a struggle for them. O Baby Mine: Sing A Song Of Shakespeare is a collection of songs based on the works of William Shakespeare, and is aimed at children and parents. I am neither, but I am enjoying the CD all the same. The title of the CD is a play on “O Mistress Mine,” from Twelfth Night (a song that was covered by Paul Kelly on his 2012 release, Spring And Fall).

Different artists contribute their takes on the works of the bard, focusing on the comedies and tragedies. The histories are not really represented, which isn’t all that surprising. But it is somewhat surprising to find the sonnets likewise unrepresented here. Besides Twelfth Night, there are songs inspired by As You Like It, A Midsummer Night’s Dream and other comedies. It’s nice to have The Two Gentlemen Of Verona represented here, by “Who Is Sylvia?” a short tune which has a fun New Orleans flavor, and vocals that have shades of Paul McCartney.  And it’s cool to have a song inspired by the plot of The Comedy Of Errors (“Do You Think You Have A Twin?”). There are also some songs inspired by the tragedies, including one, of course, inspired by Romeo And Juliet (“Nightingale’s Lullaby,” a sweet tune with cello).

O Baby Mine opens with “Up And Down,” which begins with a child reciting Puck’s lines from Act III Scene II of A Midsummer Night’s Dream: “Up and down, up and down/I will lead them up and down.” The song then kicks in, and has the feel of a groovy folk tune. I only wish the lyrics were delivered with an even more mischievous air, as Puck might sing them. These are lines regarding Lysander and Demetrius, with Puck promising to keep them from harming each other. And though the song’s lyrics are all lines by Puck, some of them are from different scenes. For example, the next lines (“I’ll follow you. I’ll lead you about a round”) are from Act III Scene I, and are about the mechanicals. And “Lord what fools these mortals be” is from Act III Scene ii.

“Shakespeare Said It First” is a song about how people often quote Shakespeare without knowing it, and offers many examples, such as “heart of hearts” and “Give the devil his due.” This song could be a lot longer, as there are many, many more examples to choose from (like “dog will have his day”). This song is presented with simply vocals and keys, both performed by Cinco Paul, who also wrote the song. There is a definite sense of play, but it is a song for adults as much as for children, as most folks are completely unaware of how often they refer to Shakespeare’s works.

“There Are Bees” is a delightful folk song written and sung by Madison Scheckel. The lyrics are inspired by a song Ariel sings in Act V Scene I of The Tempest. This is one of my favorite tracks. It has a great feel to it, and there is certainly a joy here. There are some wonderful lyrics, like this line: “And where there’s me there’s always you.”

As I mentioned, the title of this collection comes from a song from Twelfth Night. The title track is a slow, soft, pretty song, the lyrics by Susan Lambert and Rob Kendt, though some of the lines are directly from Shakespeare’s play, such as “Present mirth hath present laughter” and “Youth’s a stuff will not endure.” These lines, by the way, are sung by Feste in Act II Scene iii. This track features some wonderful work by Melissa Wrolstad on violin, Doug Davis on banjo, and Paula Lane on dobro.

This song is featured in two separate versions on this CD: Daddy Version and Mommy Version. The second version has vocals by Madison Scheckel. Rob Kendt plays guitar on both versions, and Doug Davis plays banjo on both. But the second lacks the violin and dobro.

“Witches’ Song” is a combination of two of the witches’ scenes from Macbeth: Act I Scene i and Act IV Scene i. The lines are rearranged somewhat, with the last lines of Act I Scene i being the first lines of the song: “Fair is foul and foul is fair/Hover through fog and filthy air.” The vocals are delivered with a great sense of play by Benita Scheckel and Patricia Ann Lamkin (yes, only two witches in this version). And I love Melissa Wrolstad’s work on violin.  I’ll be adding this track to my Halloween play list.

I was surprised to find that this CD also includes a song based on two very serious speeches of Macbeth’s – the “tomorrow and tomorrow and tomorrow” speech from Act V, and the “Macbeth does murder sleep” speech from Act II.  Though “Out, Out, Brief Candle” actually includes only the one line from the former, “Out, out, brief candle,” and then begins the latter with the word “sleep” from “Macbeth does murder sleep,” and then continues from there (“the innocent sleep…”), which of course changes the tone. Madison Scheckel’s vocals remind me a bit of Nico on this track. This song also features Amy Laura McLean on cello, a beautiful addition.

I go back and forth on which is the greatest artistic achievement of the human race – Hamlet or King Lear. I didn’t expect either of these great tragedies to be mentioned on this album, but “Oh Father” begins with David Tobocman singing of taking his daughters to see King Lear. (This song also refers to Macbeth and Romeo And Juliet.)

And “We Two Alone” is a song based on an incredible speech from Act V of King Lear, when Lear has regained some measure of himself, and some joy at his reunion with his daughter, even as they’re both taken prisoner.

Note: I also posted this review on Pop Culture Beast and Mostly Shakespeare.
Posted by Michael Doherty at 5:10 PM