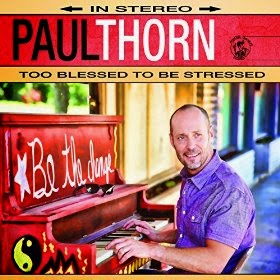 The first time I popped in Too Blessed To Be Stressed, the new disc from Paul Thorn, it was after a long day at work, and I put it in deliberately because of its title. I was feeling a bit stressed out, even though there are a lot of really good things happening now, so I figured this CD was just exactly what I needed to hear. And yes, it put me in such a great mood. There is a sense of humor here, of course, as you might expect from Paul Thorn. It’s a fun CD, though it is certainly not devoid of serious points and thoughts (like in “Mediocrity Is King”). It’s basically everything I wanted.

This CD is mostly original material, unlike Paul Thorn’s previous release, What The Hell Is Goin’ On? from 2012, which was an album of covers. The majority of the songs on this release were written by Paul Thorn and Billy Maddox, though Paul Thorn does a cover of “Get You A Healin’” on this disc.

Paul Thorn kicks off the new CD with “Everything’s Gonna Be Alright,” and from the opening beat on the drums, I am on board. And when the song kicks in, Paul repeats the title line, “Everything’s gonna be alright,” and I believe him. This song makes me think of a backyard party with close friends and family, and a band. A band playing in the afternoon, and just before day becomes night they go into this song. And it’s loud, but not too loud. Just perfect, you know? “I got a front row seat at the apocalypse/With a chili cheese dog and a bag of chips/All the women in heaven got hula girl hips/Everything’s gonna be alright.” Amen.

“Too Blessed To Be Stressed”

Wonderful backing vocals sing the title line to open the album’s title track, “Too Blessed To Be Stressed.” This is a fun track, and there is certainly a bit of funk to it, as well as a blues base. Here is a taste of the lyrics: “Kala was a single mother living with her older brother/After Cornbread got her pregnant, he was absent and neglectant/Then she met a man who gently took her by the hand/He gave her sweet love and affection, and he’s so good to her children/Now she’s too blessed to be stressed.” By the way, the backing vocals are by The McCrary Sisters.

“Everybody Needs Somebody” has such a positive vibe, and it begins like a folk tune, but then has a chorus almost like a rock anthem. And it all works so well. The song delivers a You-are-not-alone message, which we all need to hear now and again. And has the message ever sounded so good as it does here? “I’m just like you, sometimes I get the blues/Every day cannot be a sunny day/My sisters, my brothers, if we lean on one another/Just watch all the clouds roll away.” I love this track. It was written by Ralph Friedrichsen, Paul Thorn and Billy Maddox.

“I Backslide On Friday”

“I Backslide On Friday” is one of my favorites. It just has such a great, friendly feel to it. Paul Thorn sounds like someone you know, and this song in particular feels familiar. This is the chorus, in which he mentions himself in the third person: “Oh, I sin on Saturday, I repent on Sunday/Then I tell myself I won’t procrastinate on Monday/Tuesday I do like I should, Wednesday I do pretty good/Thursday Paul drops the ball, then I backslide on Friday.”

“This Is A Real Goodbye”

“This Is A Real Goodbye” is another favorite. It’s about the end of a relationship, and though there is a blues element, this song is really about the joy of the end, with lines like “There’s no tears in my eyes, this is a real goodbye” and “My future is bright now that I’ve put you in the past” (that second line is one I absolutely love). And I like the work by Michael Graham on keys.

The line that pulls me into “Mediocrity Is King” is “Johnny Cash couldn’t get arrested today.” This is a song about how things have changed for the worse. “Republicans and Democrats are breaking my heart/I can’t tell those sons of bitches apart.” Maybe I’m getting old, but this seems more and more true to me, that mediocrity really is king. Does each generation feel that way? And if so, could it be true – are things getting worse and worse? What a depressing thought. Good thing there are artists like Paul Thorn out there to balance things out a bit.

“Get You  A Healin’” is the album’s cover song, written by Carlo J. Ditta. This is a song with a positive message, a great groove and some wonderful backing vocals which add a delightful gospel flavor. Those vocals are provided by The McCrary Sisters. “Forgive all the people who have ever brought you harm/Get yourself a healing with a lovin’ from now on.” Not bad advice.

“No Place I’d Rather Be”

“No Place I’d Rather Be” is yet one more track that I really like. It’s a sweet, kind of mellow love song that truly sounds loving. Something about the guitar near the beginning makes me think of Billy Bragg, and the vocal performance makes me think of Randy Newman (except on the chorus, which reminds me of Tom Waits). Here is a taste of the lyrics: “When I close my eyes, it’s your face I see/There’s no place I’d rather be/When I return I’ve got a real short list/I want a hug and a big wet kiss/ What we have together means the world to me/There’s no place I’d rather be.”

Musicians appearing on this album include Paul Thorn on vocals and guitar; Bill Hinds on electric guitar, acoustic guitar, slide guitar and backing vocals; Michael Graham on guitar, piano, organ, harmonium, tambourine; Ralph Friedrichsen on bass and backing vocals; and Jeffrey Perkins on drums. The McCrary Sisters provide vocals on “Too Blessed To Be Stressed,” “Get You A Healin’” and “What Kind Of Roof Do You Live Under?”

Too Blessed To Be Stressed was released on August 19, 2014 on Perpetual Obscurity Records.
Posted by Michael Doherty at 12:04 PM