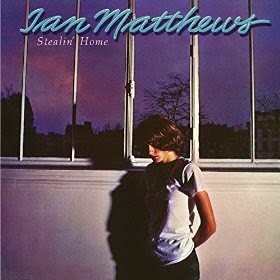 Ian Matthews is known for his early work with Fairport Convention and then with Plainsong, as well as for his extensive solo career. In 1978 he released Stealin’ Home, which included his big hit “Shake It.” The album has some original material, but also lots of covers, including an a cappella rendition of Rodgers and Hammerstein’s “Carefully Taught.” These are mostly mellow tunes, with a few exceptions like “Slip Away” and “Man In The Station,” the latter having just a bit of a disco thing happening, plus some nice work on harmonica by Duffy Power.

The new special re-issue includes the original album, plus a live recording from 1978, which was released previously only in Japan. The concert features a largely different band from that of the album, and includes Bob Metzger on guitar, a name that will be familiar to Leonard Cohen fans. The liner notes for this special edition include an interview with Ian Matthews.

The album opens with “Gimme An Inch,” which certainly has a mid-1970s mellow pop feel, with Ian pleading, “Gimme an inch, girl” at the start. It’s a cover, written by Robert Palmer, who included it on his 1975 album Pressure Drop. I much prefer the album’s second track, “Don’t Hang Up Your Dancing Shoes,” which was written by Terence Boylan. It features a really sweet vocal performance, a nice groove, and some catchy stuff on guitar.

But my favorite track is the absolutely beautiful “King Of The Night,” written by Jeffrey Comanor. Ian’s vocals are excellent, and this song gets right to me. Check out these lyrics: “So empty the bottle and tell us some more/What do you care if we’ve heard it before/The price of your victories cheapens you now/You were fearless and foolish/Forgotten somehow.” And I find this line perfectly depressing: “While the race still goes on without you somehow.”

“Let There Be Blues” is another pretty song, this one written by Ian Matthews. I love the mandolin, and there’s also a nice lead part by Mel Collins on saxophone, but it is those sweet vocals which are the heart of this one. “Let there be blues in the morning/Let there be tears in the night/Let there be blues on my shoulder/Then let me show you it’s alright.”

“Stealin’ Home,” the album’s title track, is an original tune about a problematic relationship. “You tell me I’m your man/And you’re giving me this final chance/To win you back again.” And I love these lines: “I thought I heard it on a jukebox/All the words I couldn’t say.”

“Shake It” was released as a single and was a hit, reaching #13 on the Billboard Hot 100. This one features Mel Collins on saxophone. It has such a good feel to it. Written by Terence Boylan, it includes these lines: “A mind that was made for love/She’s got a new way of dancing slow/She knows what you’re thinking of.” The song feels like a cool summer evening near the beach when you’re young and there’s a woman who catches your attention and won’t let go.

This special release of Stealin’ Home includes a recording of a concert Ian Matthews performed at Texas A&M University in 1978. Titled The Homecoming Concert, it includes some stage banter where Ian asks the crowd about the next day’s big game (and also says, “Hey, what do I know, I’m a limey, I know shit about football”). This is a fairly clean recording, by the way; the sound is good. It opens with a lively number, “Tigers Will Survive,” which features some great work on keys by Mick Weaver, plus some cool stuff on harmonica by Joel Tepp. (This song was the title track from Ian Matthew’s 1972 release.)

That’s followed by a good performance of the album’s title track and then “Shake It,” which Ian introduces by saying, “This next song is a single from the album, which seems to be doing pretty good right now.” A harmonica lead replaces the saxophone lead from the album.

I’m so glad the live tracks include “King Of The Night,” my favorite song from the album. And it’s a really good version, with some nice stuff on both guitar and keys. Ian also does “Call The Tune,” a song from Plainsong’s 1972 record, In Search Of Amelia Earhart (on this new release it's titled “Call The Tunes”). And he closes the show with “Payday,” a good bluesy rock and roll number written by Jesse Winchester, which gives the band a chance to cut loose.

This special edition of Stealin’ Home was released on September 9, 2014 through Omnivore Recordings.
Posted by Michael Doherty at 5:25 PM