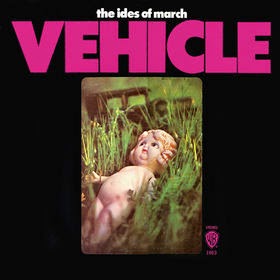 When I was twelve or thirteen, I got a classic rock compilation tape that included The Ides Of March tune “Vehicle.” And I listened to it over and over. But honestly, that was it for me. I never picked up a full-length album from the band. So most of the material on the special re-issue of Vehicle is new to me. And it’s really good. There is a lot of energy in these tracks. Check out “The Sky Is Falling” or “Time For Thinking” for example. Most of the songs are originals, written by lead vocalist/guitarist Jim Peterik, but there are also a couple of excellent covers. This re-issue contains four bonus tracks, as well as new liner notes by Richie Unterberger, with thoughts from some band members.

The album kicks off with the title track, the song the band is most known for. It’s a tune with a great beat and some expressive and excellent work on horns. I’ve always loved the way Jim Peterik delivers the line “Great god in heaven, you know I love you.” And then there is that fantastic guitar part right afterwards. This is such a fun tune, and as a single it reached #2 on the U.S. chart.

That song is followed by “Factory Band,” a Creedence Clearwater-type song, a sort of homage to that great band, with references to their early rehearsal space and some of their tunes. But the song is a good rock number in its own right.

“Home” is quite a bit different from other tracks. Right at the start it sounds like a certain section of “You’ve Lost That Lovin’ Feelin’.” Then when the vocals come in, the song sounds like something Neil Diamond might have done at the time. Seriously. But it’s not long before it takes on its own life, and I like the song. I know I’ve said it before, but I need to make a mix CD of songs titled “Home.” There are certainly a lot of them, and I’ve yet to hear a bad one.

“Wooden Ships” is such a great song by CSN, and The Ides Of March do a truly interesting and unusual rendition of it, mixing in parts of Jethro Tull’s “Dharma For One,” opening with some work on drums, followed by bright tones on horn. It’s wild. And then a couple of minutes in, it calms down and becomes much closer to the CSN original. This is an excellent track, one of the CD’s highlights for me.

There is some great energy in "Time For Thinking," a horn-driven, funky, past-paced rock song. Listening to this track (and others), you get the sense this band must have been something to see in concert.

The original album ended with the band’s take on The Beatles’ “Eleanor Rigby,” titled “Symphony For Eleanor (Eleanor Rigby).” It opens with a good, mean groove, and builds into something rather wonderful. It breathes, pauses, sways, grows, investigates. The vocals don’t come in for the first minute and a half or so. I love the way the “Father McKenzie” verse is delivered. This is certainly one of the best covers of “Eleanor Rigby.” And in the liner notes, Larry Millas is quoted as saying, “the version on the record is nowhere near as good as we used to do it.” Holy shit! I’d love to hear a live recording of this one. This track is nearly ten minutes long, but apparently in concert they played even longer versions.

The CD includes four bonus tracks, all of which were previously released as singles. The first, "High On A Hillside," was the flip side to the “One Woman Man” 1969 single. It features some really nice blending of vocals. "Lead Me Home, Gently" was the flip side of the “Vehicle” single, and is a softer tune. “Melody” was another single in 1970, and it’s a lively track with a great feel to it. The final track is the single version of “Vehicle.”

CD Track List
This special re-issue of Vehicle is scheduled to be released on September 2, 2014 through Real Gone Music.
Posted by Michael Doherty at 7:17 PM