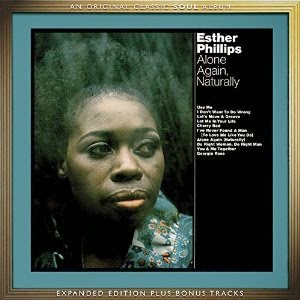 Alone Again, Naturally is a phenomenal album. Recorded and originally released in 1972, it has now been re-issued as an expanded edition with two bonus tracks, as well as liner notes by A. Scott Galloway. Esther Phillips had such an incredible voice, completely owning each song, whether on the slower tracks like “You & Me Together” or on the more groovy tunes like the album’s opener. She was equally at home in blues, jazz, R&B, and any other style she chose to employ.

Esther Phillips kicks off this album with an excellent rendition of Bill Withers’ “Use Me.” Some sweet backing vocals and a kind of funky rhythm open this track. And then Esther comes in, with a sexy, delicious power. It’s a voice you immediately fall for. I’ve heard several versions of this song over the years, but this might be the only one in which you can really hear how good it feels to be used. I completely believe every syllable. And then the horns add to the already great delight of this track.

Esther Phillips slows things down with “I Don’t Want To Do Wrong,” a track that focuses even more on her sexy, fantastic vocals. When she sings, “But I just can’t help myself” that very first time, bringing it down to an intimate level, I just melt. There’s an excellent, though very short, lead on saxophone. And I love the work on keys beneath Esther’s heartfelt vocal performance. Plus, there is some truly interesting work on drums on this track.

“Let Me In Your Life”

“Let Me In Your Life” is a mellow tune, again really focusing on Esther’s vocals. At the beginning, she sings, “I only want to love you/Please don’t push me away/Let me in your life,” and it’s hard to imagine anyone denying her. I could do without the string arrangement, as it feels unnecessary. This song was written by Bill Withers.

It is some nice guitar work that opens “Cherry Red,” a beautiful track written by Joe Turner and Pete Johnson. And again, Esther’s vocals are just incredible. I love what she does on this track in particular, the way she chooses her moments to belt it out, the way she can switch gears so quickly and smoothly. Like the sudden burst on “Squeeze me.” And she delivers some honest blues on the lines, “I ain’t never, I ain’t never/Lord, I ain’t never been loved, and I hope I never will/Because this lovin’ proposition will get a poor body killed/Leave me/Leave me, pretty baby.” And I love that laugh she gives after “I ain’t never been loved.” I also love the way the guitar works almost as a second voice, engaging and commenting with Esther, following and guiding. The bonus tracks include a live version of this song.

Esther gives “Alone Again (Naturally),” the title track, a slightly funky edge. There is something playful in her vocal delivery at moments, which is interesting, in contrast to what she is actually singing here. I’m not sure the strings are needed in this version, at least during most of the song, but the instrumental section with strings in lead is absolutely wonderful. This song was written by Gilbert O’Sullivan.

“Do Right Woman, Do Right Man”

Esther Phillips gives another sexy and wonderful performance in her reading of “Do Right Woman, Do Right Man,” a song written by Chips Moman and Dan Penn, and done by Aretha Franklin. This is such a delicious performance, with power and control.

The original album concludes with “Georgia Rose.” Esther Phillips does a bit of spoken word at the beginning – “You know, sisters, there’s been far too few songs written about us and our beauty/And women of lesser understanding might have been become bitter through the years of neglect” – over some nice jazzy piano and bass.

The CD includes two bonus tracks, both live performances. The first, as I mentioned, is a concert version of “Cherry Red.” At the beginning Esther asks the audience for some applause for the band. And the band certainly shines in this performance.

On the second bonus track, Esther Phillips puts her own spin on the Billie Holiday classic, “God Bless The Child,” a cool, bluesy, jazzy tune. Approximately four minutes in, the song suddenly takes on a livelier tone.

The special expanded edition of Alone Again, Naturally was released on September 2, 2014 through Real Gone Music.
Posted by Michael Doherty at 1:37 PM