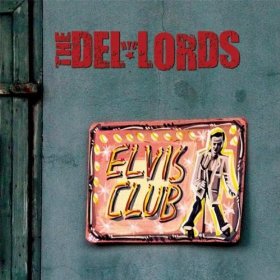 The Del-Lords are all about straight-ahead good rock music. That’s what they were about back in the 1980s when they formed, and that’s what they’re about now in 2013 after re-forming. I first popped in their new disc, Elvis Club, while I was doing my taxes, and it put me in the right frame of mind to deal with that stuff. I had to stop work occasionally, of course, to dance around (like to “Damaged”), or just to enjoy a lyric.

Elvis Club is the band’s first new album since 1990. It’s hard to believe it’s been that long. That was the year I graduated from high school. That was fucking ages ago. Well, you wouldn’t know by this collection of tunes that they’d taken any time off. (And actually, they did release an EP a couple of years ago. Titled Under Construction, it includes rough mixes of several songs that appear on this release.)

The new CD features three of the four original members: Scott Kempner, Eric Ambel, and Frank Funaro. Original bass player Manny Caiati was unable to stay with the band after a short tour in Spain, and so there are actually four different bass players on this recording – Michael DuClos, Keith Christopher, Jason Mercer and Steve Almaas. DuClos is now the official bass player for the band. He also provides some harmony vocals on this album.

Elvis Club features mostly original songs, written or co-written by Scott Kempner. There is just one cover, Neil Young’s “Southern Pacific,” which ends the album. And though this album is rock, it does not have anything like a generic feel. For example, “Flying” has a bit of a folk flavor, particularly in the way the harmonica is played (that’s Nate Schweber on harmonica). “All Of My Life” has good, slower groove. And “Everyday” has a somewhat brighter pop feel (I like the lines, “And I’m walking just a little south of Heaven/Everyday that I’m with you”). “You Can Make A Mistake One Time” has a heavier blues guitar riff. And there is definitely a sense of humor to some of these tracks, like in these lines from “Princess”: “I bit the apple/I bit the snake/I bit Eve/Maybe that was my mistake.”

Elvis Club opens with “When The Drugs Kick In,” a humorous rock tune that starts, “I was right in the middle of a big idea/I forgot everything right then and there.” I love that the band responds with the title after each of those lines, giving the song a touch of a classic, happy pop tune, which is in delightful juxtaposition with what they’re saying. There are some really good lines in this song, like “Now I’m an uncast vote in a fixed election” and “I’m a part time lover, a full time ghost.” Nice, right? This is one of my favorites from this release.

“Chicks, Man!” is a fun tune with a steady beat and some interesting, amusing lyrics including the exclamation of “Chicks, man!” delivered almost like an oath, kind of like a summing of the situation with a simple (somewhat dismissive) statement. The lyrics come at you as from someone working things out as he goes. Like in these lines: “Now, everything is nothing, and, nothing ain’t worth shit/Hey, I could do the math too, I figured it’s time to quit/So I looked in the mirror, but there was no one there/Division and subtraction, I was cut in half/Or maybe a third – or half.” It’s that addition of “or half” that makes me love those lines. And check out these: “Hey, I forgot to tell the story/Yeah, we fell in love and lust/Blah blah blah, it was great, blah blah blah it sucked.” Here it’s the “blah blah blah” that really wins me over. I love this song.

“Me And The Lord Blues” is a great rock tune that immediately gets its hooks into you. Man, I love the guitar on this track – it really drives the tune, though at times it seems to overpower the vocals. Check out that short lead section. This is the kind of song you want to see the band perform at some outdoor venue in summer.

The band follows “Me And The Lord” with a sweeter, soft tune titled “Letter (Unmailed).” This is a love song from a man to his beloved, with promises and protestations of love and loyalty, such as “I would swim a raging sea/If you were in some foreign land” and “I’ll stand by you when you’re tall and strong, weak and uninspired.”

“Damaged” is a very catchy country rock number, in which they sing, “We’re damaged, damaged/Let’s fall in love.” That’s a great, funny, and terribly honest line. It’s a love song for those of us who are a bit older, and have been hurt by experience. You can’t help but love this tune. “We’re damaged, baby, ain’t that great/Damaged, by the time we’re born, it’s already too late.” And here is another example of their sense of humor: “We can get married, settle down, have a kid/And do the same great job our folks did.”  There is some really good stuff on lead guitar too, and then a nice section by Rob Arthur joining the band on piano. This is another of this album’s highlights.

Elvis Club is scheduled to be released May 14, 2013 on Lakeside Lounge Records, GB Music through RED Distribution.
Posted by Michael Doherty at 5:04 PM