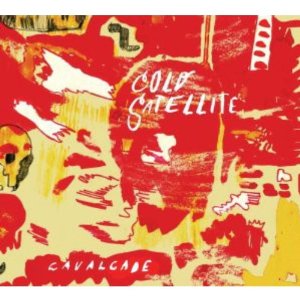 Cavalcade is the second Cold Satellite album; that is, the second album which teams up guitarist and vocalist Jeffrey Foucault and lyricist Lisa Olstein. All songs were written by the two of them, though not while in the same room. Lisa, who has won the Copper Canyon Press Hayden Carruth Award for her first book of poetry, writes the lyrics, and Jeffrey sets them to music, often swapping or eliminating verses as he sees fit. It’s an interesting way to collaborate, and as you might guess, this CD features some excellent lyrics. I love these lines from the end of “Glass Hands,” for example: “Tell me where you’ll go/When you walk out of here/I think I’m going to want to know/When the wind blows in from there.”  Many of the lyrics of Cavalcade truly are poetry. Check out these lines from “Every Boy, Every Blood”: “The clouds looked like swimmers/Dragging their arms across the sky.” Excellent, right?

Of course the lyrics are only half the story. Jeffrey Foucault really sells them with some excellent vocal performances, particularly on songs like “Careless Flame” and “Tangled Lullaby,” two very different songs, and thus two very different approaches to the vocals. The album has some rock songs, and some songs that are more in a folk or country vein. To my ear, the latter are generally more successful, and more interesting.

The album opens with “Elegy (In A Distant Room),” a song that comes on strong, like a burst of guitars, like a force already in full swing. And it remains steady, like that, without much in the way of nuance or variation, except for the lead guitar part playing over the buzz of the other guitar. But I dig the way his vocals rise above the fray, demonstrating a power, even a need. Especially at the end, when he repeats, “In a distant room/You are always dying.”

“Necessary Monsters” has that kind of cool easy southern rock groove, kind of like early ZZ Top, particularly in the guitar. The guitar, when it takes its lead, has a few specific things to say, and allows itself pauses between, which is nice. I also like the keys, which remain somewhat in the background. And when the song fades out, it feels like it’s moving away off into the distance rather than ending. Like the party is continuing elsewhere, and you could follow it if you so choose.

“Cavalcade,” the CD’s title track, has more of a country folk feel that I totally dig. In this one, Jeffrey Foucault sings, “Before the revolution/There was a queen/But I can’t remember her name/I have read the classics/Minus one or two.” I’m totally into this song, and even more when the lyrics surprise me: “You could light a fire to my bed/You could leave the hungry all unfed/What I meant by what I said/Is please please stay.” I absolutely love that. Isn’t that what we’re often saying, regardless of what words are coming out? Please please stay.

“Careless Flame” has a slower groove and a wonderful sadness as he sings lines like, “And all my bags were packed/My ticket was bought/We stayed up through the night/We made love then we fought.” The lyrics to this one are excellent. I’m particularly taken with these lines: “On some stranger’s tongue/Today I heard your name/And it flickered and went out/Like a careless flame.” That’s followed by a slow, gorgeous, sad instrumental section. This is one of my personal favorites. Sure, it’s a kind of cry-in-your-beer country song, but it’s the best of that – you know? Long after things are over, we’re still ending them, and so still living them.

I went to my first rock concert in 1982 when I was ten, and went to many more over the next decade. When folks wanted an encore, they didn’t just applaud. They lit their lighters. During slow songs too, audience members would flick on their lighters. When Aerosmith performed “Dream On,” or Bob Seger did “Turn The Page,” there was a field of small lights dancing above the audience like will-o’-the-wisps. It was beautiful. The first time I saw people use their cell phones in the same way, I thought I was going to be sick. The second time I felt a murderous rage rush through me, and then a heavy sadness. The first lines of “Bomblet” are “At the rock ‘n’ roll show/We hold up our phones/We thought we were taking pictures/But the phones are our candles.” It’s interesting to me that the singer includes himself, as it’s “We hold up our phones,” rather than separating himself from those that are doing it. Also interesting is that this song has a slow powerful groove, one that might have caused folks back in the day to ignite their lighters, especially during the guitar solo after the lines “And sometimes for days/All we want to do is sleep/Sometimes for days.”

“Tangled Lullaby” is a rock song with kind of a blues aspect to the vocals. This is really an excellent vocal performance, the lyrics mostly separated from the music, the band coming in hard at the end of each verse. It’s an interesting way to do it, as it forces you to focus on the lyrics, and then to move with the guitar when it comes rushing in.

Cavalcade is scheduled to be released on May 21, 2013 on Signature Sounds.
Posted by Michael Doherty at 1:14 PM