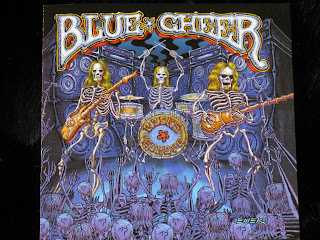 When I was in junior high and high school, pop music had gone all to hell (this was the late 1980s). So I was buying mostly late 1960s and early 1970s albums and compilations. On one of the compilations was Blue Cheer’s rendition of “Summertime Blues.” And it blew me away. I listened to it a lot, always with the volume way up. I heard some other early stuff from Blue Cheer, but then kind of lost track of them.

Rocks Europe is a two-disc live album capturing a show they did in Germany on April 11, 2008. For this show, they focused on three albums: Vincebus Eruptum (1968), Outsideinside (1968) and What Doesn’t Kill You... (2007). This is pure, unabashed heavy rock, with lots of bass, lots of guitar solos (and no keyboards or backing vocals to lighten things up). I have to admit, this kind of music is usually not what I listen to these days. It’s a bit much. But this album represents the end of a band that got me through some times in my early teen years, and it’s kind of cool to revisit it. Vocalist and bass player Dickie Peterson died in October the year after this concert.

There is some stage banter, some short introductions to the songs. The band greets the crowd, saying “We are Blue Cheer, and this is what we do.” And then immediately they go into “Babylon,” a hard rock song from their second album, Outsideinside. This has kind of a slow groove, and a cool lead guitar section.

“Parchman Farm” (written by Mose Allison) is from their debut record. It’s straight-ahead heavy rock and roll. Then a few minutes in, it becomes quiet, the guitar trailing off, before the bass and drums take over, with a loud pounding rhythm.

“I’m Gonna Get To You” is a song from the band’s 2007 album, What Doesn’t Kill You. This one also has a slow, heavy groove. Dickie doesn’t sing so much as roar, and I have to wonder how his vocal cords could stand it. His voice is so rough, it sounds like a struggle at times – but perhaps that’s just how it always was.

They follow that with another track from that CD, “Rollin’ Dem Bones,” and this one has a quicker tempo, and so is more fun. “You bring your stash/I’ll bring my own/You bring your bong/I’ll keep on rollin’ dem bones.” It’s funny, but I don’t think of this kind of music as pot-smoking music. On “Out Of Focus,” they sing, “Won’t somebody tell me what went wrong with me?” I know the feeling at times. This track has one of those protracted rock endings.

But of course, “Summertime Blues” is the song everyone gets excited about. In that song’s intro, they say, “There’s three of us on the stage. But we’re actually a four-piece band. And that fourth piece is you people.” And, yeah, they still rock this tune, and they still leave out the congressman’s line, replacing it with that cool guitar lick. This version is approximately seven minutes long, but that’s mainly due to its ridiculously long ending.

As long as some of these tracks on the first disc are, they’re nothing compared with the twenty-six-minute version of “Doctor Please” that kicks off the second disc. There is a long jam, with a pretty good groove, the focus of course being on the guitar. And I have to admit, the guitar work is impressive, and I definitely got lost in this groove and caught up in some of the guitar gymnastics. Approximately ten minutes into the track, there is a drum solo – but the change into that solo is abrupt, rather than flowing from the main body of the song. The drum solo (four minutes or so), has  a few different sections, the most impressive for me being when he keeps the cool bit going on the snare, while adding a rolling rhythm on the toms.

The show ends with a cover of Albert King’s “The Hunter,” Blue Cheer giving the song a heavy bluesy groove. There are two more tracks, studio tracks, to round out the second disc: “Alligator Boots” and “She’s Something Else.” "She's Something Else" is a fun song.

Rocks Europe is scheduled to be released on Rainman Records on May 28, 2013.

Posted by Michael Doherty at 2:16 PM