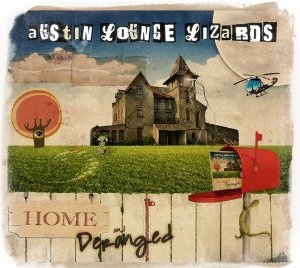 Austin Lounge Lizards are a comedy folk group. They formed in 1980.  Their new CD, Home And Deranged, is the group’s first new studio album since 2006 (and their eleventh album overall).  The band’s lineup features founding members Hank Card and Conrad Deisler. The third founding member, Tom Pittman, left in 2011, and so this is the first record since his departure. Darcie Deaville joined in 2008, and Bruce Jones joined in 2009. All four members contribute songs to this release.

Targets of these tracks include the government (including TSA), egotistical performers, and conspiracy theorists. These songs, however, are quite tame, and certainly won’t offend anyone. A few of these tunes are about relationships, like “If I Saw You All The Time,” which has the great line “When you return, to your dismay, you discover I’m still there.”  Some of these songs work better than others. My favorites are “I Lied,” “Thank You For Touching Me There” and “Would You Like To Start A Band?”

Home And Deranged opens with “Enough About Me.” This one takes that old joke – “I’m tired of talking about myself/What do you think of me?” – and turns it to be about a singer on stage. So it plays on the ego of a musician. However, it’s one of the weaker tracks, to my ear.

The first track on this album that really wins me over is “I Lied.” This song has some really good lyrics, and is truly funny. In the opening verse, he sings, “How I stood at the altar, with my brushing bride/And I lied/And I lied/And I lied.” There is something delicious about a groom knowing the vows are all lies, and saying them anyway. He then almost puts the blame on the wife, with the line “I guess marriage was more than she bargained for.” (The only thing I wish is that he didn’t hit the word “ex” so pointedly in the line, “I went to look for my future ‘Ex,’” for he’s selling the joke rather than just letting it play.)  “I Lied” was written by Bruce Jones.

“Thank You For Touching Me There” has an introduction, which is presented as a separate track. Darcie says, “We’d like to dedicate this song to the Transportation Security Administration.” Then it goes straight into the song, and right away Darcie sings, “Thank you for touching me there/Thank you for touching me where/I felt things of which I had not been aware.” I definitely dig this one, especially as I despise all the ridiculous security measures at airports. The song is presented as a duet, which is a nice choice, with both Darcie and Hank providing lead vocals, making it a strange sort of love song. They sing, “Thanks for invading my personal space.”  “Thank You For Touching Me There” was written by Conrad Deisler and Hank Card, and is my favorite track on the album.

“Black Helicopters” is a song about conspiracies with a healthful dose of paranoia. It’s essentially a list song. It’s not bad, though the line “Why, oh why, did Lady Di? Because it was her name” hits with a thud. By the way, “9-11 was an inside job” strikes me as likely the truth, not just a line. For some conspiracies, as they sing in this song, “They’re in your mind, but also true.” Indeed.

“Dumb Dumb Dumb” is a list song, listing dumb things the narrator has done, such as “I parked my car in a ‘no-no’ zone.” Its punchline is “Two times I voted Republican” and it ends right there. The pay-off isn’t great enough for that to be the climactic line. That line should be halfway through, and the song should build to something else, something surprising.

“Who Needs You?” is a sort of relationship song with a great energy and some excellent stuff on fiddle by Darcie Deaville, who also wrote the song. This is a seriously fun tune.

Home And Deranged ends with “Would You Like To Start A Band,” a hypothetical tale of a musical group told from the perspective of someone who hasn’t started a band, but would like to. He has the entire thing mapped out, including the band’s break-up and members’ solo projects. Before that, he sings, “Make a lot of You Tube videos for our families to see.” I dig that moment of honesty, his acknowledgment that it would only be family members who’d watch them. This one really works, and I like the whistling section. Plus, I appreciate this line: “But we’re proud we never sold our souls to EMI.” “Would You Like To Start A Band?” was written by Bruce Jones.

Home And Deranged is scheduled to be released on May 7, 2013 on Blue Corn Music.

Posted by Michael Doherty at 2:51 PM