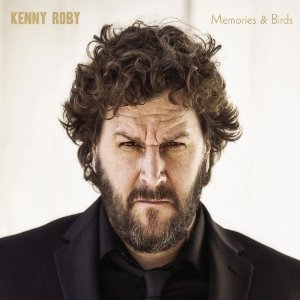 Kenny Roby’s new CD, Memories & Birds, his first in six years, is an album that immediately got to me. It features mostly slow, thoughtful songs with distinct characters. This is an album to listen to when you’re alone, as you need to be able to sink into it, to pay attention to the lyrics, and let your mind go with the stories these songs tell. I’ve listened to it several times, and it seems most effective late at night (though listening to it during the day almost gives you the feeling that it is late at night).

These songs feature lots of interesting and striking lyrics, like “I ain’t the worst man you’ve ever known/But I’d be willin’ to make a bet/That every devil here ain’t born full grown/And we ain’t met all of ‘em yet” from “Colorado.” And the line, “And fever that won’t break you” from “A Short Mile.” All of the songs on Memories & Birds were written by Kenny Roby.

The album opens with “Memories & Birds,” the title track, which is a nice, slow, pretty tune. And I love the presence of strings (I have such a weakness for cello). Kenny Roby’s vocal performance has a relaxed feel. It’s a simple, direct address, almost like thinking aloud. Though the song addresses another person in lines like, “I think of you all the time/Almost every day,” it feels like the song is really to himself in a way.  I love these lines: “If you really wanted you could crush me with a word/Then there would be only me with memories and birds.”

“The Monster” has a more playful feel.  I love the first line, “I don’t expect much from you, Jenny.” In short stories and novels, the opening line is often charged with grabbing the reader. This song’s opening line works in the same way. And that’s before you think of narrator as a child (“Well I got this key from my Uncle Pete/To a secret door by the oak tree”).

“The Craziest Kid Around” makes interesting use of childlike, angelic backing vocals. And this one too is a look back to childhood; there is a sort of innocence. He overhears and sees things that he doesn’t quite understand, so the story we receive is more than he perceives, which is interesting. Like in the lines, “I saw both them out the kiss tree/Didn’t look like kissin’ to me” and “Heard my uncle down in town one day/Say ‘It’s just unnatural’/And I don’t understand all that the people say/So I’m just gonna play it cool.”

“Tired Of Being In Love” has more of a pop feel, and its chorus fits with that more usual feel: “Oh, I’m tired of bein’ in love/It hurts too much/When the one you love ain’t in love with you.” Yet this song is still unusual, with its female protagonist hopefully using the baby as a way of keeping the man present. I love the flutter of horns at the end.

“A Short Mile” is a wonderfully sad song in which the singer offers the acknowledgment of shortcomings, but is unable to do anything about them. We’re caught in our own circumstances, and often another is caught in ours too, and we harm him or her without intention. He sings, “I know I’m breaking you/I can see it in your smile/I’m the wrong man to ride a short mile.” This is a fantastic song, one of my favorites from this release.

“Me And The Monkey” is an interesting song. It’s strangely sparse, an odd song of regret. “How am I supposed to live/Without you’re here in my mind.”

Memories & Birds is scheduled to be released on April 2, 2013 on Little Criminal Records.
Posted by Michael Doherty at 2:31 PM