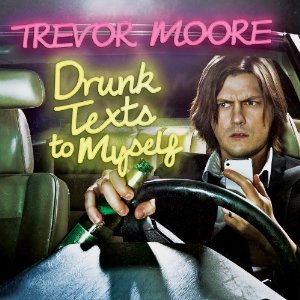 Trevor Moore’s debut album, Drunk Texts To Myself, is a collection of mostly very funny songs. The songs are presented in a variety of musical genres, including pop, rap, heavy metal and even spoken word. My favorites are “Maybe It’s Because,” “Tom Hanks Is An Asshole” and “God Hates The Tips.” The weaker tracks are all at the end of the album (basically the final three tunes). All of these songs were written by Trevor Moore, though he gets help on the vocals from a series of guest vocalists.

Drunk Texts To Myself begins with a short spoken word introduction to “Founding Fathers Rap” in which a teacher asks her students their favorite things about the founding fathers. The song itself is a rap about what the founding fathers were really all about: hemp.  It starts with George Washington getting high. Then Jefferson sings, “The Declaration of Independence I wrote so high I’m surprised it makes sense.” Abe Lincoln is present in this song too, also getting stoned. (Of course he’s not a founding father, but that’s okay.) My favorite line, however, is “Ben Franklin got so high he forgot to be president.”

“Tom Hanks Is An Asshole” is presented as spoken word, a great choice, for it actually gives it a serious tone, almost like from a documentary or news broadcast (at least at first). It begins, “In 1994 Tom Hanks once pretended to be mentally handicapped for six straight weeks. He even filmed it, and then submitted it to the Academy Awards. Then, after he won an Oscar, he called the Down Syndromed actor who played Corky on the TV show Life Goes On and said, ‘Now who’s retarded?’ Then he said ‘You are,’ and he hung up on him.” I love this one, not because I think Tom Hanks is an asshole (I’ve never met him), but because I truly hate many of his films (such as Forrest Gump, Cast Away, The Terminal, Saving Private Ryan, Sleepless In Seattle, and The Bonfire Of The Vanities). The bit about Heath Ledger made me laugh so loudly I think I might have alarmed my neighbors.

“Maybe It’s Because” is an acoustic tune, a sort of love song about a problematic relationship. The woman is just not responding the way the singer hopes.  This is one of the CD’s best tracks. It’s wonderful. I totally love it, and I feel for the guy, even as I hear the woman’s screams in the background. We all need love, baby.

“The Pope Rap (Modern Day Profit)” is a rap about how the pope (and thus, by extension, religion itself) is all about making money, sung from the perspective of his holiness himself. Anyone who has seen pictures of The Vatican can’t help but be impressed by the absolutely disgusting display of wealth, and will appreciate this song. There is a break in the song, when the pope talks with a girl who is crying because grandmother has just died. He tells her, “You know it would be a shame if someone were to stick her in a place where she just burned and burned forever. You don’t want that, do you?” But of course he requires a significant donation. Isn’t it about time that churches were taxed?

“Drunk Texts To Myself,” the CD’s title track, is a series of text messages that he is reading the next morning, having no memory of sending them. Each text is done as spoken word, but is partially repeated by backing vocalists, who also sometimes comment on the text, adding to it. And that stuff is my favorite bits about this track. Here are a few examples of his drunk texts: “Black people are the second worst at being president,” “Write a dinosaur children’s Christmas book – the last line should be ‘Because it had never snowed in Dinosaur Land before’” and “Try to get the rights to Space Jam.”

“God Hates The Tips” begins as an a cappella gospel song, then kicks in like Queen’s “Fat Bottomed Girls.” This is the only song about circumcision that I’m aware of. “God hates the tips of little babies’ dicks.” This is just great, great, great.  I found myself singing along to this one. Probably my favorite lines are “A few then went and raised objections/Saying they didn’t see the connection/But he said I’m God so none of this needs to make sense.” There are some other lines that are wild, but I don’t want to spoil their impact by quoting them here.

“Help Me” is a pop song from the perspective of a child performer who was sold by its parents to a producer in the music industry. “He makes me do things that I don’t want to do/Please call child services or maybe SVU.” The producer, at one point, interrupts the song, rapping about how this is just one of the child’s practical joke. That’s my favorite part, with the child in the background crying for help and saying “Don’t let him put me in the box.”

The last three tracks aren’t as good. “What About Mouthwash?” is a song about not being able to buy alcohol, so turning to possible alternatives. “My Mom’s A Bitch” is a heavy metal song about a boy who is annoyed with his mother. It’s not that funny, and of course the music is annoying. “Time For Guillotines” is a song about putting aside our differences and coming together to get the country back in shape by executing a lot of people.


Drunk Texts To Myself was released on March 26, 2013 on Comedy Central Records.

(Note: I also posted this review on Pop Culture Beast.)

Posted by Michael Doherty at 4:34 PM