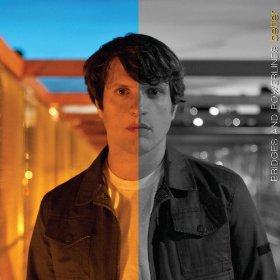 Bridges And Powerlines is a pop band based in New York. They released their first, self-titled, EP in 2006, and since then have put out a couple of full-length CDs. Their new EP, Better, contains all original songs, with all four band members sharing writing credits. Usually CDs order their songs so that the strongest tracks are first. Not so here. This EP, for the most part, actually gets better as it goes along (with my favorites being the third, fourth and sixth tracks). The common thread seems to a hopeful attitude, with these songs having a positive stance on getting through the tough times. The songs on this EP are named after neighborhoods in Brooklyn.

Better opens with “Bushwick,” a decent power pop song, with rough male vocals mixed with sweeter backing vocals. This song has a great energy, and kind of a positive vibe with the eager, exuberant repetition of “We find a new way.”  It’s a song of getting through and moving on, with lines like “Don’t cry/We might see tomorrow if we try/We might be the ones who never die/Leave this space behind and go outside.”

“Park Slope” starts with its protagonist in a hospital bed, with the world at war. This one has a positive aspect too, as he sings, “Love tends my wounds.” And then, though he admits he’s broken, he sings, “When it’s over, we’ll see mountains/We’ll see forests when it’s over.”

It’s the third track, “Williamsburg,” that really gets me interested in this band. It’s a great song, partially because of its wonderful build. And it has these excellent catchy touches on keys. I just love the feel of this one. This is when pop is at its best. And then it’s not afraid of ditching that good comfortable groove for a bit, to go into a different section, with a stronger presence on drums. This song really draws me in.  “Why close my eyes, sleep the night away when I have you.”

As good as that song is, “East New York” is actually even better, and much more interesting. The vocals start at the fore, over a steady beat that slowly creeps up. The album’s title comes from this song’s opening lines: “Better/I’m doing better/I’m doing better/’Cause I’m not around/Braver with someone less clever/I read old letters to somebody else.”  This track has really nice vocals, both the lead and backing vocals. There is something of a sweet innocence to the feel of this song – “And I was young/And I was wrong.” The repetition of those lines seems as a way of letting go, as when you repeat something enough it tends to lose meaning. This is a wonderful song.


“Greenpoint” begins with drums before the vocals and other instruments come in. “We’ve gone and lost control/Now we’re just another set of separate souls/So come in, and take my shoulder/And release each other.” This becomes more of a rock song when the guitar takes over. It’s like the guitar is acting as a voice, telling another part of the tale, a brief part, for the guitar subsides again.

“Red Hook” features some interesting vocal work, particularly the play between lead and backing vocals near the beginning. This song is actually quite pretty at times. But it’s the keyboard work I love most – it’s nothing extravagant or ostentatious or anything – but the simple feel of it is quite effective.


Bridges And Powerlines are Andrew Wood, Keith Sigel, David Boyd and Mason Ingram. Joining them on this release are Rob Moose on violin, CJ Camerieri on trumpet and French horn, Clarice Jensen on cello, Kieran Kelly on percussion and backing vocals, Maine Sigel on backing vocals, and Vanessa Morales providing the radio voiceover.

Better is scheduled to be released on May 21, 2013 on Daisy Pistol Records.

(Note: I also posted this review on Pop Culture Beast.)
Posted by Michael Doherty at 10:38 AM