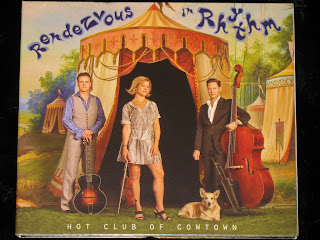 Hot Club Of Cowtown is a trio of amazing musicians – Elana James on fiddle and vocals, Whit Smith on guitar and vocals, and Jake Erwin on bass and backing vocals. Seriously, these guys can play. On their last release, What Makes Bob Holler, they did western swing songs made popular by Bob Wills and His Texas Playboys. On their new release, Rendezvous In Rhythm, they tackle some standards and some great jazz tunes. So clearly they can do anything, and do it extremely well.

Rendezvous In Rhythm is a collection of covers, great old tunes that sound completely fresh. Some feature male vocals, some female vocals, and some are instrumentals. On some tracks, particularly “Avalon” and “The Continental,” the fiddle and guitar work so well in conjunction at times, they’re like one instrument, one voice. Like a dance. (By the way, “Avalon” also has a cool bass solo.)

You’re likely familiar with a lot of the songs they’ve chosen for this album, like “I’m In The Mood For Love” and “Slow Boat To China.” Their rendition of the latter is playful and fun, particularly in the way Elana James approaches the vocals. That track also has some great work on guitar.

Rendezvous In Rhythm kicks off with “Dark Eyes/'Ochi Chornye,’” and right away I’m transported to an evening in a European city, where beauty resides around every corner and everyone is fluent in the language of the eyes. And everyone can dance. There is definitely romance here, but this song is also fun. It picks up its pace in a playful way. There is some incredibly impressive work by all three musicians, perhaps especially by Whit Smith on guitar. Though this is an instrumental track, you can hear a couple of random comments or exclamations toward the end. (Although that might just have been me shouting out in unabashed joy while listening.)

I’ve heard so many versions of “I’m In The Mood For Love” over the years, and it still makes me smile every time. This version by Hot Club Of Cowtown has fairly smooth vocals by Whit Smith, and a great groove on bass. But it’s the instrumental section I love most in this rendition.

Elana performs lead vocals on “Crazy Rhythm,” a fun and rather silly tune. This song features humorous lines like, “They say that when a highbrow meets a lowbrow walking along Broadway/Soon the highbrow he has no brow” and “What’s the use of prohibition?/You produce the same condition.” Later in the song, some of the lyrics are done almost like spoken word (“Why I feel like the Emperor Nero when Rome was a very hot town...”). There are some surprising backing vocals too, working briefly as another instrument. “Crazy Rhythm” boasts some wonderful work on fiddle.

“If I Had You” is such a beautiful song. Irving Berlin sure could write them, eh? Elana does the lead vocals on this one, singing those wonderful lines: “I could turn the grey skies to blue/If I had you/I could leave my old ways behind/Leave all my pals/I’d never mind/I could start my life anew/If I had you/I could cross a snow-capped mountain/Sail the mighty ocean wide/I could cross a burning desert/If I had you by my side.” This rendition has a sweet groove. The fiddle in the first solo follows the vocal line, then reaches other heights in the second part of the solo. It’s just wonderful. This song makes me feel so damn good.

Hot Club Of Cowtown tackle two instrumental tunes by one of the guitar masters, Django Reinhardt. The first, “Minor Swing,” was co-written by Stephane Grappelli. There is an exuberant joy in the group’s playing on this track, though a great deal of that I feel is inherent in the song itself. How could you not be happy playing a song like this? You can hear them vocally encouraging each other, cheering each other on. This is definitely one of the most impressive tracks on this disc. Each band member has a solo.

“I’m Confessin’” is an incredibly pretty instrumental with the fiddle acting as a gorgeous voice. This track has me falling in love with that fiddle. It’s like a beautiful, enchanting, eloquent woman. This song also has a slow, relaxed, wonderful groove on guitar.

Rendezvous In Rhythm concludes with its second Django Reinhardt tune, “Douce Ambiance.” This deliciously fun instrumental track was co-written by J. Larue. This song is magical, coquettish, and you just want to follow it wherever it may lead. It features excellent work by all three musicians. And yes, there’s a bass solo.


Rendezvous In Rhythm is scheduled to be released on May 28, 2013 on Gold Strike Records, through Proper Music Distribution.
Posted by Michael Doherty at 3:34 PM