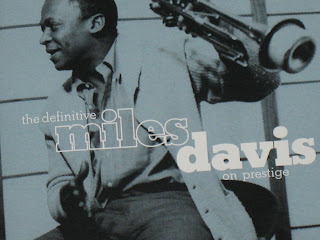 Miles Davis is one of the most famous jazz musicians, and there is a reason for that. Actually, there are many reasons for that. Twenty-four of them are contained on this two-disc release. Miles Davis was a man who was often re-inventing himself, and simultaneously reinventing music.

This two-disc set does not cover his entire career, just the years 1951 through 1956. But there was enough music for at least three careers in that short period when he recorded on Prestige.

Disc one goes mostly in the order in which the songs were recorded (not released). The two exceptions being the fourth track, "Four," which should actually be fifth, and the tenth track, which should be last.

It opens with "Morpheus," with some great drumming by Roy Haynes, and some nice work on piano by John Lewis, who also wrote the tune. This song is a nice little jam, with Sonny Rollins on tenor sax. "Morpheus" was originally included on Miles Davis And Horns (1955).

Art Blakey starts off "Four" on drums. This is a pretty song, which then goes into a great groove, particularly when Horace Silver takes the lead on piano. "Four" was written by Miles Davis, and was originally included on Blue Haze (1954).

"Compulsion" features Charlie Parker and Sonny Rollins, both on tenor sax. Yes, that's right: Charlie Parker is on tenor, not alto. This recording is from the last session Miles and Charlie did together. The wonderful tempo is kept by drummer Philly Joe Jones, who would be a key member of The Miles Davis Quintet (he plays on every track of the second disc). This track was originally released on Collectors' Items (1966). "Compulsion" was written by Miles Davis.

Horace Silver is such an amazing pianist. "I'll Remember April" provides a great example of his playing. Percy Heath is also excellent on bass. There is a section of the track that will have your toes tapping wildly, joyfully. Written by Gene DePaul, Patricia Johnston and Don Raye, this song has been recorded by Judy Garland, Bobby Darin and Doris Day. This version by Miles Davis was originally released on Blue Haze (1954). It's one of the highlights on the first disc.

"Walkin'" is the definition of "cool," with its great slow groove, and the seeming ease and joy with which it's played. A phenomenal tune, written by Richard Carpenter. It's got a great mood, with some beautiful, flawless solos that work well within the overall structure, rather than seeming like departures from it. It's also the longest track on this release. It was the title track from the 1954 release by Miles Davis All Stars.

"Bags' Groove" was written by Milt Jackson, who plays vibraphone on this track. This one also features Thelonious Monk on piano; he does a wonderful - at times sparse - solo. And Miles matches it and adds to it before the song returns to its cool groove for the end.

The first CD concludes with a fast, blowing version of "Will You Still Be Mine," written by Tom Adair and Matt Dennis.

The second disc contains selections from The Miles Davis Quintet, all recorded in 1956, with the exception of the first track, which was recorded in 1955.

This disc opens with "There Is No Greater Love," a mellow, late-night tune with a steady beat of brushes on the snare, and some wonderful work by Red Garland on piano. Miles' trumpet is like a lonely voice in the night.

There is a great version of Surrey With The Fringe On Top," a song by Oscar Hammerstein and Richard Rodgers for Oklahoma! (1943). This disc also contains three Lorenz Hart and Richard Rodgers tunes: "It Never Entered My Mind" (from Higher And Higher) "I Could Write A Book" (from Pal Joey) and "My Funny Valentine" (from Babes In Arms). Paul Chambers really shines on "I Could Write A Book," taking the tune up and down with abandon and joy and ease.

Insane quick blasts begin "Salt Peanuts," a fast-paced jazz gem written by Kenny Clarke and Dizzy Gillespie. Red Garland is playing like a twenty-fingered freak on this one. And Miles is just phenomenal. John Coltrane bursts in like a whirlwind storm. And then there is a cool and lengthy drum solo by Philly Joe Jones, in which he sticks mostly to the snare. Fun.

On "Oleo," Paul Chambers again is playing with mad precision, with Miles Davis and John Coltrane blowing smoothly over the rhythm - the results sounding like a wild, intricate dance. This is a great track. "Oleo" was written by Sonny Rollins.

Also included on the second disc are two Miles Davis original compositions: "Tune-Up" and "The Theme." "Tune-Up" is great fun, with Miles blowing up a storm, and some fantastic moments on drums. "The Theme" was often played as the closing number of the band's live sets, and thus it closes out this collection.

For those interested, a cover of "The Theme" was included as a bonus track on the 2011 re-issue of Art Blakey's Jazz Messengers' Ugetsu.

The Quintet was Miles Davis on trumpet, John Coltraine on tenor saxophone, Red Garland on piano, Paul Chambers on bass and Philly Joe Jones on drums.


After his years with Prestige, Miles Davis signed with Columbia, and released such albums as Miles Ahead and Kind Of Blue in the late 1950s.

This two-disc set includes new liner notes by Ashley Kahn, who wrote Kind Of Blue: The Making Of The Miles Davis Masterpiece. The liner notes include photos of the covers of the albums from which these tracks are taken, plus two other great photos of Miles Davis.
Posted by Michael Doherty at 4:01 PM