The String Cheese Incident: "Rhythm Of The Road Volume One" 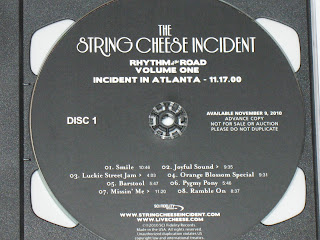 This three-disc CD contains the entire concert that The String Cheese Incident performed in Atlanta on November 17, 2000.

Rhythm Of The Road Volume One: Incident In Atlanta - 11-17-00 is the first in a new archival series of live concert recordings from The String Cheese Incident. However, this is not the first set of such recordings. Several years ago, The String Cheese Incident released a series of CDs titled On The Road, which also featured entire concerts by the band.

The String Cheese Incident formed in 1993 in Colorado. By the time of this recording, the band was well established, having released five albums, including one with Keller Williams. Its fan base was growing, and the band was just starting to play larger venues. The show captured on this release was at The Tabernacle in Atlanta, Georgia - a venue that has a capacity of 3500.

The first CD contains the entire first set, including an incredible rendition of "Orange Blossom Special."

The album opens with "Smile," a fun, light, bright tune. It's a song from the perspective of a guy on the road, singing to his woman at home - not a rare topic for a touring band. But this is a sweet song, with some nice work on keys and some great fiddle at the end.

There isn't long to wait for some great jamming on this release. If the wonderful end to the first track wasn't enough, or only whetted the appetite, "Joyful Sound," the second track, starts a nice series of tunes with plenty of jamming.

"Joyful Sound" begins with a good groove on drums. At the lines "Raise my voice to the heavens/Make a joyful sound" the audience takes its cue, and makes its own joyful noise in response.

There are moments in this song - like about three minutes in - that are almost Zappa-like. And near the end the guitar definitely has a Trey Anastasio quality.

Tony Furtado joins the band on banjo at the beginning of "Luckie Street Jam," which comes right out of "Joyful Sound." Tony Furtado has released more than a dozen albums of his own, and has also played with Alison Krauss, Leftover Salmon and Little Feat, among others. He's an incredibly talented banjo player.

"Luckie Street Jam" leads right into an amazing rendition of "Orange Blossom Special." Most music fans have heard dozens of bands cover this song over the years. But the version on this disc may be the best ever. It's manic, wild, joyous, fun, beautiful - just a bloody good romp. With no skimping on the jam either, at more than nine minutes. Ah, listen to that fiddle. And Tony Furtado is seriously amazing on the banjo.

The song slows down for a moment seven minutes in, then builds again like a train ripped off it's rails and barreling through the stratosphere. Holy moly!

"Pygmy Pony" is an instrumental track with a lounge-type jazzy feel, but with an island rhythm.
"Missin' Me" has a sort of New Orleans flavor to it. And during the jam, approximately seven minutes into the song, they do a little Allmann Brothers "Jessica" tease.

Led Zeppelin Cover
The first disc ends with a cover of "Ramble On." Yes, the Led Zeppelin tune - one of the many Led Zeppelin songs inspired by The Lord Of The Rings books. And it's a good version too. At the end of that song, they say they're going to take a break. And, as they did at the top of the show, they say, "What's up, Hotlanta?" which is obnoxious.

The first track of the second disc is the band talking to the audience, particularly the folks in the balcony, getting certain sections up there to cheer. Thus, a "group hoot." And then the second set actually gets going with "Outside And Inside," a fun song with a good groove that doesn't let up.

"Impressions" is an instrumental track with a cool rhythm. The song takes on a jazzy tone four minutes in, with nice work on keyboards. That's when the tune really starts to take off. Then approximately eight minutes in, it slows down, sounding more introspective and exploratory. Until the percussion starts to build under the spacey guitars, demanding the song to take on a more cohesive structure once again.

That leads directly into "Glory Chords Jam," another instrumental track.

"Midnight Moonlight"
The jam leads easily and wonderfully into a great rendition of "Midnight Moonlight." This is a wonderful bluegrass song written by Peter Rowan. This rendition has the right spirit and energy. And it benefits from the return of Tony Furtado on banjo.

There is a nice jam with each musician taking turns at lead. There is also a great bass line. The song just gathers momentum and energy, and when it seems about to explode it suddenly slows again, leading back to the next verse.

"Miss Brown's Teahouse"
The second disc ends with "Miss Brown's Teahouse," which has a fun dance rhythm. When the band sings, "The music is thumping and the people start jumping," the crowd cheers. You can almost hear them dancing. This song also features some wonderful work on guitar.

The third disc opens with "Wake Up," a more serious song, particularly in the lyrics, with references to death in lines like "If it catches up with me, it's gonna kill me by degrees" and "The bottle is your graveyard." Though there is still some great jamming, it has less of a playful quality. This song was from the band's second album.

Tony Furtado joins the band again on banjo for "Black Clouds," the final song of the second set. Tony is wonderful, as always. This song features some really nice work on guitar, particularly in the instrumental sections of the song. The song slows down a few minutes in, and takes on a pretty tone. But it picks up the pace again several minutes later, with a great jam that includes a "Casey Jones" tease.

"Black Clouds" was included on the band's first album, Born On The Wrong Planet.

The encore starts with a couple of bluegrass tunes, taking advantage of Tony Furtado's presence. The first is "The Old Home Place," which was written by Dean Webb and Mitch Jayne. The vocals in this rendition sound perfect.

The second is "Shenandoah Breakdown," a wonderful instrumental song written by Bill Monroe. This is what it's all about, when the music is pure joy.

Michael Travis and Kyle Hollingsworth don't play on either of these two tracks. But they do rejoin the band for the final song of the night, "Shakin' The Tree," a Peter Gabriel song. Tony Furtado plays guitar on this one. And there is a great blending of the voices.

By the way, the title of this series of recordings, Rhythm Of The Road, comes from a song of the name, written by Bill Nershi and included on the band's second album.

The String Cheese Incident is Kyle Hollingsworth on keyboards and accordion and vocals; Michael Kang on mandolin, violin and vocals; Keith Moseley on bass and vocals; Bill Nershi on guitar and vocals; and Michael Travis on drums and vocals.