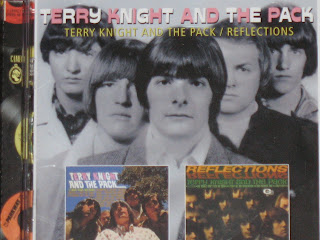 This 2010 release contains both complete albums that Terry Knight And The Pack put out in 1966 and 1967.

Terry Knight was born Richard Terrance Knapp. He grew up in Michigan, and became a radio DJ, taking on the name Terry Knight because he had a late-night shift. He later quit radio to pursue his own musical career. Joining him were Curt Johnson on guitar, Bob Caldwell on organ, Don Brewer on drums and Mark Farner on bass (and later on guitar).

The CD starts with "Numbers," which is a good 1960s garage band type song, with some cool guitar work. "What's On Your Mind" sounds like the music that was coming out of San Francisco in 1965 - 1966, especially in its keyboard work and the refrain. It even features a kazoo. It's a really nice song, but it's very short.

"Where Do You Go" is a song written by Sonny Bono and originally performed by Cher. It features some nice church bells.

"You're A Better Man Than I" is really a product of its time, with its references to hair length and clothing in the lyrics. It was written by Brian Hugg and Michael Hugg, and was also done by The Yardbirds.

"Lovin' Kind" is a rock song with a folk edge, along the lines of some of the music by The Byrds, The Band and The Monkees (and even The Mamas & The Papas). It's one of the best songs on this CD, with some nice vocals and a sweet bit of harmonica at the end.

With "Got Love" it seems the band is trying to sound a bit like The Animals. The drumbeat at times is similar to a Bo Diddley beat. The instrumental end of this song is more interesting than the lyrics.

"A Change On The Way"

"A Change On The Way" is another song that's fixed securely in its time. Especially with these lyrics: "If the books of a nation burn/In the fires of a nation that won't learn/If you think you've already been told/That you'll never live to grow old/If you play their game, but never win/And you feel like you've got to give in/Don't believe it." And the song promises "a change on the way."

"Lady Jane" is the first of two Rolling Stones covers. On this one, the band is pretty faithful to the original.

The bass line to "Sleep Talkin'" is simple and wonderful. This is a really cool mid-1960s gem, with some excellent and interesting vocal work, plus some nice, somewhat distant harmonica. The song ends abruptly - it could have gone a bit longer, for it's one of the best on this release.

"I (Who Have Nothing)" is the only sort of hit for Terry Knight And The Pack. It reached #46 on the Billboard chart. It was written by Jerry Leiber, Mike Stoller, Carlo Donida and Giulio Mogol Rapetti, and was recorded and made famous by Ben E. King in 1963.

The band's second album, Reflections, starts with "One Monkey Don't Stop No Show." This song is a bit fuller and more whimsical than the music on the first album. This song was written by Joe Tex.

"Come With Me" is a pretty song with folk elements.

"Got To Find My Baby" has a sort of country feel to it, but also has some interesting changes. It sounds a bit like Country Joe & The Fish in its pacing. A cool song.

"Dimestore Debutante" is a song trying desperately to sound like Bob Dylan's "Like A Rolling Stone." It's hard to take this song seriously on its own merit. But that line, "You're a ten cent dimestore ring that I bought for a nickel" is funny. It's also the longest song on the album.

In "Dirty Lady," Terry Knight is trying hard to sound just like Donovan. It's weird. Throughout this album, his influences are beyond obvious, but the music still, by and large, works well. Though one wishes he could settle on an identity and go with it. The music for this song is interesting and wonderful.

"Love Goddess Of The Sunset Strip"

"Love Goddess Of The Sunset Strip" is a goofy little rock number that is actually pretty amusing. But "Forever And A Day" is probably the oddest tune on this CD. It's about a man hiding up in a tree who is proud of being above everyone.

The CD ends with its second Rolling Stones cover, "(I Can't Get No) Satisfaction." This is actually a seriously interesting version of this song - more so than the Stones' original (or maybe it only seems that way because the Stones song has been played to death over the years).

This CD is part of the new series of Cameo-Parkway releases, put out by ABKCO in conjunction with Collectors' Choice Music. It's due to be released June 22, 2010.