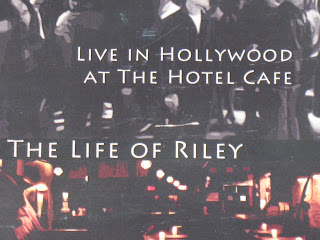 The music on Live In Hollywood At The Hotel Cafe has a more raw and intimate feel than on the studio releases. The songs are all strong, and have a sort of direct, earnest power, particularly in the vocals.

The quality of the recording is excellent, though it doesn't seem to be a soundboard recording, because there is a lot of crowd noise in the background at times. Yet the vocals and instruments are all quite clear.

The album opens with "By The Way," which features a good groove, with catchy elements, like the "doo doo-doo-doo" vocals. It's a good solid song to lead off the album, with the repeated line, "I want to take you away tonight." It also features some nice work by Henri O'Connor on lead guitar. (The first track also includes the band's introduction by the venue's MC.)

"Vancouver"
At the beginning of the second track, an audience member shouts out something. Riley responds, "I have no idea what you just said." He then introduces "Vancouver" as the first song he ever wrote. It's an excellent song about a man who is unsure of how he got where he is, but who now wants to stay.

Riley's voice has just the right mixture of youth and wisdom, of hope and experience, to make a song like this work.

Riley introduces "Forget About Me" by saying, "This is the first song that Henri and I ever wrote together, when we formed the band." He tells the story of a girl who inadvertently gave him the title of the song, and how the band was formed.

This song was also included on the band's self-titled album. It contains the great line, "Yeah, this whiskey is my voice," and the refrain, "Tonight I want to forget about me." It's a sad and pretty tune. This version is excellent, with some nice guitar work, and a great little jam toward the end (which the crowd really responds to) before it settles down to just the acoustic guitar and then the refrain once more. During that, the audience is absolutely silent, clearly engrossed in the performance. What better compliment to a group or songwriter?

As they start "New York, New York," Riley says, "Let's have a few drinks and have fun." And yes, this is one upbeat, fun tune - a song to get the crowd dancing. The song breaks down in the middle to just drums and bass, during which Riley introduces the band. It's a nice moment.

"Bang, Bang"
"Bang, Bang" is the sweetest and prettiest song on the album. It starts, "And I love to feel you shaking/Your head upon my chest." It also features nice backing vocals. The song ends with Riley singing the last few lines acappella: "And you're wearing my old T-shirt/And oh you wear it well/Bang, bang."

"Long Way Home" is the title track from the band's 2009 EP. Their voices blend together incredibly well on this song.

The Life Of Riley concludes their set and this CD with "Trouble," the opening track from the band's self-titled album. It's a fun song, and it's clear from the sound that the crowd is seriously into it.

Riley Smith will be familiar to movie fans as well as music fans. He starred in 2007's White Air and also had roles in Eight Legged Freaks (2002) and Radio (2003), as well as many other films and television shows.

Live In Hollywood At The Hotel Cafe is available now through The Life Of Riley website. It will be available on iTunes at the end of September.