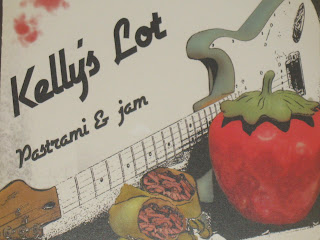 Kelly's Lot's 2009 release features several excellent cover songs, such as Bonnie Raitt's "Give It Up Or Let Me Go," as well as original material.

Kelly Zirbes, lead singer of Kelly's Lot, has one of those strong, kick-ass female rock voices. It's a pleasure - even a thrill - to hear her belt out some of these numbers.

There are several cover songs on this album. Kelly interestingly chooses female vocalists to cover that she's most likely been compared to at one time or another - Bonnie Raitt, Melissa Etheridge, Janis Joplin.

Kelly's Lot opens this CD with an excellent cover of Bonnie Raitt's "Give It Up Or Let Me Go." It's a nice lively rock tune to open the album. Perry Robertson's guitar part is excellent. It seems completely natural for Kelly to cover Bonnie Raitt. Both singers have such strong voices, full of passion and sometime fury.

"Nobody Here But Me" is a good rock song written by Kelly Zirbes. This song was also included on Kelly's Lot's 2008 release, The Light. This newer version is slightly longer.

Kelly's Lot's version of "(Get Your Kicks On) Route 66" has a cool swing vibe to it. It features a good bass line and a nice guitar solo. This song was written in 1946 by Bob Troup, and has been covered by a lot of bands over the years, including The Rolling Stones and Depeche Mode.

"Why Don't You Do Right"

"Why Don't You Do Right" begins with just the bass. (The previous song, "Mockingbird," ends with just the bass, so there's actually a nice transition there.) This song was written by Joe McCoy, and it has a similar feel to The Stray Cats' "Stray Cat Strut." In fact, when Kelly and Perry performed this song with The Brian Kinler Band, they paired it with that song.


"House Of The Rising Sun"

Kelly's Lot does a damn good version of "House Of The Rising Sun," a song made famous by The Animals. This CD has the song credited to Eric Burdon, but it's actually unknown who wrote the song (though it certainly was not Eric Burdon). The earliest known recordings are from the 1930s, a few decades before the version by The Animals. Also, Woody Guthrie recorded a version of it, and then in 1960 Joan Baez recorded a version. The song makes much more sense when sung by a woman.

There is an excellent jam on Kelly's Lot's version, driven by the guitar but also featuring some very cool work on drums by Robert Dill. And it actually ends with some more great jamming. Just listen to that guitar. Wonderful. (This is also the longest track on the CD.)

"Today" is just a fun song. It's an upbeat rock tune with some good lyrics written by Kelly Zirbes and Perry Robertson. Here is a taste of the lyrics: "And I do what I do/If it helps me get through/And I say what I say/If it helps my pain go away."

Kelly Zirbes does "Mercedes Benz" acappella, just as Janis did it. (Actually, Janis banged out a simple beat while she sang - something Kelly doesn't bother with.) It's something of a risk covering Janis Joplin, a woman who had one of the best (and most famous) voices in rock. But Kelly does a really good job with the song.

Kelly's voice seems like pure rock. Yet her voice works surprisingly well with jazz too. She has performed several of the songs from this album with The Brian Kinler Band, a piano-driven jazz band that often has her as a guest vocalist. Perry Robertson also sits in on guitar with the band for those shows. (They've performed "Give It Up Or Let Me Go," "Route 66" and "House Of The Rising Sun" with The Brian Kinler Band.)


Kelly's Lot is Kelly Zirbes on vocals, Perry Robertson on guitar, Rob Zucca on guitar, Robert Dill on drums and Matthew McFadden on bass. The album was recorded and mixed by Scotty Lund. Kelly's Lot is based in Los Angeles.
Posted by Michael Doherty at 3:36 PM