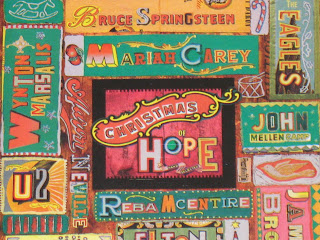 Christmas Of Hope was released to benefit City Of Hope National Medical Center, which is dedicated to finding cures for cancer, diabetes and other life-threatening diseases. Though this album was released in 1995, most of the recordings are from previous years. The exception is John Mellencamp's "Teddi's Song (When Christmas Comes)."

Bruce Springsteen introduces his famous rendition of "Santa Claus Is Comin' To Town" by saying, "It's all cold down along the beach. The wind's whipping down the boardwalk." He asks his band if they've all been good "and practicing real hard." He then asks the audience if they've been good. The audience responds. And Bruce teases them, "That's not many. You guys are in trouble out here."

This is certainly one of the only versions of this song worth listening to, mostly because Bruce Springsteen is clearly having fun with it. Another thing that makes recording worth listening to is the part where he breaks the song down and sings, "You better be good for goodness sake." He does that twice during the song. And the last thing making this worthwhile is of course Clarence Clemons on saxophone.

Mariah Carey's version of "Silent Night" isn't terrible, but because of the way the organ is played, one keeps waiting for it to break out into a bit of rock. And it doesn't. The backing vocals are really good. But the end of the song is obnoxious.

"New Year's Day" by U2 clearly isn't a Christmas song, and it really doesn't fit in with the rest of this album's selections. That being said, it's also one of this compilation's best songs. It was originally included on U2's best record, 1983's War, and was actually a single from that album. But again, it has absolutely nothing to do with Christmas.

Here is a bit of the lyrics: "And so we're told this is the golden age/And gold is the reason for the wars we wage/Though I want to be with you/Be with you night and day/Nothing changes/On New Year's Day."

But that aside, their Christmas song, "Please Come Home For Christmas," is harmless. But it's also a cover. The original version was released in 1960 by Charles Brown, and it's much better. There is a moment in The Eagles version that seems lifted from The Beatles song, "Oh! Darling."
This song was released as a single in 1978. It reached #18 on the U.S. chart.

Probably the coolest track from this compilation is "Let It Snow! Let It Snow! Let It Snow!" by Wynton Marsalis. Obviously, it's jazz, not rock. Wynton breathes new life into the song, finding interesting place for improvisation. This recording is from 1989 and appeared on his album Crescent City Christmas Card.

This version is from 1966. Other artists who have done good renditions of this song include Otis Redding, Chuck Berry and Bruce Springsteen.

Elton John has recorded a lot of great songs over the years. "Step Into Christmas" is not one of them. This is the weakest song on this compilation, though the short guitar section two minutes and twenty seconds in is nice. It was written by Elton John and Bernie Taupin, and was originally released as a single.

Aaron Neville's version of "Bells Of St. Mary's" is very cool. His vocals are impressive, and the backing vocals give the song an early 1960s feel. Though the song itself is actually much older, having been written in 1917 by A. Emmett Adams and Douglas Furber. This song has absolutely nothing to do with Christmas.

Reba McEntire turns "I'll Be Home For Christmas" into a country song. This song was written by Kim Gannon, Walter Kent and Buck Ram. The most famous version is still that by Bing Crosby.

Aretha Franklin can really belt out a tune like nobody's business. She makes "Joy To The World" seriously rock in this gospel-flavored number. This is certainly one of the best versions of this song ever recorded. There is enough power here to make even the staunchest of atheists cry out "Hallelujah."


This compilation was released November 14, 1995 by Sony Music Entertainment Inc.
Posted by Michael Doherty at 8:54 PM