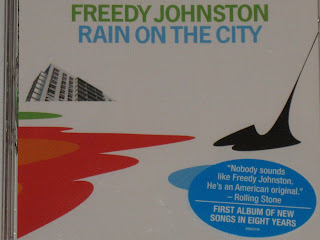 Many of these songs may seem simple at first, but that's deceptive, for there is a lot happening on this album. It includes the wonderful "Central Station."

The album opens with "Lonely Penny," a song with an interesting tone and perspective. A love song to a penny? The narrator relates to the nearly worthless coin, singing "Hey Penny we are the same/Are we both just waiting to be taken away." Freedy Johnston plays ukulele on this one, and it sounds great.

"Don't Fall In Love With A Lonely Girl"

"Rain On The City" Title Track

The title track, "Rain On The City," is a wonderful song about the city during a rainstorm, describing the various people and how they react. And then the narrator becomes the rain. He sings, "We will gather there up in the air and fly over everyone/We collide and change, and fall again on some city day." There are moments in this song when his vocals are stunning, just perfect.

"The Other Side Of Love" is more unabashed pop, with the echoing background vocals, but it's undeniably catchy. And it has a really cool part with David Briggs on the Wurlitzer at the end.
(David Briggs worked with Elvis Presley, Kris Kristofferson, Joan Baez and The Monkees.)

"Livin' Too Close to The Rio Grande"

There is a great country rock feel to "Livin' Too Close To The Rio Grande." Freedy sings, "Between the wife and the ex and the government, I never met a dollar that wasn't spent." This is a really cool and fun song that's over too soon. Steve Conn plays accordion on this track.

"Central Station" is a quiet acoustic song that seems innocent enough at first. But holy moly, it quickly sets its hooks in you. There is a lot going on in this wonderful song. It's sad and honest and brilliant in its seeming simplicity.

This is probably the best song on the album. Listen to it over and over with lights off and eyes closed.

"The Kind Of Love We're In" is a strange lounge song about a love that's already over.
"It's Gonna Come Back To You" is a simple, straightforward and effective song about karma. It's a good song, and it features Richard McLaurin on electric guitar.

The album concludes with "What You Cannot See, You Cannot Fight." This is an truly interesting song from a father's perspective, sung to his son about his son's troubles. And it's about the father's own troubles in dealing with this, feeling ineffective after the death of his wife, who was the parent who could handle such things.

Freedy Johnston does the lead vocals, guitars and ukulele. Pete Abbott plays drums on four tracks, as well as piano on "Don't Fall In Love With A Lonely Girl" and rhodes on "Central Station." Rich Malloy plays drums and percussion on the majority of the songs. David Santos plays bass on most of the songs. Richard McLaurin plays electric guitar on "Livin' Too Close To The Rio Grande" and "It's Gonna Come Back To You," acoustic guitar on several tracks, lap steel on "Lonely Penny," pedal steel on "Rain On The City," piano on "What You Cannot See, You Cannot Fight," rhodes on "Venus Is Her Name," percussion on "Central Station," accordion and mandolin on "The Other Side Of Love" and background vocals on several songs. He also produced the album.

The album also features John Lancaster on piano on several tracks, and B3 on two songs; Steve Herman on flugel horn on two songs; Chris Carmichael on strings on two songs; and Jason Eskridge, Daniel Tashian and Kate York on background vocals.

All the songs were written by Freedy Johnston.

Posted by Michael Doherty at 3:11 PM