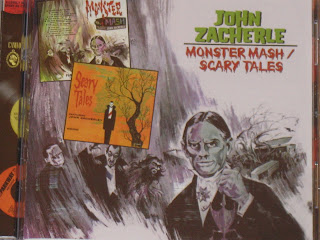 This release contains two complete albums by John Zacherle that were previously unavailable on CD. It's the perfect CD for Halloween (and really any time).

Collectors' Choice Music is continuing its series of classic Cameo-Parkway releases with four more titles this month, including this playfully twisted - and often hilarious - CD by John Zacherle.

Long before Elvira there was John Zacherle (and his alter ego, Roland, later renamed Zacherley). He hosted horror movies on television in Philadelphia and New York in the 1950s and 1960s. His popularity led to his making recordings for Cameo-Parkway.

This CD contains two complete albums by John Zacherle, as well as bonus tracks. Many of the tracks are parodies of hits by other Cameo-Parkway artists.

John Zacherle begins with a pretty straight-forward cover of "Monster Mash," the song made famous by Bobby "Boris" Pickett. If anyone can pull off a decent cover of this song, it's John Zacherle, and he does it in earnest - he's not making fun of the tune at all.

"Hurry Bury Baby" is a parody of "Hully Gully Baby" by The Dovells (from an album which, not coincidentally, is also being released by Collectors' Choice Music). Like that song, this one takes place in Miami with a girl named Sammy. John laughs as he tells his tale of romance troubles: "I held her tight - too tight/I squeezed and I squeezed some more/Till she didn't breathe no more/I had to hurry bury baby."

This song is hilarious and twisted, a perfect combination for Halloween (or for any other holiday if you want to it interesting).

"Gravy (With Some Cyanide)"

"Gravy (With Some Cyanide)" is an incredibly funny parody of "Gravy (For My Mashed Potatoes)." This version is about murdering the in-laws with some special gravy. He sings, "I'm serving dinner to my in-laws tonight/I'll be a winner if I play the game right/Got a gravy, oh what a gravy/That's going to kill all my in-laws'...appetite."

In "Limb From Limbo Rock" (the absolute best title on this album), John Zacherle offers a new strategy for winning the limbo. He sings, "Jack be simple, Jack be sick/Jack go under the limbo stick/To get in the limbo swim/Tear your partner limb from limb."

The original "Limbo Rock" was written by Kal Mann and Billy Strange, and was a hit for Chubby Checker.

"Pistol Stomp" is, of course, a parody of The Dovells' #2 hit, "Bristol Stomp." John sings, "The kids in Bristol all carry a pistol/When they do the pistol stomp." This one isn't quite as funny as the others, no nearly as twisted, but that might be because kids carrying guns is no longer a rare things.

"Dinner With Drac Part 1" is a wonderfully absurd song about being invited to dinner at Dracula's home by the sea. John sings that he "choked on my wine when I learned that the main course was me."

And check out this ridiculously delightful verse: "The waitress, a vampire named Perkins/Was so very fond of small gherkins/While she served the tea she ate forty-three/Which pickled her internal workins."

Dracula chides Igor for his mistakes in dinner etiquette, "The scalpels go on the left with the pitchforks."

"Dinner With Drac Part 1" was actually a hit single, reaching #6 on the Billboard pop chart in 1958. Kal Mann (under the pseudonym Jon Sheldon) wrote this one.

Monster Mash concludes with "The Bat," which begins with the sound effect of a bat flying. This is a song instructing the listeners on the steps for a new dance called The Bat. "You're going to flap your wings/All around and around the sky/Then you get in someone's hair/You can do it if you really try/All the chicks and cats are going bats."

The second album opens with its title track, "Scary Tales (From Mother Goose)." This song has an added layer of twistedness by the inclusion of children singing. The kids call out a character, and John sings a sick verse.

For example, the children call out, "Jack and Jill," and John responds, "Jack and Jill went up the hill/To fetch a pail of water/Only Jill came down the hill/You see, she was Dracula's daughter/And the pail looked more red than it oughta."

When this album was originally released, the first track of side one - that is, "Scary Tales (From Mother Goose)" - had three different versions. And depending on where a listener placed the needle,he or she would hear one or another version.

"Happy Halloween" is obviously a perfect song for Halloween, and it's also one of the album's most fun tracks. In it, John sings, "Through the nauseous night I'll soar/Through the pools of rancid gore/Through the sewer pipes I'll crawl/To the horror hall/ To the hall where vampires scream/Happy Halloween."

The ghastly guests include werewolves, witches, and vampires. This is one of the best Halloween songs ever recorded. Seriously, it's just wonderful.

Only John Zacherle could take the alphabet song and turn it into something twisted. He sings, "A-B-C-D-E-F-G/I'll smash you and you'll smash me /H-I-J-K-L-M-N-O-P/I'll beat your brains out - wait and see." And, "W,X and Y and Z/Now I'm going to dislocate your knee." And he laughs as he sings it.

How do we go about hiring this guy to teach kindergarten?


This CD was released on October 26, 2010 through Collectors' Choice Music in conjunction with ABKCO Music & Records.

Three other selections in the Cameo-Parkway series will be released on November 23, 2010: Dee Dee Sharp: It's Mashed Potato Time/Do The Bird; The Dovells: For Your Hully Gully Party/You Can't Sit Down; and a compilation titled Cameo-Parkway Holiday Hits (which features a very young Bob Seger).

The liner notes for this special release were written by John Sebastian (yes, of The Lovin' Spoonful) - how cool is that? John Zacherle turned 92 in September.