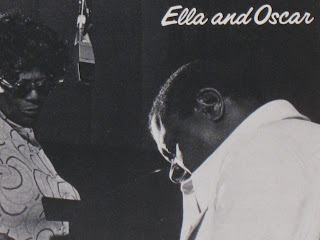 Ella And Oscar was recorded on May 19, 1975, and is being re-issued through Concord Music Group as part of its Original Jazz Classics Remasters series. This special re-issue includes four bonus tracks - all alternate takes, and all previously unreleased.

For the first side of the original record, it was just vocals and piano. I say "just," but when the vocals are provided by Ella Fitzgerald, they're no small thing, no trifle. You're not left wishing for more. She gives everything she has, and she has plenty. Add to that Oscar Peterson's tremendous talent on piano, and you've got some amazing music. The second side of the original album also features Ray Brown on bass.

The album opens with "Mean To Me," a song written by Roy Turk and Fred E. Ahlert. Right away the album makes you feel like you're in a living room in someone's house, and Oscar Peterson suddenly sits at the piano, and Ella Fitzgerald steps up next to him, and they just play. Maybe a fire is crackling. The wine flows freely They're taking requests. It has that intimate and loose feel. "Mean To Me" also features a nice piano solo. There is that wonderful play on the double meaning of the song's title in lines like, "Why must you be mean to me?" and "You shouldn't forget, you see, what you mean to me."

"How Long Has This Been Going On?"

Ella's voice is gorgeous on "How Long Has This Been Going On?" written by George Gershwin and Ira Gershwin. I love hearing Ella hit those sexy low notes and then dance and thrill up to the higher notes. There is a playful quality to the performance. There is also some great stuff on piano toward the end of the song.

"How Long Has This Been Going On?" was written for the musical Funny Face. Judy Garland, Cher and Carly Simon have also covered it.

An alternate take is included in the bonus tracks, and Ella sounds even sexier in that take - particularly sultry in the opening section of the song.

"When Your Lover Has Gone"

"More Than You Know"
Near the beginning of "More Than You Know," Ella sings, "Whether you remain or wander/I'm growing fonder of you/Even though your friends forsake you/Even though you don't succeed/Wouldn't I be glad to take you/Give you the break you need." Ah, to have a woman like Ella Fitzgerald say that to you. This is a gorgeous late-night song written by Vincent Youmans, Billy Rose and Edward Eliscu. Listening to this song, you can imagine Ella walking away from the piano, working the room, flirting with you - a look, a wink, a change in her voice.

"There's A Lull In My Heart"
Oscar Peterson starts "There's A Lull In My Heart" with some pretty and whimsical work on piano. Ella comes in just past the two-minute mark. She sings, "The world stops turning/The clock stops ticking/Everything stops but that flame in my heart that keeps burning." There something seductive and familiar in her voice that just draws you in, wins you over. You belong to her, and she's well aware of it.

"Midnight Sun" started the second side of the original record, and is the first track to feature Ray Brown on bass. He doesn't change the tone much - that is, he doesn't disrupt the wonderful intimacy of the recording. It's like he was in the room all along, and just now finished his drink and stood up to play with them. He adds a nice groove, working below Ella's voice.

There is another excellent take of this song included in the bonus tracks.

With "I Hear Music," it's the instrumental section - the piano and bass - that is the highlight of the track. Oscar is particularly wonderful on this one. Ray Brown really shines on "Street Of Dreams."

"April In Paris"
Paris has a mysterious magnetism. Even for those of us who have never been there, it has a draw, it has a hold on our imagination, our romantic side. Hearing Ella sing the word - just the word "Paris" - is enough to create an intense yearning to be there, to be a part of her world, the world of her song. To Know it. You know?

Add to that some wonderful piano playing by Oscar Peterson, and a damned good groove by Ray Brown on bass, and I'm completely lost in this dream.

Ella And Oscar was re-issued on March 15, 2011 through Concord Music Group as part of its Original Jazz Classics Remasters series. In addition to Sextet, three other titles will be released that day: Thelonious Monk Septet: Monk's Music; Cal Tjader/Stan Getz: Sextet; and Art Blakey's Jazz Messengers: Ugetsu.
Posted by Michael Doherty at 1:27 PM