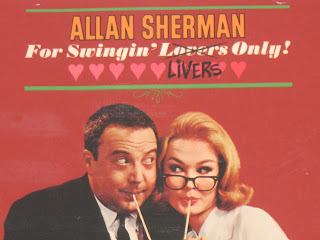 This album contains some of Allan Sherman's funniest songs, like "Grow, Mrs. Goldfarb," "J.C. Cohen" and "Pop Hates The Beatles."

For Swingin' Livers Only! is Allan Sherman's fifth album for Warner Bros. The title is a reference to Frank Sinatra's 1956 album Songs For Swingin' Lovers! In fact, on the cover it says "For Swingin' Lovers Only!" and the word "Lovers" is crossed out and replaced with "Livers."
This album, like his others, was recorded in front of a group of friends (who once again had access to an open bar). This album reached #32 on the Billboard charts.

Allan Sherman opens this album with "Grow, Mrs. Goldfarb," a song that pokes fun at one of his own problems - being fat. The song starts, "Grow, Mrs. Goldfarb, fatter, fatter/Pile the potatoes on your platter/Listen to me, 'cause I'm your hubby/I just adore you plump and chubby/I got a letter from the state, dear/You're gonna need a license plate, dear."

This song is sung to the tune of "The Glow-Worm." It's one of Allan Sherman's funniest songs, with lines like, "Love of my life, I'm glad I found you/Each day I take a walk around you/I can't forget when we got married/Over the threshhold I got carried."

"J.C. Cohen" is a parody of "Casey Jones." It tells of a subway conductor on the IRT. Allan compares him to another famous conductor, singing "And if you gotta travel uptown/He's a greater conductor than Leonard Bernstein." This song is about a subway that goes out of control, leaving New York City and going through Albany and Massachusetts and on to the North Pole.

Here is a bit of the lyrics: "They passed Columbus Circle doing 82/A couple minutes later they were under Bronx Zoo/J. C. shuddered, and he said, 'I guess/This used to be a Local, but it's now an Express.'" This is one of the funniest (and most fun) songs on the album.

Allan Sherman's biggest year was 1963. That year he released two number one albums, and his first album from the previous year was still on the charts. The year 1964 (the year of this album) belonged to The Beatles. But Allan Sherman gets in a few punches with "Pop Hates The Beatles," which is sung to "Pop Goes The Weasel."

Allan sings, "When The Beatles come on the stage/They scream and shriek and cheer them/Now I know why they're such a rage/It's impossible to hear them." Of course, that was something that the Beatles themselves were annoyed about. Allan also hits on the commercialism surrounding the band: "There's Beatle books and T-shirts and rings/And one thing and another/To buy my daughter all of these things/I had to sell her brother."

"Beautiful Teamsters" is a parody of "Beautiful Dreamers," and is about a man who wishes to join the Teamsters. Some of the humor comes from Allan Sherman mispronouncing words as a teamster might. The song ends with, "Tossing big boxes into the air/'Specially the ones that say, 'Handle With Care'/Beautiful Teamsters, won't you take me/Or I'll to back to practicing brain soigery."

"America's A Nice Italian Name" is a very funny song sung to the tune of "Funiculi, Funicula." It starts, "I live in Italy, the sky is sunny/'T'sa nice-a place. 't'sa nice-a place/And if you think the way I talk is funny/Shaddup-a you face. Shaddup-a you face." (And this was more than fifteen years before the song "Shaddap You Face.") It mentions all things Italian, such as the Tower Of Pisa, lasagna, Botticelli and La Scala.

And more of the humor comes from the little explanations Allan Sherman inserts after a line. For example, after the line "And a Japanese transistor radio," he sings, "And it has a wire with a thing on one end that you/Can stick in your ear, and a thing on the other end/That you can't stick anywhere, because it's bent." And for those who find "The Twelve Days Of Christmas" tiresome by like the sixth or seventh verse, Allan Sherman can totally relate. In his parody he sings, "And all that other stuff" sometimes, rather than actually listing everything again and again.

Allan Sherman recorded this song in 1963 for a holiday single. On that original release, the line was "a statue of a naked lady with a clock where her stomach ought to be." At some point a person at Warner Bros. decided to edit out the word "naked," and on the version for this album the word "naked" was not re-inserted. It's a shame this release didn't also include the single version as a bonus track.

"Bye Bye Blumberg"
This album concludes with "Bye Bye Blumberg," a joyous and silly song about a traveling salesman named Blumberg who believes that everyone loves him. It's sung to "Bye Bye Blackbird." It ends with, "Look up in the sky/You will find a Blumberg of Happiness."


Lou Busch once again arranged and conducted the music. The album was features the Jimmy Joyce Singers. For Swingin' Livers Only! is scheduled to be released on September 7, 2010.
Collectors' Choice Music is releasing all eight Allan Sherman Warner Bros. albums, which include My Son, The Folk Singer (1962), My Son, The Celebrity (1963) and My Son, The Nut (1963).