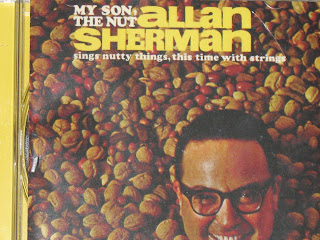 Also like the first two albums, My Son, The Nut reached #1 on the charts. It remained there for eight weeks, the longest of any of Allan Sherman's records.

The opening track on the album, "You Went The Wrong Way, Old King Louie," is about Louis XVI and the French Revolution. It's sung to the tune of "You Came A Long Way From St. Louis," and has the funny lines, "King Louis was living like a king/But the people were living rotten." But the best lines are probably, "We're going to take you and the queen/Down to the guillotine/And shorten you a little bit." The song is hilarious. And really, any song about the French Revolution that can somehow work in Brigitte Bardot is a winner.

"Automation" is a very pretty song at the start. Allan sings, "I thought automation was keen/'Til you were replaced by a ten-ton machine/It was that computer that tore us apart, dear/Automation broke my heart." This song is obviously still relevant. The line, "But you're only human and that's obsolete" gets a big laugh - and it is funny, but also sad. Of course, this song takes yet another comic turn. The machine that replaced the girl he liked then hits on him itself. Ah, nothing can get stop office romance, eh?

"Headaches" is about how commercials for aspirin actually give him headaches. The song ends with an anti-television line, which is interesting considering Allan Sherman produced television game shows before turning to recording albums. The line is, "Today I swallowed the best cure yet/I ate my TV set."

"Here's To The Crabgrass" is a duet with Jacqueline Ward. It's a song about moving to a home in suburbia where they will "live like Thoreau." The sweet simplicity that wins them over at first is exactly what drives them away eventually, back to the rat race of the city.

"Hello Muddah, Hello Faddah!" is Allan Sherman's most famous song. It's a letter from camp written from a boy's perspective to his parents. In the letter, he begs to come home. His bunkmate has malaria; another camper is missing; the lake has alligators - certainly not the usual complaints about camp. After all that, he says, "Oh please don't make me stay/I've been here one whole day." The lines, "And the head coach wants no sissies/So he reads to us from something called Ulysses" are wonderful, making a reference of course to the controversial novel by James Joyce.

This song was Allan Sherman's biggest hit. It's set to the tune "Dance Of The Hours," from Ponchielli's opera La Gioconda.

"One Hippopotami" begins as a lesson in language, with lists of odd plurals. Odd pairs. But then it plays off this, by joking about other "pairs," such as "paranoia" and "paradox," as in the line, "And when Ben Casey meets Kildaire, that's called a paradox."

Allan sings, "When two minks fall in love, with all their heart and soul/You'll find the plural of two minks is one mink stole." This is one of the album's best tracks. And Allan is doing his best Sinatra impression here. And remember, "A parallelogram is just a crazy square."

"Eight Foot Two, Solid Blue" is a description of a girlfriend from Mars. It's a crazy, swinging love song, sung to the tune of "Five Foot Two, Eyes Of Blue." And it's very funny.

Allan Sherman's third album ends differently than the first two records. While the first two ended with medleys, My Son, The Nut concludes with the funny and brief "Hail To Three, Fat Person." The song begins with the obvious joke about finishing one's food because of the starving people in Europe. Yet the song is hilarious. And it loses none of hits humor upon repeated listenings. And the thought of people actually following the advice he offers at the end of the song is just wonderful and hilarious. It's a great ending to the album as well. Send the people off into the world with a task. Why not?

Okay, here is how the song ends: "When you walk out on the street/And you see a fat person/Do not scoff at that fat person/Oh no! Take off your hat. Hold it over your heart/Hold your chin up high/And in a proud, happy voice, say to him/ 'Hail to thee, fat person! You kept us out of war.'"


As with the previous two albums, Lou Busch arranged and conducted the music for My Son, The Nut. And as for the other CDs, Dr. Demento (Barry Hansen) contributed the liner notes.

My Son, The Nut is scheduled to be released on September 7, 2010. Collectors' Choice Music is releasing all eight Allan Sherman Warner Bros. albums, which include My Son, The Folk Singer (1962), My Son, The Celebrity (1963) and For Swingin' Livers Only! (1964).