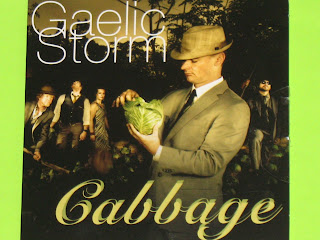 New studio release from Gaelic Storm captures the spirit and energy of this excellent Irish band.

Gaelic Storm is well known for putting on excellent concerts. The band's live performances are full of energy and joy. Gaelic Storm was the house band for O'Brien's in Santa Monica, California, for quite a long time. In those days they played three (and sometimes up to five) sets in a night. A fun time, to be sure. The band continues to put on extraordinary concerts.

Their new album, Cabbage, manages to capture some of the spirit of their live shows. This album, perhaps more than any other studio release, has the energy and power of their concerts.
This album might surprise some Gaelic Storm fans, as it definitely has more of a rock feel than some earlier releases. Particularly in a song like "Green Eyes, Red Hair."

"Raised On Black And Tans"

The album starts with a good drinking song called "Raised On Black And Tans." The song has a bit of silliness at the beginning - a false start. This is a wonderful song. It's fun, it has a great beat, and it has some nice work on fiddle. A black and tan is of course a drink that's a mix of a pale ale and a dark beer, such as Harp and Guinness. The lyrics include this line: "I go off to mass on Sunday/And then it's back to the pub on Monday." It also has this wonderful line: "I've never been to Ireland, but I know it's in my blood." A lot of listeners here in the states can relate to that line. Of course, singer Patrick Murphy was born in Ireland.

"Space Race" starts with a bit of laughter and noise in the background. It sounds like a small pub audience. Is this a live track, or just simulated? Either way, this song has the energy of a live performance. This song is about how Ireland is not part of the space race, with lines such as "I might be staring at the stars/But I keep both feet on the ground."

Instrumental Tracks
There are several instrumental tracks on this album. The first is "Blind Monkey." This a really cool song, and sounds a bit like the Glengarry Bhoys at times. Ah, listen to those bagpipes.
"Jimmy's Bucket" is a wonderful instrumental. It features fiddle, pipes and a great drum beat. What more could anyone want?

"The Buzzards Of Bourbon Street" starts off with bag pipes over a variation on the Bo Diddley drum beat. Holy moly, this tune starts strong, and then goes off into all sorts of fun territory. The drums are excellent. This is a great instrumental track.

"Crazy Eyes McGillicuddy" starts off like a traditional Gaelic Storm number, but has some interesting variations. (There is an acoustic guitar section that sounds oddly like the great guitar part of ELO's "Fire On High.") And then here is a fiddle and hand-clap section. Wonderful.

"Green Eyes, Red Hair" has a definite rock edge. The first few seconds give the impression that this is going to be a mellow song. But then it kicks in. It has a rock beat, and the vocals are sung differently from most of the rest of their songs. Some lines are nearly shouted, such as "Green eyes, red hair, long legs/She's got the devil inside her." Of course, this song still has a very present fiddle, balancing things out a bit. It's a fun song.

"Just Ran Out Of Whiskey"

"Just Ran Out Of Whiskey" is a cool tune about a guy who's a bit down on his luck. After all, the refrain is, "I just rain out of whiskey/And I'm stranded out at sea." What could be worse? This song has a different feel from most of Gaelic Storm's material. It's slightly reminiscent of some of T Bone Burnett's work. It's a bit of folk, a bit of rock and a whole lot of fun. This is a great song.

"Cecilia" is of course the Simon & Garfunkel song. This song was certainly the most fun of all the songs that duo recorded. And Gaelic Storm does a good job with it, adding its own spin and flavor to it, while remaining true to the feeling of the original. The instrumental section is wonderful.

The album concludes with a drinking song. Would anything else do? "Chucky Timm," like "Space Race," sounds like it was recorded at a pub with a small crowd. It has some great energy, particularly in the vocals.