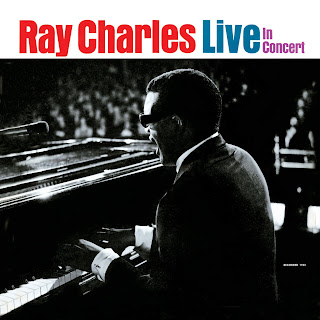 Live In Concert is a recording of the show that Ray Charles performed on September 20, 1964 at the Shrine Auditorium in Los Angeles, and this album captures Ray's energy, charm and soul. Included are great original songs like "What'd I Say" and "Hallelujah, I Love Her So," as well as some excellent covers.

Twelve of these tracks were released on vinyl in 1965 as Ray Charles Live In Concert. The other seven previously unreleased tracks surprisingly contain some of this CD's best material. For example, the two longest tracks, "Georgia On My Mind" and "In The Evening (When The Sun Goes Down)," were left off of the original record. And there is also the wonderful (and timely) "Busted."

There's not a lot of stage banter between songs. Ray Charles connects with his audience through the songs, not between them.

The album opens with an introduction, which mentions "the genius of Ray Charles," and then goes into the fast-paced jazz instrumental, "Swing A Little Taste." And it does certainly swing. This track immediately showcases what a great band is backing him. And Ray himself does a nice solo on piano.

From there, they go into "One Mint Julep." You can hear Ray calling the tune at the beginning of the track: "Okay, 'The Mint.'" This song contains a great moment when Ray sings, "Yeah, little bit of soul now," changing the tone mid-song. Wonderful. Ray Charles plays organ on this one, and it's one of the previously unreleased tracks.

"I Got A Woman"
Oh yeah, "I Got A Woman" is classic Ray Charles, with a wonderful opening. This was actually released as a single. When people think of Ray Charles, often it's this sort of tune they've got in mind. And understandably. This song is tons of fun - with that great positive energy Ray had in abundance. Near the end, there is that soothing repetition of "Feel all right," and damn if I'm not feeling all right myself.

"Georgia On My Mind"
"Georgia On My Mind" has a nice intro with Ray on organ. At the first word sung, the crowd explodes. This track was absent from the original vinyl release, and is one of the reasons why this CD is essential listening for any Ray Charles fan. This version is quite different from the studio recording. It's also the longest track on the CD, at approximately seven and a half minutes. Listen to Bill Pearson's playful work on flute. And the burst of horns at the end is fantastic.

"You Don't Know Me"
Ray Charles' voice is so gorgeous on "You Don't Know Me." So emotional, so full, so alive and so hurt. This might be the best version ever recorded of this song. Listen to the emotion, the pain in his voice as he sings, "For I never knew the art of making love/Though my heart aches with love for you/I'm afraid and shy/Well, I let my chance go by/A chance that you might love me too."

"You Don't Know Me" was written by Eddy Arnold and Cindy Walker. Other artists to cover this song include Jerry Vale, Elvis Presley and Bob Dylan.

Another of the previously unreleased tracks, Ray's beautiful version of "That Lucky Old Sun" is nice and slow, and highlights his vocal power. Written by Haven Gillespie and Beasley Smith, this is a song that was often covered in concert by The Jerry Garcia Band.

"In The Evening (When The Sun Goes Down)"

"In The Evening (When The Sun Goes Down)" is also one of the previously unreleased tracks. It starts with Ray doing some wonderful stuff on keys while Edgar Willis and Wilbert Hogan keep a steady rhythm on bass and drums. A very nice, cool intro. And then come the horns, and Ray's vocals. And the song just gets better. This is definitely one of the CD's highlights, with its glorious combination of horns and Ray's voice.

"Hallelujah, I Love Her So" is just pure fun. The crowd agrees - you can hear the audience clapping along. Written by Ray Charles, this song was a hit for him in 1956.

That song is followed by the equally fun "Makin' Whoopee." This is the only recording of Ray Charles performing this song. And man, does he sound cool on this one. This song also shows off his sense of humor, getting quite a few laughs from the audience.

"Busted" was previously unreleased, and it's one of the best tunes on the CD. In this one, Ray Charles sings about being broke, something more than a few of us can sadly relate to now. He sings that he has "A big stack of bills that gets bigger each day." He also sings, "Well, I went to my brother to ask for loan/'Cause I was busted/I hate to beg like a dog without a bone/But I'm busted today/My brother said there ain't a thing I can do/My wife and my kids are all down with the flue/And I was just thinking of calling on you/'Cause I'm busted myself." Man, everything Ray Charles sings is so believable. It's all in his voice, a voice that can make us laugh, cry, swing, shout, and do just about any darn thing he wants us to do.

"Busted" was written by Harlan Howard.

Live In Concert is scheduled to be released April 5, 2011 through Concord Music Group. Last year saw the release of another amazing Ray Charles album - Rare Genius: The Undiscovered Masters, also put out by Concord Music Group.
Posted by Michael Doherty at 1:51 PM