History Of The Grateful Dead - The 1970s 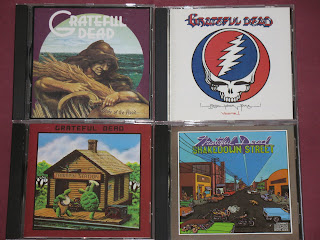 The 1970s were a decade of change for the Grateful Dead - band members, sound systems, record labels were all in flux.

The 1970s were a period of change for the Grateful Dead. The decade started with Ron "Pigpen" McKernan on keyboards and vocals and ended with Brent Mydland, and in between there Keith Godchaux held that position for several years. The decade saw what at the time was billed as their final show. It also saw them release several albums, as well as a movie.

The Grateful Dead released a lot of albums in the 1970s, at least one a year every year except 1979. The year 1970 saw the release of perhaps their two best albums, Workingman's Dead and American Beauty. These albums featured a different sound for the Grateful Dead - a more stripped down, acoustic, even country feel. These two albums also featured many of their most well known songs, including "Uncle John's Band," "Casey Jones," "Friend Of The Devil," "Sugar Magnolia" and "Truckin.'"

The Grateful Dead did a series of concerts with acoustic sets in 1970, featuring a lot of this new material as well as many traditional folk songs.

In 1971, they released a live album whose official Warner Brothers title is Grateful Dead, but which the band had wanted to call Skullfuck, and which most fans refer to as Skull And Roses because of the album cover art. The band toured Europe in 1972, and later that year released a live album of material from that tour.

Ron "Pigpen" McKernan, the original keyboardist for the Grateful Dead, was having health problems by 1971. After the band's show on August 26, 1971, he didn't do another show until December 1, 1971.

Keith Godchaux replaced Pigpen on keyboards. Keith actually played a grand piano. His first show was October 19, 1971, while Pigpen was taking a break. Donna Jean Godchaux, his wife, joined the band on backing vocals. Her first show was December 31, 1971, but she sang on only one song, "One More Saturday Night." Her first official appearance as a member of the band was on March 25, 1972.

At the end of its contract with Warner Bros., the band decided to start its own record label, Grateful Dead Records. The first album to be released on this label was 1973's Wake Of The Flood. Some of the band's most loved songs come from this album, including "Eyes Of The World" and "Stella Blue." Also on this album is Keith Godchaux's one contribution, "Let Me Sing Your Blues Away."

The Grateful Dead were always interested in getting the best sound possible for their concerts. Sound engineer/acid engineer Owlsey "Bear" Stanley began designing the Wall Of Sound, a distortion-free sound system.

The first show to feature the Wall of Sound was at the Cow Palace on March 23, 1974.

The Last Concert - Band Takes A "Break"
In 1974, the band decided to take a break. The October shows were to be the last shows, and in fact the final show of that run had "The Last One" printed on the tickets. That show was also the last show to feature the Wall of Sound. Another special thing about that show was Mickey Hart's return during the second set.

Those concerts were also filmed for what would eventually become the movie titled simply The Grateful Dead. A live album of songs from those shows would be released in 1976, titled Steal Your Face.

During the "break" the Grateful Dead did do a few concerts. They did four concerts in 1975. They also put out a new album, Blues For Allah. Also during the break, Jerry Garcia put together an incredible bluegrass band called Old And In The Way, and put out an album.

Meanwhile, Bob Weir had joined Kingfish, and put out an album with them.

The Grateful Dead was finally released in 1977. Jerry Garcia took it on as one of his personal projects, directing the film and overseeing the editing. The film really did work in capturing what the band and the concerts were all about, including lots of live performances, as well as footage of fans and a great scene where Phil Lesh explains the Wall of Sound. It also opens with a wonderful animated sequence.

The band started putting out albums on the Arista label beginning with 1977's Terrapin Station.

In 1978, they released Shakedown Street. (The band would continue to put out its studio releases on Arista through the 1980s and 1990s.)

Brent Mydland
In 1979, the band fired Keith Godchaux because they wanted someone who'd be willing to play more current keyboards and synthesizers. They found such a player in Brent Mydland. Brent had played with Bob Weir in 1978. Before that, he was a member of the band Silver.

The decade ended with a renewed energy in the Grateful Dead. The 1980s would be a different sort of decade for the band, with only two studio releases. However, it would begin the same way the 1970s began, with a series of shows featuring acoustic sets.
Posted by Michael Doherty at 1:46 PM