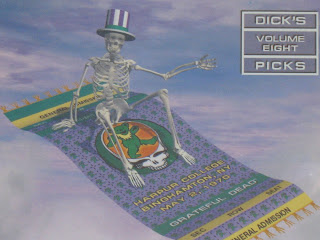 This three-disc CD contains almost the entire legendary performance at Harpur College in Binghamton, New York on May 2, 1970.

Tapes of this show circulated for years. It was a popular one on the bootleg circuit, and there's a reason for that. It was an amazing show, one of the band's best, with both acoustic and electric sets.

1970, An Interesting Year For Grateful Dead
That year - 1970 - was an interesting one for the Grateful Dead. They released two of their best albums (actually, perhaps their two very best): Workingman's Dead and American Beauty. Both had more of an acoustic feel, in sharp contrast to their earlier studio releases. Also that year they did acoustic sets to start a lot of their shows.

Many songs on the first CD were from these two albums - songs like "Friend Of The Devil," "Dire Wolf," "Black Peter," "Candyman," "Cumberland Blues" and "Uncle John's Band."

Once the monitors are working, the band jumps into a rocking acoustic "Don't Ease Me In." They then go into a nice slow "I Know You Rider." They did more verses of the song back in those days. There is a great regular fast version of "Friend Of The Devil."

While tuning before "Dire Wolf," Jerry tells the audience, "Everyone just relax, we have you all night long."

Audible is the discussion about how many beats to open "Beat It On Down The Line." The number they settle on is eight.

Ooo-wee, listen to that wonderful version of "Cumberland Blues." It's incredible. David Nelson (of New Riders Of The Purple Sage) joined them on stage for that song.

Second CD Is Electric, And Has A Great "The Other One"

The second CD starts with "St. Stephen," but the beginning of the song is missing. "Cryptical Envelopment" is cool, except for the stupid line, "His mind remained unbended." Boy, that line sure was a product of its time.

"The Other One" is awesome on this recording. A seriously rocking, powerful rendition of that song.

The second disc ends with a somewhat wild "Good Lovin'." It's got a cool drum solo in a few minutes into it. But when the rest of the band kicks back in, that's when the song really gets going.

"Cold Rain And Snow" Is Missing

The third disc starts with "It's A Man's World." It's great hearing Pigpen singing this song. They only performed this song in 1970, and only eleven times.

But where is "Cold Rain And Snow"? That's the one song missing from this CD. The Grateful Dead played it after "Good Lovin'" and before "It's A Man's World." There is plenty of room for it on either the second or third disc, as both are only approximately an hour long, and "Cold Rain And Snow" is a relatively short song.

After "Dancing In The Streets," the band took another break. The last three songs on the third disc are the third set. The third set starts with a great "Morning Dew," and then a nice long "Viola Lee Blues." It ends with "We Bid You Goodnight."

The following is the track list for Grateful Dead's Dick's Picks Volume Eight:

Posted by Michael Doherty at 1:50 PM