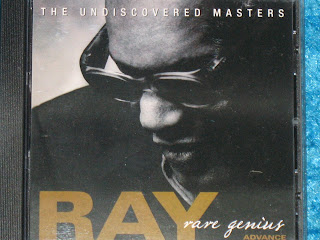 When Ray Charles died in 2004, the world lost one of its most soulful and joyful and honest voices. He left behind a great body of work, on albums and in films as well. (Who can forget his hilarious role in 1980's The Blues Brothers?) Of course it would stand that there would be a large amount of still unreleased material.

Rare Genius contains ten such tracks, including a duet with Johnny Cash on the Kris Kristofferson song, "Why Me, Lord?"

This CD is not the result of someone trying to cash in. This is no bottom-of-the-barrel collection of songs. Every one of these songs is a gem, and can be placed alongside the best of Ray Charles' output.

In fact, the only problem with this CD is the title. These songs are not "Undiscovered Masters." How could they be undiscovered if they're available on CD? The title should be Discovered Masters, for that is precisely what they are.

These songs were recorded in the 1970s, 1980s and 1990s. Some of these tracks have been added to. For example, on "A Little Bitty Tear," the drums hadn't been finished on the original masters. And so Ray Brinker came in on drums, and Trey Henry was added on bass.

"Love's Gonna Bite You Back"

The album begins with "Love's Gonna Bite You Back." It starts with a bright burst of horns and a pop rhythm. And then Ray begins singing, "Take a look at me and you will see I'm at the point of no return/Grab a chair and you can hear a lesson that I have learned/I thought I tamed love and I had it by the tail, but I didn't know how to act/If you don't love love like you know you should, you know love's gonna bite you back."

Ray Charles has the ability to take a song, a set of lyrics, and to turn it into a direct message from his heart to the listener. He makes the song so earnest, so heartfelt, as if it weren't something rehearsed or repeated, but rather something spontaneous that he needs to tell the individual listener.

"Love's Gonna Bite You Back" also features a pretty, quieter section, with strings. This song was recorded in 1980.

"It Hurts To Be In Love"

How was "It Hurts To Be In Love" left unreleased until now? This is an incredible song, and Ray's performance is phenomenal. The horn section does some truly amazing and wonderful things. Plus, this song is so nuanced and varied, and each section on its own is a thing of beauty. But all together, this song is among Ray Charles' best.

Ray ends it with some great vocal improvisation, as he sings, "You can do what you want to do, baby/I ain't gonna stop loving you/You, you, you/I must be crazy." "It Hurts To Be In Love" was written by Julius Dixon and Rudolph Toombs.

"Wheel Of Fortune" is a slow and pretty song written by Bennie Benjamin and George David Weiss. It has a 1940s feel, and was in fact written in 1951, and was a hit for Kay Starr in 1952. This version by Ray Charles from 1972 is beautiful. It features a nice bass line, and some great work on horns.

Sections of "I'm Gonna Keep On Singing'" have a funky disco beat. Ray Charles stops the song several times for spoken word sections. The man is just so cool. He can do anything - anything - and make it work. The song features some nice backing vocals.

The instrumental section of "I'm Gonna Keep On Singin'" is a whole lot of fun. It has a great rhythm and just terrific work on horns. This will get 'em dancing. This song was recorded in (or about) 1995.

"There'll Be Some Changes Made"

"There'll Be Some Changes Made" starts, "There's a change in the weather/And a change in the sea/From now on there's gonna be a change in me." Then a few lines later, Ray Charles sings, "Nothing about me is going to be the same." It's a sad and yet hopeful sentiment, and Ray can sell it like no one else. This song has a slow groove that works perfectly with the lyrics. "There'll Be Some Changes Made" was written by William Blackstone and Benton Overstreet.

"I Don't Want No One But You" is a song in which Ray Charles is asking a woman to come back to him. It's almost inconceivable to think a woman could hear him plead this way, and not be moved. Every man wants that kind of power, that kind of voice, that kind of soul that Ray Charles had.

Ray Charles' take on Hank Cochran's country song "A Little Bitty Tear" is incredible. It's bluesy and soulful, and the backing vocals blend perfectly with Ray's voice. This song is gorgeous. It has been recorded many times, and Burl Ives had a hit with it in 1961. This version by Ray Charles was recorded in 1983.

"She's Gone" is an upbeat song about the pain of losing someone. It has a bit of a country beat, particularly in the bass.

Rare Genius concludes with Ray Charles covering a song written by Kris Kristofferson, with Johnny Cash singing lead. How could it be anything less than stellar? "Why Me, Lord?" is a gospel-style song recorded in 1981, with Ray Charles doing some wonderful stuff on keys. This is an obvious highlight on an album full of excellent material.


Ray Charles released many records from the 1950s right up to the year of his death. Rare Genius is scheduled to be released on Concord Records on October 26, 2010.