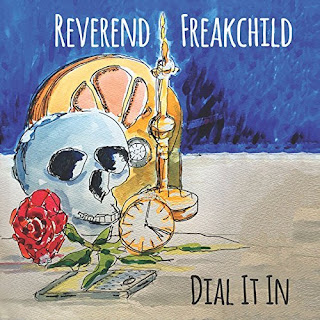 We are now approximately sixty-three years into the Trump administration, and everyone is feeling exhausted, anxious and ill. When will this horror show be canceled? It’s anyone’s guess. Let’s hope it happens before democracy and the planet itself are completely destroyed. Meanwhile, folks continue to release good albums to help sustain us, help us keep our heads above the river of shit pumping out of the White House, help us retain at least a shred of faith in humanity. And in a time when the whole damn world seems to have the blues, the blues might be just the force to save us. Dial It In, the new release from Reverend Freakchild, features music based in the blues, but with other elements as well. Unlike his previous release, Preachin’ Blues, which was a solo album, this one finds several special guests joining the good reverend. Folks like Hugh Pool, Chris Parker, Jay Collins, Mark Karan, and Hazel Miller perform on various tracks. Most of the tracks were written or co-written by Reverend Freakchild, but there are a few good covers as well.

Dial It In opens with “Opus Earth,” which has a glorious back porch blues feel, but has some other things happening too, an ethereal, otherworldly wind blowing in, and strange beings taking part in some spiritual dance. And then more than halfway through, the vocals start, the lines delivered as spoken word. “Grant your blessing so that the path may clarify confusion/Grant your blessing so that confusion may dawn as wisdom.” This wild combination of sounds is effective and intriguing. I’m on board, and curious where the good reverend will take us on the rest of the journey of this album. What follows is a very cool rendition of “Personal Jesus,” here titled “Personal Jesus (On The Mainline).” This is a driving, bluesy version of the Depeche Mode song, with some cool work on guitar. And I love the harmonica when this one kicks in (that’s Hugh Pool on harmonica and backing vocals). From the title, I did expect it to be a medley with “Jesus On The Mainline,” but none of that song’s lyrics are included.

“Hippie Bluesman Blues” is a kind of playful tune, with some phrases that made me smile, like “psychedelic cul-de-sac.” Mark Karan (known for his work with RatDog) is on lead guitar and backing vocals; Hugh Pool is on rhythm guitar; Robin Sylvester is on bass; Chris Parker is on drums. “Dial It In!,” the title track, has a great groove and a cool lead vocal performance, with some good backing vocals, all of which help to make it one of my personal favorites. By the way, the backing vocals are by Hazel Miller and Garrett Dutton (G. Love). This one also features some fun stuff on harmonica by G. Love. And man, I dig that bass line by Tim Kiah. This is an all-round damn fine track. Here is a taste of the lyrics: “Well now, can we go beyond/What we think of as right and wrong/Like loss and gain, obscurity and fame/Praise and blame, and pleasure and pain.” That’s followed by “Skyflower,” which also has a good rhythm, but is quite pretty at times.

“Roadtrance” is a trippy, kind of heavy jam. “Roadtrance” is a good title for it, particularly if the road goes through some strange, harsh alien landscape. Then in “Damaged Souls,” Reverend Freakchild asks, “Is life but a dream?” These days it’s a nightmare for anyone with a soul. This is an interesting track, making use of some familiar lines like “Well now, things ain’t what they seem” and “Well, you may be done with your past, but it ain’t done with you.” His vocal delivery at times reminds me of Lou Reed. “All I want to do is comfort you.” Ah, we all need that, don’t we? Particularly now, when a gross, mendacious racist is doing his best to drive the country to ruin, and his moronic followers are itching for civil war. This song is another of the disc’s highlights. Then “15 Going on 50” comes on like a classic rock ‘n’ roll country roadhouse tune, with fun work on piano by Brian Mitchell. “You’re between realities.” Oh yes. Rachel Benbow Murdy (who sang on “Janine” on Soul Coughing’s first album) provides backing vocals on this track.

Reverend Freakchild delivers an interesting take on Bob Dylan’s “It’s Alright, Ma (I’m Only Bleeding).” It has a blues base, with some cool work on saxophone by Jay Collins. I love that saxophone; it gives the song a different voice, a different sense. Also, Chris Parker’s work on drums has a kind of jazzy feel. The reverend inserts some interesting pauses; for example, he allows a slight pause after “While others say don’t hate nothing at all” before “except hatred.” The line “But even the president of the United States must sometimes have to stand naked” has a different feel these days, doesn’t it? After all, there is a good chance we are soon going to be seeing naked pictures of Donald Trump, after which we will all want to scrub our eyes with bleach. I like this version of “It’s Alright, Ma” more and more as it goes on. Reverend Freakchild gives a strange delivery of the line “What else can you show me.” This rendition gets a little chaotic toward the end, which works well. I definitely recommend checking out this version.

Another highlight is Reverend Freakchild’s rendition of Blind Willie Johnson’s “The Soul Of A Man,” here titled “Soul Of A Man.” Ah yes, some classic blues, but with some new lyrics. Here, the reverend is joined by Lisa Marie on backing vocals. I love Reverend Freakchild’s work on National steel guitar. Well, the album began with “Opus Earth,” and it ends with “Opus Space,” which is basically the same thing, back porch blues with that strange atmosphere surrounding it. It’s like the wild journey has brought us back to the beginning. Are you ready to go round again?

CD Track List
Dial It In was released on CD on April 1, 2018 on Floating Records.
Posted by Michael Doherty at 5:29 PM