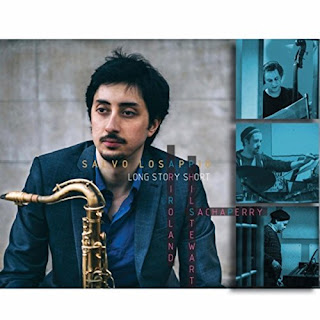 If you are in the mood for some good, honest jazz, you might want to check out Long Story Short, the debut album from tenor saxophone player Salvo Losappio. Born in Italy and now residing in New York, Salvo Losappio started on alto saxophone before switching to tenor several years ago. Joining him on this release are some seriously talented players from New York, including Sacha Perry on piano (Perry is a band leader himself, with the Sacha Perry Trio), Ari Roland on bass (Roland is a band leader as well, with The Ari Roland Jazz Quartet), and Phil Stewart on drums (Stewart has played with a lot of bands, and recently released his own CD, Melodious Drum).

The album opens with a rendition of “Shaw ‘Nuff” that has all the excitement and energy of early jazz recordings, when things were daring – at least, that’s the sense I get. It’s fast and wonderful and real, and feels spontaneous and alive, exactly how a Charlie Parker composition should be. Lose yourself in the moment, or wrap yourself in the moment, breathe, tap your toes and let go. This track includes a brief drum solo toward the end. Then “The End Of A Beautiful Friendship” (often simply titled “A Beautiful Friendship”) starts off with piano, which has an interesting tone; it’s mostly romantic, but with something of a darker feel over it. Or am I mad? Anyway, the band then kicks in, and the song has a cool, gentle swing to it, with Salvo Losappio’s saxophone taking on the vocal line, and moving perhaps a bit more briskly than some other renditions. It eases in its own direction, and has a good, cheerful vibe about it, which I certainly appreciate.

“Boerum Hill,” an original composition by Salvo Losappio, is one of my favorite tracks. It moves at a quick pace, racing to get there while simultaneously already being there (you know?), the notes just flowing out of that saxophone – naturally, effortlessly, like the sax itself is telling a story, holding you captive with every sound. It’s tremendous, but in some ways I find the bass work even more impressive, holding everything together, and moving like a maniac too – and I’m talking about his work even before the great lead section. Phil Stewart’s drum solo starts off simply, then builds, and seems to tell a story as well. Wonderful playing all around. The group then slows the pace again with Duke Ellington’s “Sophisticated Lady,” this version beginning with just saxophone and featuring more wonderful work by Ari Roland on bass.

“Leo For Two,” another original composition, has a cheerful vibe, and is making me feel like the world is a pretty good place (despite the existence of people like Donald Trump and Ted Nugent, two pricks who should be removed from Earth as soon as possible). This one will gently spin you round and lift you up. There is a short drum solo toward the end. That’s followed by another delightful, quickly moving gem, “Avalon.” Sacha Perry is flying over the keys like some wild, amped-up sprite, and once again I am impressed by Ari Roland’s work on bass. And Phil Stewart does some wonderful (and wonderfully varied) stuff on drums. On top of all that, Salvo Losappio drives things forward, aiming the vehicle straight up the mountain and on higher after that. The album then concludes with “I Don’t Stand A Ghost Of A Chance With You” (sometimes shortened to “I Don’t Stand A Ghost Of A Chance” and here shortened further to “A Ghost Of A Chance”).  The saxophone has a romantic air, but things don’t get overly sweet in this rendition. There is still some excitement, particularly in Sacha Perry’s piano work.

CD Track List
Long Story Short is scheduled to be released on May 15, 2018 on Gut String Records.
Posted by Michael Doherty at 5:19 PM