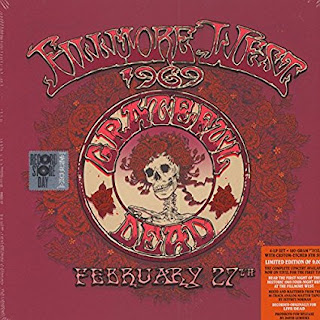 My main purchase on Record Store Day (this past Saturday) was the Grateful Dead box containing the complete show the band performed at the Fillmore West on February 27, 1969. The show is on four records (though the fourth contains only one, relatively brief song), and the box contains an insert about the concert. As most of you are aware, this show was recorded for the album Live/Dead, so some of this material has been available for decades. Also, a CD box set of the entire four-night run at the Fillmore West was released back in 2005. But this new release marks the first time the show has been made available on vinyl.

The band opens the first set with “Good Morning, Little Schoolgirl,” which kind of eases in. Then Pigpen’s harmonica really gets the song underway. Pigpen gives an interesting pause before “help” in the line “I just can’t help myself.” The crowd didn’t have to wait long for a jam this night, eh? This version is more than eleven minute long, and Pigpen is sounding smooth at times. It’s certainly not the wildest version I’ve ever heard the band do, but they were just getting started. There is a bit of stage banter before the band begins “Doin’ That Rag,” a song that would be included on Aoxomoxoa, which was released later that year. It’s great hearing a live recording of this one, a song the Dead didn’t play all that much, or for that long. And this version has that totally delightful ending. There is some stage banter following the song as we hear hints of “Cryptical.” And just before the first side ends, we hear Jerry say, “It’s really too weird up here.”

Side 2 begins with Jerry saying “It’s really too weird up here,” adding a few other comments. The band then does the entire “That’s It For The Other One,” which takes up the whole album side. It begins with “Cryptical Envelopment,” and then a brief drum solo, and Phil’s monstrous bass leads into “The Other One,” a powerful, loud explosion. I love “The Other One.” This is a song that the band tackled differently every time, a song that refused to be tamed or subdued. The band jams on it for a while, as if trying to get it under control, before Bob delivers the first verse. Check out the guitar after the first verse. And I dig what TC is doing during the second verse. This is a fantastic “Other One.” It then goes straight back to “Cryptical.” And after a mellow jam, Jerry comes back in, repeating “He had to die.” And the jam becomes heavier again. There are more peaks and valleys, of course, with the tune getting quiet for a few moments, as if to bring us in for a gentle landing. And that’s the end of the short first set. The band asks everyone to stick around for the second set. “The second set will be the long set,” Jerry promises. And Bobby says that they’ll bring out the monkeys.

The second set begins with “Dupree’s Diamond Blues,” played on acoustic guitars, and is followed by a nice “Mountains Of The Moon,” both of which would be included on Aoxomoxoa. I particularly like the jam toward the end of “Mountains Of The Moon.” It goes straight into “Dark Star,” and that’s when Side 3 fades out, because “Dark Star” needs its own side.

Side 4 begins just a moment before the band starts “Dark Star,” so there is just a bit of overlap with the previous side. That way, we don’t miss a note, you know? This song was included on Live/Dead. As you already know, it’s a phenomenal rendition of “Dark Star,” with everything coming together perfectly, and yet also entering into some wonderfully weird territory. At the end we hear the very beginning of “St. Stephen.”

Side 5 begins with “St. Stephen,” this version also appearing on Live/Dead. This too has excellent peaks and valleys. The band is on, as they make their way through this complex tune, including the “William Tell” section. That leads directly to “The Eleven,” which features a great, rocking jam before the band begins the vocal section. And the jam takes off again after that. It begins to go into “Turn On Your Lovelight,” and the side fades out.

Side 6 begins with the last moments of Side 5, as the band goes into the second set closer, “Turn On Your Lovelight.” The first set began with a Pigpen tune, and the second set closes with one. Now Pigpen is at full force, and the band is right with him. Pigpen gives us, as he says, a taste of his woman. Oh, there is plenty of Pigpen’s rap in this version.

As for Side 7, it’s interesting that rather than putting “Cosmic Charlie,” the encore, at the end of Side 6 (it seems like it would fit), they included a fourth record containing just that one song. In high school, I had a beautiful blue fish, and that fish would dance whenever I put on a Grateful Dead album or bootleg tape. Seriously. No reaction to any other music, but when I put on the Dead, he would get excited, dancing, even jumping out of the water (I had to keep his bowl only half filled because at least once he managed to get completely out of the bowl; later I just purchased a tank for him, so he’d have more dancing room). That fish was named Cosmic Charlie, after one of my favorite Dead songs, one I wish I could have seen them perform in concert. Anyway, before the song, there’s a bit of stage banter. Bob introduces the song as “a sentimental number.” It’s a good version, and ends gently. And that’s all for Side 7.

Side 8 contains no music, but there is a cool etching in the vinyl. As much as I like the look of that etching, it seems it would have made more sense to include some filler on this record, perhaps some music from the next night’s show.