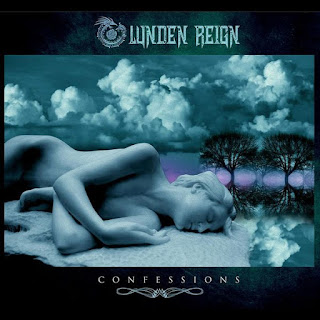 Okay, I admit that I am a sucker for colored vinyl. And Confessions, the new record from Lunden Reign, is offered in an incredibly appealing aquamarine shade, with a slight marbled quality. Basically, it’s beautiful. One thing I love about records is the physical relationship it creates between you and the music. And the colored vinyl just makes that relationship even more enjoyable. All right, enough about that. Lunden Reign is a Los Angeles rock band, the core of which is the duo of Nikki Lunden on lead vocals and guitar, and Laura Espinoza-Lunden on guitar and keys. Both contribute material to the new album, which is the band’s second full-length album, following 2015’s American Stranger. Luis Maldonado, who produced the album, plays guitar, bass and keys (and also co-wrote the music). Also on bass are Mathew Denis and Devin Hoffman; on drums are Matt Lucich and Noel Jasso.

Side 1 kicks off with “Stardust Daze,” a strong and positive rock song in which Nikki Lunden sings “We have to find a way/We’ve got to find our way/We’re living in the face of dreams/And everything we’re living for/Is something that’s worth fighting for.” The vocals are delivered with passion and honesty. This is a song I like more each time I listen to it. It’s followed by “Confessions,” the record’s title track. This one is a harder song, with more of an uneasy edge, and it grabs me from the start. I absolutely love the vocal line on this one. It’s interesting that revealing one’s self is akin to confessions.

The first lines of “Coming Home Tonight” are “For days I’ve been so haunted by/Your fierce embrace/And bewitching eyes,” and there is something haunting in the vocal delivery. Then, when it kicks in for the chorus, it becomes more firmly rooted in the pop realm. This song features some unusual lyrics, like these lines: “A portrait of a charcoaled girl/Drawn on sheets on a tilt-a-whirl.” (My friend once vomited on a tilt-a-whirl, and tried to hold it in his mouth, and every time we’d pass by the guy running it, my other friend and I would shout out to him to stop it. The guy ignored us, and eventually, well, my friend couldn’t keep it in. I haven’t been on a tilt-a-whirl since. Okay, slight digression there. Sorry.) “Coming Home Tonight” is followed by “Red Wagon.” In this one, they sing “And we can’t go back to yesterday.” That’s true, and yet this song itself takes me back to an earlier time. Something about its sound makes me feel like I’m a child again, and that’s part of the point of the song. No, we “can’t return to yesterday,” but we can certainly revisit the way we felt then. Likewise, “Little Girl,” which concludes the first side of the record, might take you back. There is something of a 1980s rock thing happening, which I like.  I also really like the way Nikki approaches the vocals, particularly on the chorus. This one also has a positive vibe, urging us to not give up, with lines like “And the sky/Won’t fall upon you this day/And the moon/Will shine until a new day/Comes to me and you.”

Side 2 opens with “Fate Of The World,” rock song of a certain, heavier mood. “These modern day times/Such criminal minds/We’re led into a dark story.” That is true, though I’m doing my best to not let myself be pulled down into it. It’s difficult to separate yourself, to not be affected, isn’t it? This song obviously has something to say about our world, our current situations. Lines that stand out to me as being particularly pertinent are “They’re spewing out lies/Dreams to start to unwind” and “They led us along/Why didn’t we care?” That’s a big question I have these days, even as I try to care a little less myself, in order to keep from completely succumbing to despair or anger. Ah, where is that line? To be informed and concerned with being inflamed and consumed. “Never Ending Dream” takes place in this same dark world, but has a slightly more romantic bent. “Hold me tight so I can sleep/When I wake I want to be/In your arms where I don’t care/If my ghost brings me despair.” How about those lines?

“Dead Man Walking” is a fairly powerful song about the dangers of hard drugs. Nikki gives a passionate, angry vocal performance, and the vocals are what sell the song. “The desperation in his eyes/Believing in the needle’s lies/Fingernails scratch down his spine/Wasted by the demon spies.” Then “Thunder Or The Rain” has heartache and a sense of powerlessness, though you get the feeling she finds strength even in those powerless moments. The album finishes with “Faded Memories,” which hooks you immediately with that guitar part, which has a bit of punk to its style. “Time cuts deep/Recollections bleed/Tearing pages from a book/That you will never read.” A strong finish to a really good record.