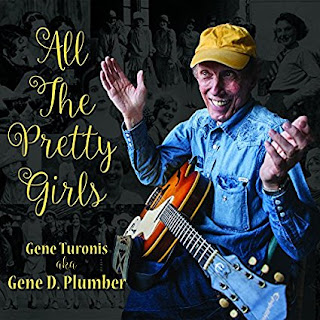 Gene Turonis, also known as Gene D. Plumber, has apparently been performing for several decades. Performing in two very different realms, I should mention, that of a plumber and that of a musician. Yeah, the moniker Gene D. Plumber is due to his actually working as a plumber (and the band he’s played with is called The Plumbers). His plumbing and his music have been restricted to the Hoboken area. Until now, that is. With the national release of All The Pretty Girls, his new album, he’ll be getting exposure across the country. (His plumbing might still be restricted to Hoboken.) The album features a mix of original tunes and covers. Joining Gene D. Plumber are Charlie Giordano on accordion and piano, Adam Krass on fiddle, Marc Jonson on organ, and Tim Tindall on bass.

He opens the album with its title track, “All The Pretty Girls,” an original number with the accordion featuring prominently. It’s kind of a playful, delightful song with profound lyrics like “All the pretty girls feed me a sandwich.” And how can you help but love him when he begins his goofy “Wah wah” part?  That’s followed by another original tune, “Round And Round We Go,” which Gene wrote with Emily Turonis. This song has a cheerful, friendly vibe, and includes the happy sound of whistling. It’s a song that should disarm you and raise your spirits. The lyrics are delivered with sweetness. “But let’s not think about the past/Let’s think about this melody/With my arm your waist/And you holding onto me.”

Gene Turonis delivers an interesting a cover of the old rock and roll tune “I Like It Like That.” This song was written by Chris Kenner and Allen Toussaint, and was a hit for The Dave Clark Five back in the sixties. Gene’s version has a delightful energy, and feels like a party down south. That’s followed by another cover, “Things Have Gone To Pieces,” a song that was recorded by George Jones and then later by Merle Haggard. The first line of this country song certainly is appropriate for a singer/plumber: “The faucet started dripping in the kitchen.” And maybe that’s the reason he chose to cover it. His version features some whistling, and a really nice vocal performance, but perhaps what I like most about this track is Adam Krass’ work on fiddle.

“Let’s Make A Deal – Marriage Proposal” has an early rock and roll energy, particularly in the work on keys. This is a playful, fun number. Check out these lines: “A beautiful woman is a wonderful thing/When your beauty is showing, that makes the man in me sing/You got it, you got it, you got it/I want it, I want it, I want it.” Yeah, there is a good deal of humor to this one. It’s followed by a wonderful rendition of “Going Back To Louisiana,” written by Clarence “Gatemouth” Brown, this rendition featuring more whistling and more nice work on piano. Gene shows his sense of humor again in “Been A Fool All My Life,” a self-deprecating song about the many mistakes he’s made. “I’ve been making stupid moves since I don’t know when/Never learning from the past, repeating it over again/From my very first used car, to my last ex-wife/I’ve been a fool all my life.” And he has enough experience in his voice to make this song really work.

In “I’d Have To Be Crazy,” Gene sings “Oh, I may not be normal, nobody is.” Ah, I’ve been saying that for years. “Normal” is just someone you don’t know all that well. The main line, however, is “I’d have to be crazy, plumb out of my mind, to fall out of love with you.” Yes, it is a sweet song. It was written and recorded by Steven Fromholz. Willie Nelson has also covered it. “She Belongs To Someone” is fun from the start, even before the humorous line “She belongs to someone and I’m glad it ain’t me.” This song is a delight. One line that stuck out for me is “She’s probably listening to Thriller.” The specificity caught me by surprise.

The album’s final cover is a really nice rendition of “I Always Get Lucky With You,” here shortened to “Always Get Lucky.” This is another song that was recorded by both George Jones and Merle Haggard. Haggard wrote it with Freddy Powers, Gary Church and Tex Whitson. The album then ends with “George Jones, George Jones.” On the CD case, it’s labeled as a bonus track, but I have never understood how a song could be a bonus track on the album’s first release. It’s not a bonus track; it’s a track. Well, however you label it, it’s a really good song, with a bit of a raw and immediate sound, just vocals and guitar.

CD Track List
All The Pretty Girls is scheduled to be released on May 11, 2018 on Bar/None Records.
Posted by Michael Doherty at 9:04 PM