Lloyd Green And Jay Dee Maness: “Journey To The Beginning: A Steel Guitar Tribute To The Byrds” (2018) CD Review 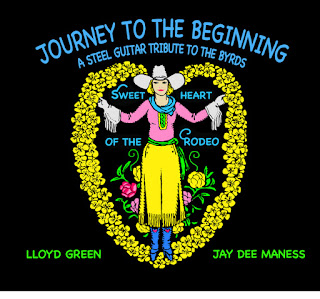 The very first folk, or singer/songwriter, concert that I attended (or that I recall attending, anyway) was Roger McGuinn, of The Byrds. I was a teenager, and the show was at The Old Vienna Kaffeehaus (a venue that no longer exists) in Westborough, Massachusetts. It was that show, back in the late 1980s, where my passion for folk music really began in earnest (Ellis Paul was the opener). And it was around that time that I purchased Sweetheart Of The Rodeo. Before that, the only Byrds album I owned was Greatest Hits (a compilation which had come out before Sweetheart Of The Rodeo and so contained none of that material). Anyway, Gram Parsons had just joined the band, and the sound of this album was a whole lot different from the band’s earlier releases. The record also featured two steel guitar players – Lloyd Green and Jay Dee Maness. Both have since gone on to pretty damn good careers, and now they are revisiting that material on their new album, Journey To The Beginning: A Steel Guitar Tribute To The Byrds, an excellent and beautiful instrumental tribute to that record (Sweetheart Of The Rodeo turns fifty this year). And for you fellow vinyl enthusiasts, the album is being released on vinyl tomorrow as part of Record Store Day.

This release presents the songs in the same order as the original album, with one addition – a vocal reprise of “You Ain’t Goin’ Nowhere” at the end. So it begins with “You Ain’t Goin’ Nowhere,” the album’s most famous track, which was also released as a single. The song is one of several Bob Dylan tunes that The Byrds covered over the years. By the way, joining Lloyd Green and Jay Dee Maness on this release are Russ Pahl on guitar, Dennis Crouch on bass, John Gardner on drums, Sam Bush on mandolin and fiddle, Eugene Moles on guitar, Al Perkins on guitar, Sally Van Meter on Dobro, Earl Poole Ball on keys, Skip Edwards on keys, and Peter Wasner on keys. They have several vocalists joining them for that final track: Jim Lauderdale, Herb Pedersen, Richie Furay, and Jeff Hanna. On backing vocals are Matraca Berg, Jim Photoglo, Bill Lloyd and Marc Lacuesta. Not a bad group of musicians and singers, eh? The focus, of course, is on the steel guitar, and these guys do some delightful work on “You Ain’t Goin’ Nowhere.” This music is making me happy, something I appreciate more and more in these dark days of Donald Trump.

“I Am A Pilgrim” was also released as a single, though I don’t think it fared all that well on the charts. This version features some nice work on fiddle by Sam Bush. One of my favorite tracks on this release is “The Christian Life,” which surprises me because it’s not a particular favorite of mine from the original record. I always liked it, but never loved it. I am loving this rendition. My favorite track from The Byrds’ album has always been “You Don’t Miss Your Water,” and the version here is certainly another highlight. Perhaps the most fun track on this album is “Pretty Boy Floyd,” with that delightful exchange between fiddle and guitar. But each track offers its own delights and surprises, and I find myself smiling through the entire album. Perhaps especially during “Blue Canadian Rockies,” and when you hear it, I imagine you’ll be smiling too.

The original Byrds album ends with “Nothing Was Delivered,” another Bob Dylan song, which offers this sound advice, “Take care of your health and get plenty of rest.” Of course, this version doesn’t contain that line, but listening to this album will help with your health, at least soothing your soul. And, as I mentioned, this release doesn’t end there. We get another version of “You Ain’t Goin’ Nowhere,” this one with vocalists joining in. Jim Lauderdale, Herb Pedersen, Richie Furay (of Buffalo Springfield and Poco), and Jeff Hanna (of The Nitty Gritty Dirt Band) each sing lead on a verse. The Byrds’ rendition of this song includes a mistake in the lyrics, with the line “Pick up your money, pack up your tent” being sung as “Pack up your money, pick up your tent.” Interestingly, that error is duplicated here. So they are really sticking to The Byrds’ album. It’s a wonderful rendition, and a perfect ending to this album.

CD Track List
Journey To The Beginning: A Steel Guitar Tribute To The Byrds is available on CD, and is being released on vinyl tomorrow as a Record Store Day limited release. By the way, if you live in Nashville, you have a chance to catch Lloyd Green And Jay Dee Maness performing as part of the Record Store Day festivities.
Posted by Michael Doherty at 11:56 PM