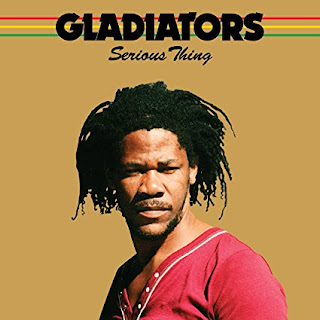 The first thing that strikes me about The Gladiators’ Serious Thing album is its cover. Is it just a portion of the cover of the group’s previous release on Nighthawk Records, Symbol Of Reality? Did they just remove the rest of the band from the photo? Weird. Though the more I look at it, the more I think it might be a different photo from the same shoot. His head might be tilted just slightly away on the first cover. Still, what a strange choice. Anyway, both Symbol Of Reality and Serious Thing are being re-issued by Omnivore Recordings, with bonus tracks. While the bonus tracks on Symbol Of Reality were positioned throughout the album (alternate versions following the album versions), on Serious Thing, the bonus tracks are all placed at the end. Two of the bonus tracks were included on an earlier release of this album, where they were positioned directly after the album versions. It is interesting that they decided to rearrange them this time. The rest of the bonus tracks were previously unreleased. All of the tracks on this CD are originals, most of them written by Albert Griffiths. This CD includes liner note by Leroy Jodie Pierson.

Like Symbol Of Reality, this album opens with its title track, “Serious Thing.” “Today you hear this, tomorrow you hear that – a serious thing.” I can’t wait to find out what we hear tomorrow, especially about that wonderful raid on Michael Cohen’s office. Could the end of this horror show be in sight? “Stop going around with your false sayin’/’Cause man must be sure of what he’s saying.” Indeed. This is a good song with a positive groove. The bonus tracks include an alternate version of “Serious Thing,” which was previously unreleased. On this version, some of the vocals are removed, with the focus being on the groove.

“Serious Thing” is followed by “My Thoughts.” I don’t particularly care for the religious aspect of reggae, which of course is often an important element, but it has never kept me from enjoying the music. And so “My Thoughts” has me smiling and bopping around in my apartment. After all, it has a cheerful, uplifting vibe. Here is a taste of the lyrics: “The lord is my light and my salvation/Whom shall I be afraid of? No one/Yea, though I walk through the valley of shadow of death, I will fear no evil.” There are two other versions of this song in the bonus tracks, the first of which is one of the previously released tracks. The second is an instrumental version.

One of my favorite songs on this album is “Fling It Gimme.” It is a lot of fun, and makes me feel good. It has such a positive sound, a positive vibe. “Anywhere at all girl you can fling it gimme, all right.” I can’t help but smile whenever I listen to this one, and I am grateful for that. The bonus tracks include another version of this song, which was previously unreleased. “Fling It Gimme” is followed by “Rearrange,” another of my favorites. The vocal line is kind of beautiful, particularly on the lines “I’m hoping and I’m praying that very soon things will rearrange/Too much innocent blood’s been shed/Our heart cries out, our souls do grieve.” Also, I dig the smooth sound of the horns. It’s a wonderful track.

In “Mid-Range,” they sing, “Can’t you see the time that we livin’ in, man you got to be on your guard.” An alternate version of “Mid-Range” is included in the bonus tracks, with the percussion featured more prominently. This track was included on an earlier release. And in “Good Foundation,” they sing, “Some people love justice, some love revenge/Some believe in building a good foundation.” This is a good song, and I especially love the way Albert Griffiths sings “’Cause a hungry, hungry, hungry, hungry man is an angry man, angry man” toward the end. A different, shorter, and mostly instrumental (except for the beginning and end) version of this song is included in the bonus tracks. The original album ends with “After You,” which has a touch of a New Orleans vibe, particularly at the beginning. I love the horns. And how about these positive lyrics: “There will always be someone to give you a helping hand/So your well should never, ever run dry/I said the sun will shine for you each day/And the moon will shine for you at night.” This song is, for me, another of the highlights.

There are eight bonus tracks, only two of which were previously released. Yes, half of this CD’s tracks are bonus tracks. In addition to the ones I’ve already mentioned there are “Bless Our Soul” and “New Song/New Vibe,” the only two songs on this CD to not be written by Albert Griffiths. They are written by Clinton Fearon. And Clinton sings lead on both tracks. “Bless Our Soul” has a cheerful vibe and carries a social message. Then in “New Song/New Vibe,” the line that always stands out for me is “Let me speak the truth quietly.” It was only a few years after the original release of Serious Thing that Fearon left The Gladiators to form The Defenders and then the Boogie Brown Band.

CD Track List
This expanded version of Serious Thing is scheduled to be released on April 20, 2018.
Posted by Michael Doherty at 10:55 PM