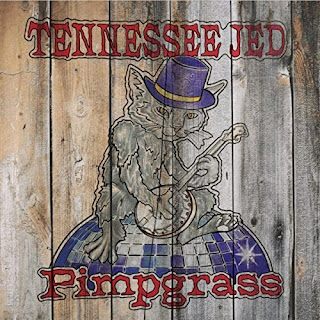 Yes, I was curious about Tennessee Jed in large part because I love that Grateful Dead song “Tennessee Jed.” (I always wonder, is the line “My doggie turned to me and he said let’s head back to Tennessee Jed” or “My dog, he turned to me and he said let’s head back to Tennessee Jed”?) But also, I am constantly in need of music to raise my spirits and reaffirm whatever faith I may still have in mankind, and bluegrass certainly does the trick. This isn’t strictly bluegrass, as Tennessee Jed mixes in elements of soul and rock. Most songs on this disc are originals, written or co-written by Jed Fisher (and, yes, Jed is from Tennessee; thus, the name Tennessee Jed). The group is made up of Tennessee Jed Fisher on lead vocals and acoustic guitar, Scott Vestal on banjo, Todd Parks on bass, Luke Bulla on fiddle and backing vocals, Josh Shilling on key and backing vocals, Andy Hall on dobro, Patrick McAvinue on mandolin, Bob Mummert on drums, and Aaron McCune on backing vocals.

The album gets off to a great start with “Over The Mountain,” which has a cheerful bluegrass sound and features good harmonies, the first lines delivered a cappella. It’s a song about Tennessee, about traveling on Route 40. “Statesville, Asheville, Knoxville, Nashville/Back and forth, forever I may roam/Jesus blessed that stretch of Highway 40 West/Over the mountain to the place that I call home.” Tennessee Jed follows that with a ridiculously delightful cover of “Shout” that begins with a brief bit of dialogue from Animal House (“Do you want to dance?”/“Yeah!”). I love when bands take a pop or rock song, and tackle it bluegrass style (something Yonder Mountain String Band is so adept at doing). This track has a great energy, and I love the backing vocals. And, yes, they do include the “Yeah yeah, yeah yeah” bit. “Shout” is one of only two covers on the album. The other pop song covered bluegrass-style is Prince’s “Kiss.” I’ve seen Ellis Paul cover this one as a folk song, so I already knew it works well in this realm. Tennessee Jed delivers a fun rendition.

Tennessee Jed slows things down with a more serious number, “Can’t Get There From Here.” Check out these lines: “When the piper starts calling, this rodent comes crawling/To a cage that I built from my bones/And the key there with me, lord, that I failed to see/In my pocket, forgotten, unknown.” I also like the sweet sound of the fiddle, which comes as a contrast to the rough quality of the vocals. That’s followed by “Sweet Relief,” a fun, playful and humorous tune about misplacing things and then finding them again (hurrah!). I like how the pace and tone of the song change when each item is found; you can feel the relief as the pace slows. In the verse about car keys, he sings, “Fifteen minutes late, how much longer can this last/I’ve called up all the places I’ve ever driven past/Oh, I lost it, I’m losing it, I found it.” And I love that he thanks Jesus when the item is found, as if a god would really help out with some item. In the verse about cell phones, there is the line “Don’t know any numbers, this surely is a curse.” Ah, yet one more problem with current technology. No one bothers to remember anything anymore. This idea came up in The Claudettes’ new album too, that people will look up information rather than recall it. With regards to phone numbers, we used to memorize a significant number of them. Now, how many numbers do you have at the ready in your memory? This track features wonderful work on banjo.

“Cells” is a cool combination of bluegrass and soul, with a gospel vibe. I dig this interesting mix of sounds. This track becomes a good, relaxed jam. “Opie’s Intermezzo” is a pretty instrumental tune, the only instrumental track on this album, featuring some uplifting work on fiddle. The opening lines of “Soul-Country Pimpgrass” are: “I walked into a record store/I knew this was dream therefore.” That’s such a sad comment on how so many record stores have gone. I’m thankful there are still some around, and ones with knowledgeable folks working there (unlike the guy working the store in this song). This song is basically the title track, and it has a happy sound, about how certain music makes us think of home. The CD concludes with a mellower bluegrass song, “The Train For To Carry Me Home,” with good harmonies and a sweet vibe. “The smell of your skin still wakes me while dreaming/I open my eyes to the wall/I still hear the footsteps, you quietly leaving/There is no reason to stall.” This one was written by Jed Fisher and Phil Bates.

CD Track List
Pimpgrass was released on March 1, 2018. By the way, there is a playful warning on the back of the CD case: “Warning: No electric guitars were used in the making of this recording.”
Posted by Michael Doherty at 2:25 PM