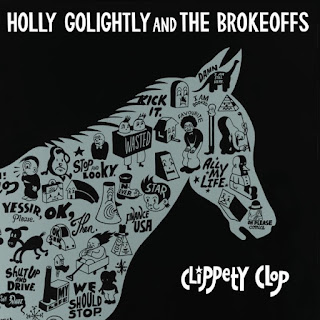 Certain things always excite me, such as going to a Red Sox game, seeing a production of one of Shakespeare’s plays, and the release of a new album by Holly Golightly And The Brokeoffs. It’s been two and a half years since the duo’s last release, Coulda Shoulda Woulda. Boy, time is just barreling on, isn’t it? Well, Clippety Clop, the new album, has that same great raw and totally delightful sound I’ve come to expect (and rely on), country and folk music with a punk attitude. It’s like back porch music if the porch is attached to a house that contains a gate to hell in the basement and a gate to heaven in the attic. But this album is different from earlier releases. For one thing, it has something of a theme running through it, with the songs all being related to horses and mules, with the rhythm of horses sometimes incorporated into the songs. The other thing that sets this one apart is that the songs are covers.

They open the album with a wonderful rendition of Jimmie Rodgers’ “Mule Skinner Blues” (here simply titled “Mule Skinner”). They give it a cool rhythm and their own spin, singing, “I like to work/I’m working all the fucking time/I can carve my initials/On a mule’s behind.” But it is the instrumental section that follows those lines that makes me so goddamn happy, and gets me moving. This is a fairly short version, just over two minutes, but it’s really good. That’s followed by “Two White Horses,” a traditional song that has been often done as a blues tune. This rendition by Holly Golightly And The Brokeoffs is more lively and playful (like in the way they use percussion on the “church bell” line).

They then go to a more recent song, the Bad Livers’ “Horses In The Mines,” a slower, bluesy number. This song was the title track to the Bad Livers’ 1994 album (I was hosting a folk and acoustic radio program at that time, and I remember we played this album a lot). That’s followed by Paul Siebel’s “Pinto Pony,” originally included on his 1971 record Jack-Knife Gypsy. I like what Holly Golightly And The Brokeoffs do with this song, particularly in the instrumental section. I dig that guitar. And they playfully add their own impression of the “shootout in the cantina,” which made me laugh. They also deliver a good rendition of Belton Sutherland’s “Kill The Old Grey Mule,” which is sometimes titled “Old Grey Mule” and here is titled “Kill Grey Mule.”

One of my favorite tracks is their version of “I Ride An Old Paint,” perhaps the most famous of the songs chosen for this album. It’s been covered by folks like Woody Guthrie, Pete Seeger, Johnny Cash, Ramblin’ Jack Elliott, and Linda Ronstadt. This rendition by Holly Golightly And The Brokeoffs is more lively than most versions, with a wonderful raw edge. It’s more fun than other versions I’ve heard, and is just a total delight. It’s followed by another fun number, “Jinny Mule.” While this rendition is not quite as delicious as the version by Big Maybelle, it is still a highlight and features one of my favorite vocal performances of the album. Another well-known tune chosen for this release is “Stewball,” a song that’s been covered by Joan Baez and Peter, Paul & Mary, among others. This version is quite a bit different from most other versions, with some prominent percussion. I really like the way they approach it. The album finishes up with “Mule Train,” a tune which has been done by folks like Frankie Lane and Bing Crosby and Tennessee Ernie Ford, and the song that gives the album its title. And as you might expect by now, this version by Holly Golightly And The Brokeoffs stands apart from all earlier renditions, and is seriously cool. It’s actually a bit slower, meaner than a lot of other versions I’ve heard.

CD Track List
Clippety Clop is scheduled to be released on May 4, 2018 on Transdreamer Records.
Posted by Michael Doherty at 11:25 PM