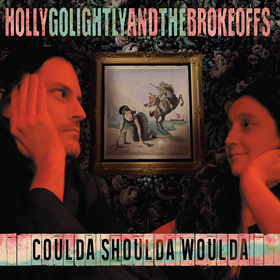 Geez, Holly is certainly keeping herself busy. She just released Slowtown Now! a few days ago. That is the first full-band album in quite a while, and it’s excellent. And right on its heels comes the release of a new Holly Golightly And The Brokeoffs album, Coulda Shoulda Woulda. Maybe it’s because of her work on that other album, but the lead-off track on this new CD has more of a rock and roll flavor, as does “Karate,” which is great. And we get more of those raw, mean, fun vibes that these guys are known for. We even get a bizarre and wonderful waltz in “Jackhammer.” Brokeoffs CDs always put me in a fucking fantastic mood, and this one is certainly no exception. There is that delicious humor, in lines like “If you’re wondering where hell is, try apartment 34” and “The giving season/A visit from three kings/Myrrh and gold and something else/Kids, they need these things.” As you likely know, Holly Golightly And The Brokeoffs are actually just two people – Holly and Lawyer Dave. And on this album they are joined by Jeff Walls on guitar for a few tracks, including the lead-off tune, “Heaven Buy And Buy.”

Just the title “Heaven Buy And Buy” is great, and the song comes on strong like the best garage tune. It’s like some heavenly and twisted garage gospel, with lines like “Did you bring your wallet/Did you bring your gun/Driving out the devil with the word of Jesus/Satan’s on the run” and “Getting down with Jesus out on the floor.” It’s like intelligent, witty folks took over the revival tent. Write ‘em a check and dance your pious ass off.

That’s followed by “Apartment 34,” which is a total fucking delight, describing the questionable inhabitants of a certain abode. I love the humor of this song’s lyrics. Check out these lines: “They have a thing for old Camaros/That ain’t running anymore/And if you’re wondering what that smell is/That’d be apartment 34/Daddy rarely wears a T-shirt/Except for metal bands he likes/Sometimes you’ll see him on the highway/Riding a Little Mermaid bike.” This song is just so much bloody fun, which of course will come as no surprise to fans of this band. Most of their material (perhaps all of it?) is so enjoyable.

The CD’s title track, “Coulda Shoulda Woulda,” has something of a raw bite mixed with classic rock and roll vibes. Jeff Walls plays guitar on it. That one is followed by one of personal my favorites, “Jump In The River.” It has something of a traditional folk flavor mixed with gospel and country, but with a sharp edge. Lawyer Dave delivers lead vocals on this track, and he really belts out the lyrics. “Sometimes I get lonesome/Sometimes I’m get down/Sometimes I get the big idea/I’m gonna jump in the river and drown.” And these lines crack me up every time: “And when I prayed to Jesus/He said jump in the river and drown.” Oh man, you know things are rough when even your savior tells you to give it up.

“Marijuana, The Devil’s Flower” is a delightful, old-time country tune about the dangers and evils of marijuana. This is actually a cover of a tune that was originally recorded by Mr. Sunshine And His Guitar Pickers in the 1950s. But Holly’s style is such that I could believe she wrote it. In fact, I thought the line “Hold your head up high and just say no” was a humorous nod to Nancy Reagan. But no, that line was in the original. Perhaps Nancy and the other idiots got it from this song? Who knows? What I do know is that this is a fun track, and I love the way Holly plays with the word “grave,” making the idea of being sent to one’s grave kind of light and amusing.

Holly sounds so sweet and innocent on “What He Does,” a kind of mellow folk/country number offering a warning about a man. “He’ll charm you, I know/He’s hard to refuse/And then he’ll come on home/That’s what he’ll do.” Holly and Lawyer Dave return to their own brand of gospel for the Sunday morning tune “No Judgment Day,” in which they sing, “No, there ain’t no guardian angel/Ain’t no savior on the way/Ain’t no hell or heaven waiting/And there ain’t gonna be no judgment day.” Amen! And that song is followed by a song that I will be adding to my Christmas play list. It’s called “Christmas Is A Lie,” and it has a sweet and pleasant vibe, even as they sing, “You keep believing/I just don’t buy/The shit you’re selling/This Christmas is a lie.” It ends with a little “Jingle Bells” tease, before the final dissonant chord happily destroys it.

CD Track List
Coulda Woulda Shoulda is scheduled to be released on CD on October 16, 2015 on Transdreamer Records.
Posted by Michael Doherty at 4:09 PM