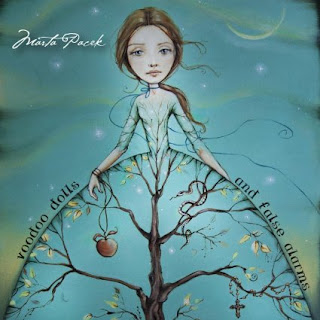 Last year Australian singer and songwriter Marta Pacek released Voodoo Dolls And False Alarms, an excellent album of original material. Now U.S. audiences will get a chance to enjoy this music, as Marta Pacek begins a month-long tour of the states. So it’s the perfect time for us to take a listen to this delicious blend of folk and country with some electronic elements.

Marta Pacek kicks off the CD with “The Hunted,” one of my personal favorites. It has a wonderful, kind of haunting (or perhaps haunted) vibe, established right away with those gorgeous “Oooh” vocals that rise from the groove before the lyrics begin. How is it that she is able to sound beautiful and also just a bit sinister at the same time as she sings, “Bearing the scars on my chest to remind me/That I’ll be forever hunting you still/I’ll be forever hunting you still.” Adding to the great feel of this track is Frank Koren’s work on electric guitar, which at one point takes over in wonderful, anguished fuzzy tones.

“Nothing Going On” opens with an electronic drum beat, which is surprising. But before you can really think about it, Marta Pacek’s vocals command focus: “Oh baby, don’t know what you believe/But you can’t trust what you think you see/There’s no evidence for conclusions drawn/’Cause he and I got nothing going on.” And then the electric guitar enters like a bit surf, which is also surprising. But from there, the song settles into a good folk-rock tune, which at moments reminds me of Tom Petty (like the way she sings, “Oh baby, don’t know what you believe” when she returns to the chorus). “Nothing Going On” was written by Marta Pacek and Neil Murchison. Brad Albetta plays organ on this track (Abetta also produced this CD).

This album contains two versions of “One Day,” a song that Marta Pacek co-wrote with Todd Clark. Both are good, though I think I prefer the second version, which ends the CD, mainly because of the presence of Maria Lynn Leven on cello, an instrument I’m always happy to hear. Todd Clark plays electric guitar on the first version.

“Favourite Thing” is a fun, catchy country tune about a regular hook-up, its main lines being, “You’re my favorite thing to do/And I can’t keep my paws off of you.” I love its opening lines: “When the night comes rolling in/You come rolling by/There’s no reason for you to call/And I won’t ask you why.” “Favourite Thing” was written by Marta Pacek and Neil Murchison.

Earlier this summer, Marta Pacek released a video for “Sometimes You Lose,” one of the most interesting tracks on the CD. This is a mellower and completely engrossing song. “I’ve been living in a bottle/Laying low where the sun don’t dare to shine,” she sings at the beginning of this track. And she really grabs you when she sings, “And nothing’s going to save me now/Sometimes you win, sometimes you lose/Some things in life you don’t get to choose.” But it’s the strange instrumental section after that which really makes the song for me. This track features Maria Lynn Levene on cello and Declan O’Donovan on electric piano.

“Thar She Blows” features Peirson Ross on banjo. That song also gives the CD its title, in the lines “There are voodoo dolls and false alarms/There are vipers hissing secrets in the dark.” That track is followed by “Not Leaving Here Alone,” another song that has a haunting quality. Here is a taste of the lyrics: “Oh it’s a far cry from where I’ve come/Breaking bones to the beat of a drum/Oh what a selfless thought/I ain't leaving here alone.”

“Pass Me Over” is probably my favorite track on this CD. It is more in the folk realm, and features some nice work on harmonica by Marta Pacek. Maria Lynn Levene plays cello on this track. There is something beautiful and even innocent in the sound, even as Marta sings, “And I can’t tell the men from the wolves anymore/Tell me what It is I should be looking for/’Cause this heart is no place for a wounded whore/Whose only desire is to conquer them all/I'm too soft for the sweethearts and then softer still/Too weak to swallow that pill.”