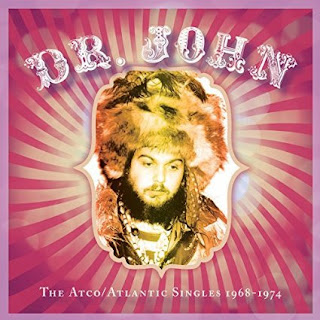 I am always in the mood for Dr. John, the Night Tripper. Last year saw the re-release of his first album, 1968’s Gris-Gris. And now a collection of his early singles is being released through Omnivore Recordings. The Atco/Atlantic Singles 1968-1974 contains twenty-two tracks (more than seventy minutes of music), including some of his most famous recordings such as “Mama Roux,” “Iko Iko,” “Right Place Wrong Time” and “Such A Night.” This collection also includes liner notes by Gene Sculatti, who offers information about Dr. John’s early career and first several albums.

The collection opens with the mono long version of “The Patriotic Flag Waver,” which was released as a promotional single. It’s an interesting one in which Dr. John sings that he belongs to “the KKK and the NAACP, the Berkeley School and the John Birch Society,” and children sing “My Country, ‘Tis Of Thee” occasionally in the background. This tune would end up on Dr. John’s 1969 studio album Babylon. That’s followed by “Mama Roux,” which was released as a single in 1968 and also included on Gris-Gris. It’s a lot of fun. “Come on down, boy, and now follow me/Wham bam thank you ma’am/Come on, boy, and follow me.” The flip side, “Jump Sturdy,” is also a fun tune, and was also included on Gris-Gris. It has something of an early rock and roll feel, particularly in the backing vocals.

“I Walk On Gilded Splinters” is a longer song, the last track from Gris-Gris. In this collection, it is presented as two tracks, as it was on the single. This is such a cool and unusual tune, with lines like “Je suis le grand zombie” and “Fill my brains with poison” and “Soon you'll be in the gutter/Melt your heart like butter/And, and, and I can make you stutter.”

“Loop Garoo” and “Wash, Mama, Wash” were the two tunes on the only single from Dr. John’s 1970 release, Remedies. Of the two, I prefer “Wash, Mama, Wash,” which is ridiculously fun and catchy. Dr. John sings, “You got to rub-a-dubba-dubba/Mama, bust them suds,” and the backing vocalists sing, “Scrub, Mama, scrub.” And I like this verse, “If you stop playing them numbers/I’ll tell you up front/You may be able to save the whole family/’Cause at the rate the things you're doin' is going/We may all be out on the street come morning,” which he delivers as spoken word.

That’s followed by his recording of “Iko Iko,” one of the most well-known tunes associated with New Orleans. It’s such a great song. I think the first version I ever heard was a live version by the Grateful Dead, and it sent me in search of other versions. In fact, it was this song and “Right Place Wrong Time” that led me to purchase my first Dr. John album, a greatest hits compilation titled The Ultimate Dr. John. I still really have no idea what this song is about, and I don’t care. It’s a fantastic tune to get you dancing, and this rendition by Dr. John is among the best I’ve heard. Enjoy. Its flip side is a medley of songs by Huey Smith, including his famous “Don’t You Just Know It.”

Dr. John also does a really good rendition of Willie Dixon’s “Wang Dang Doodle.” It’s not quite as raw and mean as some versions I’ve heard, but it’s definitely cool and has an excellent (though brief) jam. “All night long, all night long, all night long, all night long.” Also included here is a Buddy Guy single on which Dr. John appears. “A Man Of Many Words” was written by Buddy Guy, and this single, which was released in 1972, also features Eric Clapton (Clapton was also one of the single’s producers). This song reminds me quite a bit of Otis Redding’s “Hard To Handle.”

“Right Place Wrong Time” was, as I recall, the song that turned me onto Dr. John when I was in my teens. I remember hearing it on the radio several times, back when commercial radio still played cool shit. This is a funky little gem. “I been in the right place/But it must have been the wrong time/I'd have said the right thing/But I must have used the wrong line/I been on the right trip/But I must have used the wrong car/My head was in a bad place/And I wonder what it's good for.” This song was also the lead track on Dr. John’s In The Right Place, released in 1973. “Right Place Wrong Time” was a hit for Dr. John. The single’s flip side, “I Been Hoodood,” was also included on In The Right Place.

“Such A Night” is another of Dr. John’s biggest hits, and it too is from In The Right Place. It is a total delight. Seriously, if this song doesn’t get you smiling, you might want to see an undertaker. You can watch Dr. John perform this song with The Band in The Last Waltz. “Life” is also a fun song with a great groove. It was written and produced by Allen Toussaint. It’s followed by another tune that will have you dancing soon enough, “Let’s Make A Better World,” which was written by Earl King.

CD Track List
The Atco/Atlantic Singles 1968-1974 is scheduled to be released on September 18, 2015 through Omnivore Recordings.
Posted by Michael Doherty at 4:17 PM